[Perrin Lovett] - Your New 86” TeeVee Is Spying On You

Right now, while you’re reading this. Probably putting you on some list or another. I wouldn’t trust that Elf on the Shelf either.


Happy December, Friends of the Georgia Piedmont! Yeah, we have entered the final month of 2019. I hope you’re as thrilled and shocked about it as I am. And, I was just kidding about the TV. Just because it has a camera and a microphone and a transceiver and you can’t turn any of them off and the FBI says it’s spying means nothing. Have another beer, a pill maybe.


The important thing is that you bought it. Isn’t that the true meaning and spirit of this consumerist, er this holiday season? Buying things? 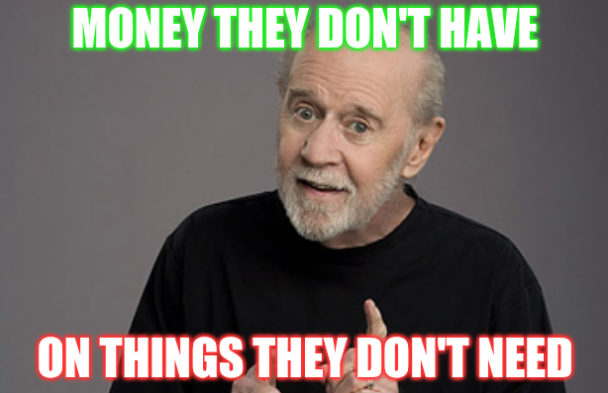 
Last week saw another great Black Friday, the day set aside for bloated, semi-conscious Americans to shuffle aimlessly through the malls and discount stores, munching on refried lard and dropping fiat on useless junk that they won’t remember buying just four months later. Well, at least they used to shuffle psychically in order to max out the cards. The Wall Street Journal and other outlets report that this year more and more folks can’t even get up off the couch. Friday set a record $7.something Billion in online “stuff” sales - and, that was ahead of Cyber Monday (color unknown). The brick and mortar traffic was still kicking along, only a little lower and slower than in years gone by. Click on the big site or walk into the big box. Same deal.


Again, the important thing is that money gets spent. That’s what it’s for. The Noo Yaak Fed ain’t flooding $100,000,000,000+ every single day(!) (forever?) into the perfectly healthy economy for nothing. While it’s true that that money is meant for the criminals at the commercial banks, the home crowd doesn’t know it. They only sense that, as the stock market is up and they haven’t lost their jobs, things are fine. Beyond fine. Fine enough to gorge at Cuck-fil-A (now a Woke™ enterprise), download some tunes and games, and load up two carts of landfill packing at Wally World. This is what the Pilgrims were all about that icy July day in 1941 at Gettysburg. Thank you for your $ervice.


The Grabblers are hard at work on a new motivational idea for next year, planning to open a joint usury-sodomy kiosk in every major mall in Amerika. The plan is to make short-term, high-interest shopping loans to the masses, while simultaneously providing daycare services for the tots. So, after you come back from H&M or Macy’s (assuming those stores don’t go bankrupt between now and then), you’ll be delighted to find little Timmy in the loving care of Sister Pistol the drag queen. Little Suzzie will inform you that she identifies as a dis-cis trinary trans-pineapple in need of genital mutilation and hormone treatment. Bobby will explain why he wants to enlist and help defeat Saudi Arabia for Iran. Or, visa versa - do the countries even matter? Laura will alternatively boast that she qualifies for a pound of flesh student loan or that she'll be giving massages to princes and celebrities in the sunny USVI. You’ll be so stoned on opium that you might not appreciate it all. And it all ain’t just for the Yanks anymore!


The spirit of mania has even swept across the Atlantic. Last Friday, while you sent your daughters into the gender-neutral restroom at Target, alongside Bubba in a Dolly Parton wig, Londoners took to the streets and shops in keeping with Black Brit Friday (which kind of sounds like something that might happen at a Birmingham cineplex, only there with machete-totting “teens”). The fun and folly gave way to something even more exciting - the manifest blessings of DIEversity. While the stiff-upper-lipped set caroused the market and nearby bridge, Mr. Bearded Khan - the recently freed CONVICTED TERRORIST and likely relative of Londinistan’s mayor - spread the gospel of peaceful inclusivity with his knife and bomb belt. Hurray! Many stabbed and several dead later, and a group of the last real men on the Island beat the dog down with a fire extinguisher and a NARWHAL TUSK. (Really, a narwhal tusk - there’s a video). Who needs knives (aside from ISIS terrorists, I mean) and guns? Well, the police needed guns, when they did what they should have done as soon as Khan (either one) first slithered out of the Chunnel. A sad ending to an otherwise joyou$ holiday sellebration.


But, for the rest who survived, there are still a whole three weeks left until that next big holiday punctuating retail season. Make the most of it. Go over your wish list in front of the telly and targeted ads and coupons will somehow magically come your way. Thanks, FBI!

Is that the red pill splashing? LG.


But, let’s not even discuss what the CIA, when they’re not running schemes like MK-ULTRA, Artichoke, Northwoods, 9/11, Mockingbird, etc, etc, says about television.