Porterdale’s roots go all the way back to the early part of the 19th century. Back then it was a community called Cedar Shoals and may have also been referred to as Boston before that. The area would continue to be known as Cedar Shoals until it was incorporated as Porterdale in 1917.


The town was named in honor of Oliver S. Porter who was in many ways the father of this town; however, to backtrack a bit, the grandfather of the town would have been Noah Phillips, a transplanted Connecticut man, who purchased several acres near Cedar Shoals in 1831 in order to start a wool and cotton factory. Over the years different owners and operations woul 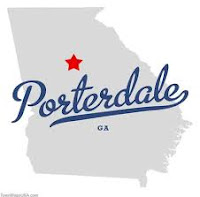 d come and go until the aforementioned Mr. Porter took over the Cedar Shoals operation in 1869. Expansions and growth with the company and the city would continue over the next several years.


Just as Oxford had a shared history with Oxford College, so did Porterdale with the factory. In 1898, a Macon outfit, Bibb Manufacturing Co., took over ownership of the Cedar Shoals Mill after having built their own mill about a decade earlier on the other side of the Yellow River.

Back in the earlier days, Oliver Porter married Julia Camp, who had been married to a Charles Camp before he passed away in the mid 1860's. Mr. Camp owned half the shares of the mill at the time that Porter would take over after he wed Julia in 1869. Julia already had a daughter with Camp, and the Porters would go on to have four children of their own. All of the Porter kids (excepting Mary, who died young) would go on to college at Emory and return to their native town in order to help the family business. In particular, their oldest son John was very instrumental in helping to build a school for the town and also to start bringing in medical care for the burgeoning mill village. One of the ot 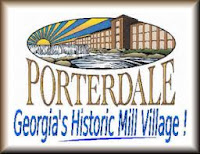 her sons, O.W., became the manager of the village general store. Both John and O.W. remained very much involved and active with the town through the years.

As mentioned earlier, Bibb MFG Co. out of Macon took over the Cedar Shoals Mills after having built their own on the north side of the river about a decade earlier. At the time, Bibb had mills in
several other cities including Macon and Columbus. In 1920, a newspaper was started up called The Bibb Recorder which served all of the cities that Bibb had mills in. The paper had a 50 year run that ended in 1970. Ask anybody around who lived or was raised in Porterdale back in the day and they'll no doubt tell you how important the Recorder was.


As the operations for Bibb grew through the 1920's and 30's more and more improvements were made to the city. Multiple schools were built in order to better serve the educational needs of the area. The first graduating class of Porterdale High School commenced in 1939. In addition to multiple stores, businesses, social clubs, and other things of the like, Porterdale 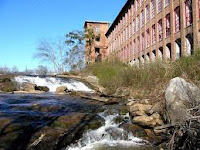 even had its own hospital during this time. In fact, my wife's mother was born at that hospital as were countless other folks throughout the years. Throughout the 50's & 60's, the Bibb Mills employed upwards of 2500 people. During the early part of the 20th century, the company actually owned most of the quaint houses one will see in Porterdale, but by the 1960's, those houses were starting to be sold to the workers.


Eventually, Bibb closed down their operations and the town fell off a bit; however, over the last decade, Porterdale has had quite a resurgence. At the center of this is the lofts that have been developed at the mill on the north side of the river and the remodeling of the downtown business district. The future looks very bright for Porterdale, GA!

The city of Oxford, just north of Covington, is a lovely city that has a rich and unique story. The city has a shared and intertwined history with Oxford College of Emory University (originally called Emory College). First envisioned in the early 1830's by the Georgia Methodist Conference, the school was chartered in 1836 and was named for Bishop John Emory. Of the original 1400 acres deeded for the school, it was decided that 330 acres would become the town of Oxford and would be laid out next to the college. The name Oxford was chosen as it was where John Wesley, the founder of the Methodist Church, had attended college in England.


The town would be incorporated in 1837, and the town lots were originally sold with a 999 year land lease that stipulated that “no intoxicating liquors shall be sold, nor any game of hazard allowed.” Although the lease rights were later converted to fee simple ownership, the restrictions on land use remained and throughout much of Oxford's history, no drinking; games of chance; or even profanity were allowed. In fact, an Emory student had to go to court in the 1920's for swearing in public. Through the years, both the city and college have grown.

When Emory moved to its Atlanta campus, the college went though some transformations but is now a 2 year liberal arts college of the Emory University system. The city of Oxford was declared the sixteenth shrine of the United Methodist Church in 1971.

To have been a college that may have had a few hundred students at any given time, Emory at Oxford ha

s produced some very notable alumni. First and foremost would have to be Alben W. Barkley, the 35th Vice President of the united States of America. Barkley was Truman's running mate in the 1948 election that everyone thought the Democrats would lose but ended up winning. Barkley is widely credited with coming up with the line, "Give 'em Hell, Harry" and was also the first VP to be called "The Veep." Prior to that, he was a Congressman from Kentucky who served in both chambers from 1913 up to his VP role. He was Majority Leader of the Senate from 1937-1947. He would serve in the Senate again afterwords until his death in 1956. Barkley graduated from Oxford in 1900.

Again, to be such a small school, it is amazing to me that they can lay claim to a

Vice President and a Supreme Court Justice! Lucius Quintus Cincinnatus Lamar (September 17, 1825 – January 23, 1893), attended Oxford in the early 1840's graduating in 1845. He was born down the road in Putnam Co. and after attending Oxford, moved to Mississippi and practiced law there. He would move to Covington, Ga in the 1850's and started his political career as a state Representative. Later, he would move back to Mississippi and was elected to the U.S. House. After the Civil War, he eventually became Secretary of the Interior in Grover Cleveland's administration until he was confirmed as a Supreme Court Justice in 1888. A historical marker on Floyd St. in downtown Covington is dedicated to Lamar.

Another fascinating and interesting bit of Oxford College history has to do with Dooley, the "Spirit of Emory." Dooley is kind of the unofficial mascot of Oxford (Emory has their own as well). First docum

ented in the late 1800's when he wrote a letter to the campus newspaper, Dooley's story is quite interesting, indeed. Originally a skeleton in the Science Dept., Dooley's legend would grow through the years. To this day, he is still a vital part of both Oxford and Emory. I actually had the rare privilege to see Dooley in person at Oxford sometime in 1994 or 95. Learn more here and here.

The city of Oxford has a lot going on right now. They just completed a new City Hall that seems like it would be more suitable for a town twice as big, but a very nice building nonetheless. Oxford is also known for their 4th of July parade and festivities that bring in a lot of visitors every year as well as their extensive trails and bike system. By the way, remember the bit at the beginning of the article about "no intoxicating liquors?" Well...technically--that is still the law of the land according to Oxford City Hall. Learn more about the city their webpage.

Thanks for reading!
-Marshall
Posted by MBM at 11:11 AM

Anyone driving through Georgia has no doubt seen the brown markers dotted throughout our state that have been erected by the Georgia Historical Commission. A lot of these markers date back to the 1950's although newer ones are being erected all the time. If you've ever wanted to find a centralized database for all of these--this is the website to go to:

In addition to markers by the Georgia Historical Commission, you can also search for markers erected by the Daughters of the American Revolution (DAR), United Daughters of the Confederacy, and the Georgia Historical Society. Furthermore, you can search based on subject, date, location, and several other criteria. A very interesting and fun website, but be prepared to spend some time...it is very addictive!

Here are a few featured markers:

The March to the Sea

Also equally worthy of attention is the main website for the Georgia Historical Society
Posted by MBM at 10:09 AM