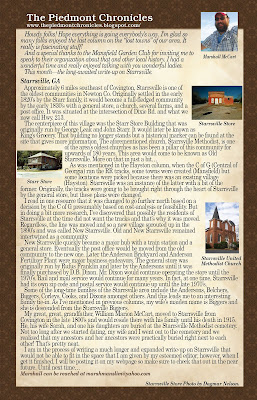 Howdy folks! Hope everything is going everybody’s way. I’m glad so many folks enjoyed the last column on the “lost towns” of our area. It really is fascinating stuff! And a special thanks to the Mansfield Garden Club for inviting me to speak to their organization about that and other local history. I had a wonderful time and really enjoyed talking with you wonderful ladies. This month—the long-awaited write-up on Starrsville.
Starrsville, GA
Approximately 6 miles southeast of Covington , Starrsville is one of the oldest communities in Newton Co. Originally settled in the early 1820’s by the Starr family, it would become a full-fledged community by the early 1830’s with a general store, a church, several farms, and a post office. It was situated at the intersection of Dixie Rd. and what we now call Hwy. 213. The centerpiece of this village was the Starr Store Building that was originally run by George Leak and John Starr. It would later be known as King’s Grocery. That building no longer stands but a historical marker can be found at the site that gives more information. The aforementioned church, Starrsville Methodist, is one of the area’s oldest churches as has been a pillar of this community for upwards of 180 years. This area would come to be known as Old Starrsville. More on that in just a bit…

As was mentioned in the Hayston column, when the C of G (Central of Georgia) ran the RR tracks, some towns were created ( Mansfield ) but some locations were picked because there was an existing village (Hayston). Starrsville was an instance of the latter with a bit of the former. Originally, the tracks were going to be brought right through the heart of Starrsville by the general store, but these plans were changed. I read in one resource that it was changed to go further north based on a decision by the C or G presumably based on cost-analysis or feasibility. But in doing a bit more research, I’ve discovered that possibly the residents of Starrsville at the time did not want the tracks and that’s why it was moved. Regardless, the line was moved and so a new village sprouted up in the 1890’s and was called New Starrsville. Old and New Starrsville remained intertwined as a community.

New Starrsville quickly became a major hub with a train station and a general store. Eventually the post office would be moved from the old community to the new one. Later the Anderson Brickyard and Anderson Fertilizer Plant were major business endeavors. The general store was originally run by Rufus Franklin and later by the Andersons until it was finally purchased by D.B. Dixon. Mr. Dixon would continue operating the store until the 1970’s. Rail and mail service would continue for many years. In fact, at one time, Starrsville had its own zip code and postal service would continue up until the late 1970’s.


Some of the long-time families of the Starrsville area include the Andersons, Belchers, Biggers, Corleys, Cooks, and Dixons amongst others. And this leads me to an interesting family tie-in. As I’ve mentioned in previous columns, my wife’s maiden name is Biggers and she is descended from the Starrsville Biggers. My great, great, grandfather, William Marion McCart, moved to Starrsville from Covington in the late 1800’s and would reside there with his family until his death in 1915. He, his wife Sarah, and one his daughters are buried at the Starrsville
Methodist cemetery. Not too long after we started dating, my wife and I went out to the cemetery and we realized that my ancestors and her ancestors were practically buried right next to each other! That’s pretty neat.

I am in the process of writing a much longer and expanded write-up on Starrsville that would not be able to fit in the space that I am given by my esteemed editor; however, when I get it finished, I will be posting it on my webpage so make sure to check that out in the near future. Until next time…

*Many thanks to Dagmar Nelson for use of her photograph of the Starrsville Store. Dagmar is a marvelous photographer. Her work can be seen at her webpage here. She is a blogger as well and that's actually how I came across her photo. I plan on doing a post in the very near future about that.

Marshall can be reached at marshall.mccart@gmail.com
Posted by MBM at 9:17 PM