Greetings, fabulous readers, and we hope this post finds you well.

A lot going on this New Year's Eve. Let's get right to it.

So the most recent Letter to the Editor over at the Citizen was penned by Archie Shepherd and is a response to a previous letter tendered by Larry McSwain & Barbara Morgan, two fellow community advocates that I hold in very high regard, in which they questioned the escalating legal expenditures being paid to Wm Thomas Craig, Esq. (WTC) by the Newton County Sheriff's Office (NCSO). As you may remember, this publication wrote about this very issue almost a month ago.

I have a few issues with Mr. Shepherd's letter. First off, no real facts seem to be given; rather, it is made clear that Shepherd just had a conversation with Sheriff Brown and simply regurgitated the information given. His argument that how the monies paid for legal expenses by the Sheriff used to come out of the "same pot" when WTC was county attorney doesn't appear to hold water. Based on the facts - county records - legal expenses for the Sheriff was always a separate line item. See graphic below: 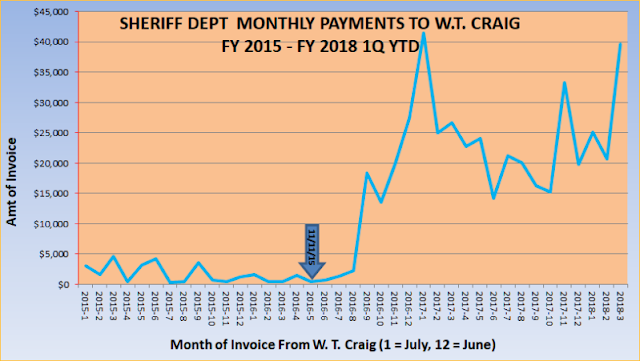 As you can see, money was being paid directly from the NCSO to WTC prior to his termination from the Newton County Board of Commissioners (BOC), as, as we understand it, it always had. So if the assumption of Shepherd, and apparently confirmed by Sheriff Brown, is correct, then that would mean that WTC was over-billing the BOC for legal expenditures that should have been delineated and separated out for a Constitutional Officer. If that is indeed the case, then one would have to wonder if WTC was guilty of an offense that can cause reprimands or surrender of license by the Georgia Bar. Interesting...


With all of that said, it is our understanding that there was a major legal situation with the NCSO related to the death of an inmate at the county detention center. Certainly that would cause an increase in legal expenditures; however, there have been many legal situations for the NCSO over the years. Are we correct in assuming that the BOC was improperly paying for this?

Sheriff Brown shouldn't have it both ways. He can't puff his chest about how he's a Constitutional Officer with sole oversight and discretion on his legal spending now, if - as Shepherd's accounting of their conversation seems to imply - he was utilizing legal expenses on the BOC's dime before.

And finally, this entire situation seems similar to the Rec. Department Director's situation. It seems as if a certain card is being played and an implying of  motives being at the core of both of issues.

P.S. - One of my New Year Resolutions is putting the Newton Co. Hospital Authority back on the top of the to do list. Look for an expansive piece on this in early January.

It's the 23rd of December so it's time for The Chronicles' Airing of Grievances.

There's probably a few dozen more, but that'll do for now.

Happy Festivus, everyone!
Posted by MBM at 10:29 PM

The long and winding story of the Stanton Springs development & the Joint Development Authority of Jasper, Morgan, Newton & Walton counties (JDA) goes back almost 20 years to the late 1990s. The original vision was a grandiose plan of creating a four-county authority and purchasing 1500 acres of land right next to I-20 in an area where those four counties converged to create, as an AJC article mentioned in 1999, high-tech companies with high-wage jobs. Having four different taxing jurisdictions coming together could spread the cost and risk and would help make a reality of a dream that maybe couldn't have come together otherwise.

It sounded pretty good. But...

The problems with this project, which has officially put hundreds of thousands of taxpayers throughout these four counties on the hook for over $1.2 billion* and has been described as a boondoggle by many, began almost immediately.

The aforementioned land was owned by a timber trust and was at the time offered for approx. $3.7 million ($2400/acre) based on information at the time. Two different appraisals ordered during this period put the value somewhere between $2.8 million & approx $5 million. So the asking price actually seemed to be fairly reasonable. So what did the property end up selling for? $7.5 million according to our information. So, to recap, the land was offered for $3.7 million, appraised for somewhere between approx three to five million, but then sold for almost twice the asking price. Why the inflated sales price? And who profited from this? So, a major money concern right there at the beginning.

Also, the original bond offering at the time - the one that friend-of-the-program Samuel Hay tried to stop in court  - was for $9 million. There were many grumblings and concerns with all of this at the time. Money, it was said, was needed for consultants, attorney fees & operating expenditures.

Fast forward a few years and the JDA ended up selling a parcel of land, described as parcel # C1590001C in the Walton Co. tax records, to JC Flex, LLC. This entity, a subsidiary of the TPA Realty Group that has had the exclusive listing rights of Stanton Springs, bought the land for approx $1.6 million in 2005. But then in 2012, the Authority bought that parcel back for $2.9 million. A gain of approx $1.3 million. This is the parcel where the Baxter Baxalta Shire facility was actually built, so in order to be eligible for the tax abatements, the land had to be owned by the Authority, which, as mentioned, it originally was, but was sold and bought back for reasons that no one has been able to explain to this publication. Again, this seemingly unnecessary flip cost the Authority - and by extension, the taxpayers of the four counties - approx. $1.3 million

But really, in the grand scheme of things, this would all almost seem like chump change. Let's not forget that the JDA issued $1.137 BILLION in bonds in 2012 for the construction of the Baxter Baxalta Shire facility, or the $85 million in "phantom bonds" that the authority issued last year. And remember when Mort Ewing resigned from the JDA in 2015? He said in the newspapers at the time that he felt like he needed to do that in order to "protect [his] assets."

One common thread in my discussions with folks both on and off the record is that the Stanton Springs project has had many problems and issues. Even its biggest cheerleaders will tell you that major mistakes have been made. And it seems to be a consensus view by many that you can lay most  of the blame at the feet of William Thomas Craig, Esq. Craig was involved with the project from its conception, and served as the attorney for the Authority, as we understand it, for the entirety of its existence up until a couple of years ago. "Hell...we figured Tommy knew what he was doing," was a line from one person when explaining a mistake that was made several years back pertaining to a particular situation. So I guess Craig can add the JDA to the Newton Co. BOC & others as those who have made him their "whipping boy." At this point it seems to be getting pretty convenient and is happening more frequently - just blame it all on Tommy Craig. Well, just like with Newton Co., I think there's a lot of other blame to go around. And, yes, it does seem pretty convenient to just blame it all on Tommy Craig. Too convenient almost. Is that just the way it is? Or is it by design?

Another emerging theme I've encountered is that some folks think it's time to just let the past be the past. That the time has come where we should just accept the fact that perhaps things weren't done as they should've been, but now we need to look forward to the future with a common goal and a shared vision. That we just need to hang in and that all of this will be worth it once everything comes to fruition.

I'm of the opinion that more attention needs to be given to Stanton Springs and the JDA than ever before. Look for future write-ups on this topic.


*updated corrected figure
Posted by MBM at 8:34 AM

[TPC] - Wm Thomas Craig on pace to make upwards of half a MILLION dollars from Newton Co. this year?

Based on our information, The Chronicles can report the following:

Wm Thomas Craig, Esquire, though fired as legal counsel for the Newton County Board of Commissioners some two years ago, is on track to make hundreds of thousands of dollars for fiscal year 2018, paid for by the taxpayers of Newton Co.

How is this possible? While the Newton BOC is no longer using Craig for legal services, the Sheriff of Newton Co., Ezell Brown, is. 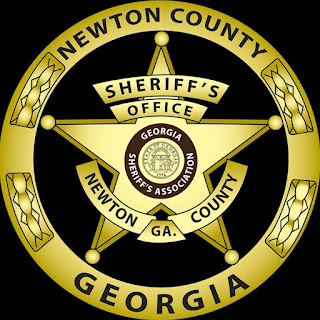 Also, ever since Craig was relieved of his duties by the Board, a very concerning trend with the legal costs of the NCSO has been occurring. Take a look at these escalating legal expenses of the Newton Co. Sheriff's office:


If that isn't bothersome enough, based on data we have in our possession, it looks as though Craig is on track to get paid approx. $400,000 in FY 2018. But if we look at the rate of appreciation of Craig's legal fees over the past three years, then that would put the amount at more like ONE MILLION DOLLARS (calculated by deriving an average rate of appreciation over the last two cycles and applying that rate to FY 2017's expenditure)!!!

Of particular concern is an invoice from Craig that shows 78.75 billable hours for an amount approaching $20,000 for a 13-day period in July of this year. I'm not even sure if that's possible.

Jeez...good work if you can get it, huh? But seriously, this really looks bad. One might easily assume that this is the Sheriff's way of trying to help Craig financially. If you think about it, that fella has lost out on a couple million dollars worth of revenue from Newton Co over the last two years. Also, no more water consulting fees from Bear Creek, nor from some of his other projects in which he was terminated. We assume he's no longer being paid "consulting" fees from the Landfill. That's probably something to check on.

All of this begs the question - Why? What is really the "why" here? It just doesn't make sense...

In the spirit of full disclosure, I'll admit that I haven't reached out to Sheriff Brown for his side of the story. I plan on doing that next week. But I felt like this really needed to be put in the public discourse now. Also, for the record, I've always liked Ezell. He seems like a nice guy & I think he's been a pretty good Sheriff. But if these legal expenses are accurate, and I believe them to be (otherwise I wouldn't have gone to press), then the Citizens of Newton Co. deserve some answers.

So long for now, until we meet again.

(North C-town Representin' * 4 December '17) - Greetings & Salutations, Covingtonians, Newtonians & everyone else. Glad to be with you today & hope it's been a great day for you. December 4th. Three weeks exactly until Christmas. My Dad always told me that time would speed up the older I got and like many other things - he was right on the money on that one.

Another week in the books and, per usual, it had its highs & lows, but as always - it was our week, and that makes it a great week.

So, what's been happening here lately?

Okay for now, friends. Lord willin' & if the Creek don't rise, we'll see you next time.