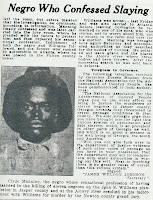 Williams Decides to Get Rid of the Evidence

So Gus Chapman, the escaped peon, met with Agents Brown and Wismer of the Bureau of Investigation in early 1921. The agents believed Chapman and were persuaded by his horrible tale. Other complaints had come into their office about the Williams plantation over the years and with this new information, they decided the time had come to drive out to Jasper County and pay John Williams a visit.

The agents went out to the Williams farm unannounced in mid February of 1921. Williams was away from the property at the time and the first person they spoke to was Clyde Manning, the black overseer of the Plantation and John Williams's right hand man. Manning spoke to the Feds as had been instructed by his boss if this situation were to ever arise. He spoke of Williams as a kind man and said that none of the workers were there against their will and that the conditions were very good. They spoke to several other black workers who all echoed Manning's sentiments. And naturally they would. They were all terrified of this man who had been known to kill peons in the past. And one must remember--this was rural Georgia in the 1920's. Federal agents or not, these men wouldn't be talking. Later, Williams would return and spoke with the agents at length and had seemingly convinced them that all was well. In fact, the facade put up by Williams would have likely worked had it not been for one simple thing: the Feds caught Manning and Williams in a lie over what had really happened to Gus Chapman on his first escape attempt. And that pretty much did it. And Williams knew it.

Williams probably felt like his entire universe would start to crumble if the Feds were able to put together a case against him. In his sick and twisted mind, he may have felt like his only option was to get rid of the evidence-- the ten or so black peons working and living on his farm. The next morning, he went by and visited Manning and told him, “Clyde, it won't do for those boys to get up yonder and swear against us. They will ruin us...we'll have to do away with them.” At first, Manning was hoping against hope that Williams meant they'd have to release them...but deep down inside he knew better and as the conversation went on that cold Saturday morning, the truth became apparent--John Williams wanted these men dead.

When it was all said and done, eleven men would be killed. The first victim was Johnnie Williams (no relation to John S. Williams). Unlike most of the peons, he wasn't drowned in one of the local rivers. Instead, he got an axe to the side of his head and was buried in a shallow grave on the Williams farm.
(Next month: Murder and Mayhem in Jasper Co....The Trial)
Posted by MBM at 10:13 AM