A Fond Remembrance of an Autumn Saturday in Athens


I've been going to Georgia football games for over thirty years now...wow, just saying that makes me feel old. Hell, I am old! I keep having these birthdays, you know? It's getting to be the end part of August and as I'm prone to do at this time o

f year, I have been reminiscing a good bit about my beloved Dawgs. I've been to some great games in Athens over the years. I was at the '82 Clemson game with the blocked punt and was at the '91 upset of them also; the 2000 Tennessee game when we finally broke the drought (and got to see the students demolish our hedges); the Georgia Tech beat-down of 2002, and of course--the Blackout against Auburn in 2007 where I witnessed a bunch of old white folks dancing to Soulja Boy. I was that guy wearing red, you know, the one who apparently didn't get the memo. All total, I think I've been to upwards of 200 UGA games and a good number of those were home games. And it's not just the games that stick out for me. At the risk of sounding sappy and sentimental--it really is the memories. Throwing the football with my Dad on South Campus back in the day; cranking up the grill; seeing folks you haven't seen in forever; witnessing the Redcoats take the field pre-game...the list goes on and on. And that's without even getting into the emotions you experience on a game day Saturday in Athens. Just that feel. There's really nothing like it. But of all those games and of of all of those memories, one always sticks out.

And truth be told, I cannot give you an exact year on this one. I know it wasn't as early as '82 and I'm positive it was no later than '85. My best guess would be 1984. I say that because I remember a lot of frustration and anxiety with the crowd for that game (and that was more of a 1984 thing as the magic of the '80-'83 run was wearing off) but for the life of me, I can't rem

ember who we played, or, as I mentioned, what year it was. I know we won though. By the way, after reading this write-up, I can imagine some of you being skeptical about the validity of my memories, but I think I've got a good answer for that. I think that what follows was just so awesome and amazing that my mind kind of went into a super-record mode and that the memories of the actual contest were diminished as a result. Sound good? Well, that's my story and I'm stickin' to it. So here we go...


I know the game was close 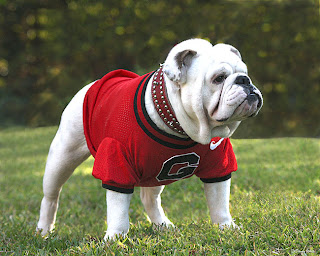 and it was pretty suspenseful. I have gone back and researched and if it was indeed the 1984 season, then it was a good bet that it was the Ole Miss game that we won 18-12. I know it couldn't have been the opener vs. Southern Miss because I remember that game vividly, and I remember the rest of the home games that year. So for the sake of the story, we'll just go with Ole Miss. So our Dawgs won but because it was so close, traffic was an absolute nightmare after the game. Now for folks who think traffic is bad after a close UGA game nowadays, they obviously weren't around back in the 1980's. Back then it was the wild, wild west. A Free-For-All. Park anywhere and everywhere...hell, park on the street. It just didn't matter. These days you get towed if you improperly park. Also, there are cops everywhere directing traffic and they have these well-researched traffic plans put into place. Back then--they did not. It was always a mess.

My Dad had a Connor Hall parking pass. We were always a South Campus family, you might say. I tried doing the North Campus thing for awhile a few years ago, but I just couldn't get into it. Tailgating only feels right on South Campus for me...but I digress... So after the game, we get back to the car and it's just total and absolute gridlock. Nothing is moving. It took us forever to get out of the parking lot and by the time we actually got on Cedar Street, we seemed to be making a pace of about a car length every five minutes. I could tell the old man was getting antsy. He wanted to get home. There was college football to be watched on T.V., steaks to be cooked, and other consumables to be consumed. After what seemed like an eternity, the old man had simply had enough. He jerked the car into park and turned to our mother (my brother was there also) and said, "Take the wheel. You'll know what to do." And with that, he was off. Walking down Cedar towards East Campus Street at a pretty brisk clip. My mother slid over into the driver's seat and laughed nervously while trying to maintain idle chit-chat with us boys. Looking back on it, I think she was a little concerned. What, exactly, was her husband up to? What did he have in mind?

I remember feeling a little bit the same. I think my Brother did too. What was the old man up to? But then, after just a few minutes, it was like the floodgates opened. We started moving down the street with ease. As we got closer to East Campus St., I was the first one to see my Father. He was in the middle of the intersection. His right hand was held up in the direction of Sanford Stadium while his left hand was motioning cars. The man was directing traffic. I think all three of us were simply at a loss there at first. This possibly couldn't be happening. By the time we were in front of the Statistics Building right near the intersection, my brother and I had broken into hyena-like hysterics. My Mother soon joined in. And then, right there at the intersection, my mom stopped the station wagon and Dad hurriedly jumped in telling my Mom to “hit it!” She gunned it and we were off. My God, we were all just rolling by this point. Laughing like crazy. But that's not even the best part. The best part was this: I was sitting behind the driver's seat and had the vantage point for something I'll never forge 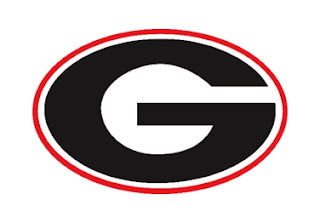 t. As my Dad was getting in the car, I happened to look at the first car stopped that had been heading down East Campus. The first car that my Dad actually stopped with his traffic cop routine, mind you. It was a Georgia fan that looked to be about my Dad's age who was also with his family. His expressions and emotions completely ran the gambit--from confusion, to shock, followed naturally, of course, by righteous indignation, briefly followed by rage, but then morphed into genuine admiration. When it was all said and done, he was actually smiling. The expression on his face at this point seemed to say, "Well played, sir. I salute you and your endeavors...I wish I could have done something like that." Man, oh man, it was so cool! We all just laughed and laughed. I seem to remember my Mom saying something like, "Oh my God--I can't believe you just did that!" My brother and I were completely in awe. My Dad just kind of chuckled and then broke into a easy smile. I think he was pretty proud of himself.

Obviously it was a big deal for me. I mean, here I am, over 25 years later, writing about it like it was yesterday. I don't know if it says something about my personality that this memory would stick out so much for me. Like, you know, the whole "anti-authority" thing, or whatever...I just know that it was a big deal for me! And it's one of the many reasons why my Dad is my hero. I think about that day often and fondly...it always puts a smile on my face. And to me, for some reason, it just seems to encapsulate Georgia football. So...Praise the Lord and Pass the Ammunition. How Bout Them Dawgs!