The Ballad of Buster Chadwick

~from the March 2012 edition of About Covington to Madison magazine~

The story of Buster Chadwick, a Newton Co. resident, is a fascinating tale of a man and his music; a very interesting life that coincided with the development of Country & Western music as the major, established genre that it would later become. 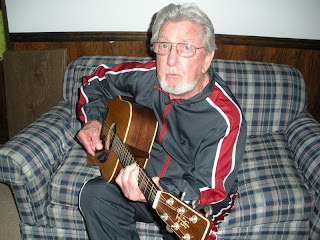 Mr. Buster's story starts in Sulphur Springs, AL in 1929 where he and his Mother lived until his Grandfather passed away in 1939. Apparently, somebody had mentioned that you were to shoot a gun three times to honor the recently deceased. So naturally, to a ten year old boy, this seemed like the thing to do. He got a gun but actually loaded it twice and then used a stick to pull the trigger. The gun popped back and knocked Buster down. As he later said, “It's a wonder I'm alive today.”

He and his Mother would later move to Rising Fawn, GA and it was there that Buster got his first guitar and started to develop his love for music and singing. At this time, there was a show called “The Grand Pappy Show”on an AM radio station coming out of Tennessee that featured music ranging from Chet Atkins to The Louvin Brothers. It was this show that would light the fire of Buster's musical passions. He was also a huge fan of The Carter Family as well. Soon thereafter, he got his first guitar and hit the ground running.

He decided to quit school in the 8th grade in order to pursue music full-time. His first regular gig was at a venue called the Wagon Wheel where he played every Wednesday, Friday, and Saturday evening making a dollar per night. 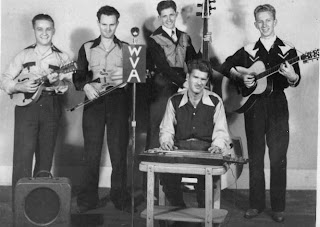 During this era, in which Country Western music really started to get big, you did two things as a practicing musician. You played as many shows as you could, and you also would try to get a regular gig at one of the local AM radio stations. Mr. Buster would join up with an outfit known called The Koffie Cup Hawaiians that had a regular show on WDOD out of Tennessee. In addition to the radio show, the group would also play all over the Southeast opening for the likes of Country legends such as Roy Acuff, Bob Wells, and Eddy Arnold.

This is a good time for a quick aside. There's a line in the movie, “The Blues Brothers,” when the waitress says something like, “oh, we play both kinds of music—Country and Western.” That's a funny line from a very funny movie but that distinction is quite real. Country Western, also known as Country & Western, or Western Swing, is very much a different genre from Country music. Country is bluegrass- based; Country & Western is Western Swing-based. Mr Buster will let you know right quick about that distinction and that he is a Country & Western man.

But back to our story, after the Koffie Cup Hawaiians, Mr. Buster did his own thing during the mid to late 1940's playing around the South with a mix of different musicians. At one show, a young gal by the name of Dottie West opened for him.

In 1949 Mr. Buster got married, started a family, and decided to get a regular job. He was thinking that he was done with the music business, but the music business was not quite done with him. The 2nd act of his musical life started with a phone call from a group out of Chicago that did sort of a “Lawrence Welk type of thing.” It paid $100 a week...really good money at the time. But after a couple of months, Buster just couldn't stand it anymore—he missed his Country roots. Later, he would actually join a traveling carnival as a featured musician. He wasn't able to stomach that for very long either and quit in between stops in Alabama and decided to walk and hitchhike his way back home. One night he actually had to sleep with his guitar in a ditch! Now that's Country!

After a while, Buster got back into radio doing music with a new group on WATL in Atlanta, GA. This would start his Georgia connection. It was a pretty good gig and the band would also tour pretty extensively during this time of the mid to late 1950's. By the way, the announcer for that station in Atlanta? Mr. 16 Tons himself, Tennessee Ernie Ford.

By 1960, Mr. Buster figured he was done with music for good. The time had come, he felt, to concentrate more on becoming a businessman and raising his family. He loved music but just felt like he needed to do something more stable to be the father and husband that he wanted to be. 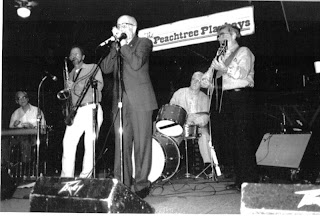 But...the musical ballad of Buster Chadwick had another chapter coming down the pike. In the mid 1970's, after he had done well for himself in the business world and raised a wonderful family, Mr. Buster decided he had to get the music going again. He started a band called The Peachtree Playboys that mainly played political events in and around Atlanta. In 1986 the band was tapped to do The Wild Hog Supper, the Georgia Legislature's annual throw-down. This gig would last for 20 years up until just a few years ago. During one of these shows, Mr. Lester Maddox, the former Georgia Governor, jumped up onstage and played harmonica with the band for a few tunes and brought the house down! In 1993 Mr. Buster was inducted into the Atlanta Country Music Hall of Fame. It was a great accomplishment for a man who was involved with the genre from its earliest days.

I truly hope you enjoyed reading this as much as I did writing it. I just felt like it was a good story about a good man, and it was one that I wanted to share with you. I'd also like to thank Buster's lovely wife Linda who helped facilitate the interview and helped get me the pictures. Until next time...
Posted by MBM at 9:17 AM