I was out in good ole Mansfield, GA today for a family reunion when I was reminded of this historical marker that I've always found fascinating. Way back in the old days, a lot of small Southern towns had their own semi-pro baseball teams. Sherrod "Sherry" Smith played for the Mansfield team in addition to others such as Newborn and Madison. He went full-on pro in 1910 and ended up winning over 100 games and shutting out Babe Ruth in a World Series game with two strikeouts. Smith was the "greatest pick-off artist who ever lived," according to Ruth. The stats seem to bear this out: In over 2,000 innings pitched and hundreds of starts, Smith only gave up two stolen bases in his entire career. Born in Monticello, Smith and his wife are both buried in Mansfield. Here's the marker: 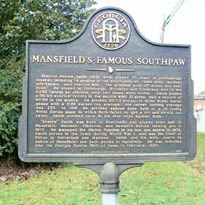 And here's the text:

Sherrod Malone Smith (1891-1949) played 23 years of professional baseball including 14 seasons in the major leagues. Babe Ruth, another left-hander, said that he was, "the greatest pick-off artist who ever lived." He played in Pittsburgh, Brooklyn and Cleveland and in the 2,052 innings he pitched, only two bases were stolen. Smith posted a 115/118 won/lost record in the majors with 21 saves, and a record of 67/39 in the minors. He pitched 30-1/3 innings in three World Series games with a 0.89 earned-run average. His career batting average was .233. In 1916, he pitched against Babe Ruth in a 14 inning World Series games in which Ruth failed to get a hit and struck out twice. Smith doubled once in his five trips against Ruth.
"Sherry" Smith was born in Monticello and played town ball in Mansfield, Madison, Elberton, and Newborn before turning pro in 1910. He managed the Macon Peaches in his last pro season in 1932. Smith served in the Army during World War I, and was the Chief of Police in Porterdale and Madison. Smith and his wife, Addilu (a native of Mansfield) are both buried in Mansfield. He was inducted into the Georgia Sports Hall of Fame in February, 1980.