Ellis Millsaps: How Bout Them Dawgs?

This (21-22) is the best year in Georgia sports history– at least in my recollection. The Braves won the World Series and the dawgs won a National Championship–the whole shebang ,not one of those 80’s split decisions. The only year that comes anywhere near is 1982- 83, my first year in law school, when the Braves won the National League West, nosing out the Dodgers, and the roundball dawgs went to the Final Four.

So in honor of the dawgs I'm going to talk about dogs I've known and loved, starting with Garbo, a golden retriever I obtained when she was a puppy and I was in my mid-twenties.

Garbo liked to drink from an early age. It started the summer she was a puppy, That summer my friends and I played volleyball on Sundays in a public park. ( It was there on one of these occasions that I first had a conversation with my future wife of 40 years.)

These gatherings were usually accompanied by a keg of beer. You know how a keg of beer in a washtub of ice will soon develop a donut of beer around the tap as the party progresses? Well Garbo picked up on that quickly and kept the donut clean. While she’d walk with me to these events, she often left slung over my shoulder like a fox stole. And she wasn’t exclusively a beer drinker; go to bed with yout Cognac unfinished and she’d take care of it.

My next memory of Garbo is her having puppies on a blanket in the dining room of our mansion at 69 26th Street in Atlanta. ( At that time, 1978, five of us rented the place for $500 a month. It is now appraised at 1.5 million.) The father of the puppies was a handsome golden retriever who lived on our street and for some reason liked to visit us.

The puppies just kept being birthed, 3, 5,7 and finally 11 perfect specimens and the mother proud and in good health. ( I don't think she drank during her pregnancy.)

When the time came Cynthia and I took Garbo with the 11 puppies for their first trip to the vet. I don't recall how we got 11 puppies into the waiting room.  I probably just put them on the ground and they followed their mother in. At any rate they weren't in a box when we all got in to see the doc.

The veterinarians' workplace was set up like others I've seen since. Outside the examining room a long (as I remember it) hall led to an exit where one settled one's bill before leaving.

This was not Garbo's first rodeo. We all sat in the vet's office, Garbo sitting looking up at the vet with her offspring all around her doing the same as he admired the brood. Then when he turned his back to ready syringes or whatever it was as if a telepathic signal passed from mother to pups.  “Okay kids let's make a run for it.” In an instant she was walking at a brisk pace down the hallway  with eleven (have I mentioned the number?) adorable toddlers waddling behind her single file.

(“I don’t reckon I’ve ever told you about my old grandpappy Old Reliable.”

After the laughter subsided we called Garbo back to the office, the puppies following their mama. It is among my most pleasant memories, World Series and National Championship aside.

Ed. note: Da is currently working on the 2nd dog piece & I can't wait to read about Ginsburg, who was most assuredly a "Damn Good Dog." - MBM 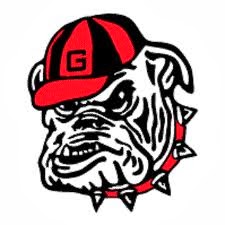