Maybe the Dawgs will repeat. I certainly hope so. They seem to be competitively positioned for  next year. Marshall could give you a more informed opinion on that. My limited expertise is on baseball, which has been berry berry good to me. (I didn't realize until after I was finished with part one of this dog tale that during that same twelve month period as the World Series and the national championship Georgia Tech won the ACC basketball tournament.)

But as I said last time, this ain't about them dogs. It's about Garbo, Chance and Ginsburg. We left off where Garbo had puppies. I sold those puppies for enough to buy an expensive baseball glove and some very fine wining and dining.

One of the eleven was remarkable in his retrieving skills. Garbo would always retrieve a stick thrown into a lake. George Washington couldn't throw a stick far enough that she wouldn't swim out and bring it back, but one of her puppies would dive in the deep end of our neighbors’ swimming pool to retrieve a rock from the bottom while Garbo looked on with an amazed “that's my boy” pride.

She was my constant and faithful companion for years. When I’d ride my bike from 26th Street to Little Five Points to see a girl (this before Cynthia and the puppies) she’d run along beside me, I in the street and she on the sidewalk. We’d take a break at the halfway point in Piedmont Park where she'd take a swim in the lake to cool off, then on up Virginia Ave., right on Highland, then left on North Ave, I'd guess about a five mile excursion.

Later, when Cynthia and I lived on St Charles Avenue in Virginia Highlands, she'd walk with us to Atkins Park Delicatessen. When we arrived we’d tell her to sit and stay. She'd sit outside the door while we dined, greeting new customers until we came back out. They should have paid her.

Garbo was in our overloaded Dodge Dart on our way to a new life in northern Idaho when it broke down, fortunately near Dalton, Georgia where my nephew Les and his wife lived. We left Garbo and most of our possessions with Les and proceeded  by bus to Coeur d'Alene. Garbo had one black puppy in Dalton that stayed with Les and Ellie after we retrieved her three months later. She then lived with us for three years in Athens where my son Jack was born, and when she saw we weren't going to get rid of him like we did the puppies she devoted  the rest of her life to being his guardian and protector. 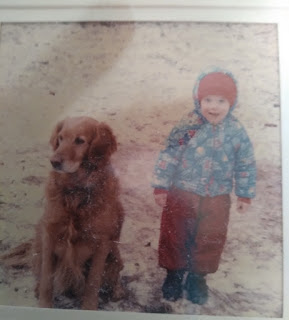 Here we see that while the one- year- old is focused on the camera, Garbo is doing her Secret Service sweep of the venue.

I see I may have doddered on past my and perhaps other people's attention span, so we'll have to wait for a third installment to hear about the rest of them dogs.