As we understand it, tomorrow night is when the Newton Co. Board of Commissioners is supposed to be taking up the recomendations of the Solid Waste Citizens' Committee. I pretty much liked everything they had to say, but I did offer up these changes and additions in the form of a memo I posted on my FB:


I pretty much agree with everything that the Citizens' Committee recommended but with the following changes & addenda:

* For the short-term, rather than go from 11 to 5 centers, I think 7 would be the magic number.
* I still have reservations about a Solid Waste Authority. We've seen what the Hospital, Airport, and Industrial Development Authorities have done to this county. As a rule, I'd try to avoid any state-sanctioned authority whenever possible.
Other than that, I like what the Committee had to say.
A few other things:
- We've got to get rid of Junior in my estimation. Simply. Have. To.
- If we do go to 7 centers, or 5, or whatever, let's send that trash from the centers directly either to Lamar Co. or to Pratt Industries. That'd be less trash in our landfill and less trucks going by Spring Hill, and if we ship it and take care of transportation costs, it could at least be close to a net-zero-sum game.
I always think about when my wife's Uncle, Jerry Prosser, ran the landfill. It wasn't a money-maker back then by any stretch, but we were at least close to breaking even. At a minimum, that's what we need to be doing now. There is no damn excuse for losing $2 million per annum. It's just, excuse my french, bullshit.
The big question is the why - why have we been doing this for so long? 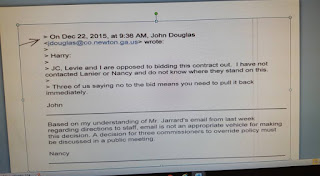 Pretty good, eh? Maybe so...and if anything is factually incorrect or just otherwise wrong, I'll just remember my Reagan and say, "I'm more of big picture kind of guy." Sure. Why not?

So, Junior Hilliard. A problem, no? And we overpaid him by $50K this last time around? That true? Jeez...

So apparently Lanier Sims and Nancy Schultz were ready to shit-can his ass but, according to our sources, John Douglas sent the above email to Harry Owens. And by the way, Owens resigned the next day, allegedly, as we understand it. Many are wondering if it was legal for Mr. "Pandering" John Douglas to do this. We studied up on it, and in our humble estimation, we don't think he was supposed to do it. Of course, in the email, JD says he's speaking on behalf of Levie & JC, but one has to start hearing the lyrics to a certain Elvis Costello tune. I mean, their name ain't on that email. To wit:

My, what sordid webs and all that. Why would he send that email? And really folks, isn't it time for him to just move on already? Gosh...

- A Conversation with the Chairman -

Talked w/ Keith for about a half-hour this morning. Always enjoy talking with him. You can set your watch to it, though - he'll always get after me about something I said about him on FB even though he says he doesn't get on FB anymore. I always just let him get after it. He probably needs that.

But, on to the convo:

As I'd heard from other sources, while we got more rain in this 100 year flood than the 100 year flood we had about six years ago, the response and work done by the county roads department was much better this time around. I don't think it's any joke, y'all - the Newton Co. Roads Dept. is kickin' ass and takin' names. I'm proud of 'em...

And there was a lot more, but it was just a lot of "blah, blah, blah," and I pretty much tuned him out.

Hope all is well out there!