Greetings, you beautiful, sweet, smart & savvy, and lovely readers. Welcome to the first Sunday Edition of 2016. We're so glad you've joined us, and we've got many tasty morsels for your reading pleasure this fine Georgia morn.'

We're now into the middle of the month of January, so you know what that means, right? The power elite, whores (political & sexual), the lobbyists, and the rest of the assorted cast of characters have descended upon the ATL and the Gold Dome like the swarm of locusts they surely are. Egad! Or, perhaps, EMMERGERD!!! Lord help us, and Jesus take the wheel indeed. There just ain't no tellin' how stupid and full-on retard that crowd may go in any given year. All we can do is what we can do. Keep the light on those roaches, rats, and sociopaths, throw up a prayer to the big guy, and maybe even to the Holy Spirit and Mary & Mary for good measure, and just hope that they won't actually go ahead and just burn and destroy the greatest state in the Union for at least one more year.

Where to start? That's a good question. How 'bout Chairman of the Board, Newton Co.:

- Per a few sources, Levie Maddox has now bounced back to studyin' up on running for Chair. After all, he made the motion to shit-can Wm. Th. Craig, Esq.! He got dibs on dat! Well...the thing of it is, is this: hell, he could probably win the GOP nod. Because, this is, after all, Newton Co. we're talking about. Lawd, lawd!

- On the other side, Phil Johnson looks like a lock to be the only Dem running. You see, the Donkeys do it differently now. They keep their powder dry, and keep a tight grip. ON EVERYTHING! And that certain Madam Chair has let it be known that only Mr. Johnson will be qualifying with their organization. Hey, slate-of-8, you don't like that? Think it's "unconstitutional" or whatever. Hey, it's a free country. Get them petition forms from the BOEl, and get to petitionin'! An outsider that no one knows about who just moved here? Good luck with that. In the spirit of full disclosure, my potential Free & Independent run for Chairman is on ice but is ready to be mobilized contingent on what we see in March.

- BOC 5. Tonto sez Moore is now up to a 62/38 split on odds of winning vs. wisher-washer. He keeps building up an alliance in which, I don't care how much money Jimmy B. & them raise, it ain't gonna matter!

- BOC 1 - word on the street is that that Super Trooper is going to run and will be utilizing a certain young buck that's been impressing everybody as his primary consultant. Sounds kinda good. I believe we'll see at least 3 qualify for this one, including the incumbent Panderer. Why, Lord, why? Because it's John Douglas, and because this is Newton Co.

- One of my favorite C-town groups - Chris, Jon & Scott - played a show at Amici Covington Friday night. Man, these guys a great! Tearin' up some Stevie Wonder and then rockin' Everlong by the Foo Fighters in the same set. Well done, Gentleman. Well done!

- The Irish Pub that will be opening in March on the east side of the Covington Square will not only be the premier music venue in C-town, it will be one of the best in the entire state. As someone recently said, it's gonna make Smith's Olde Bar look like Sassy C's. As an aside, I'm going to be the primary booking agent for this venue - Irish Bred. More to follow, keep an eye out.


- Last Sunday edition I mentioned probably my 3 favorite C-town artists: Elise Hammond, Cindy Murphy & Carol Veliotis. This edition, I'd like to mention possibly my all-time favorite artist, Jori Gray Grozier. She's just so talented and amazing. Also, she has great musical tastes. Jori gave me Joni, and an appreciation of a dirty martini, and love, truth, justice and wisdom when we spent some time together in what seems like a different lifetime ago. I love you Miss Marjorie, and I always will!

Got to get out and about some last weekend. Me and the Missus eased on down to Milledgeville, GA and had a capital evening out on the town. Had some killer food and got to see a set of an amazing group - The BitterRoots - and just truly had a fine time.

The next morning we loaded up and took that drive down to one of my favorite cities in Georgia, Sandersville. I'd been wanting to see their museum at the historic jailhouse that they did which is exactly what we're working on here in the home county. Lovely, isn't it? 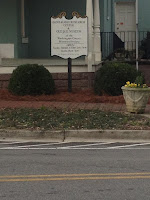 Then we took that beautiful drive up to another of my favorite towns in the GA Piedmont, Sparta, Georgia. Man...I don't know what it is about Sparta and Hancock Co., I just know I love it down there. We'd been getting reports that Her Majesty, the beautiful and glorious 2nd empire-design Courthouse that tragically burned back in 2013, was really coming along with the rebuild. It made my heart smile to see it. It really did...

- Am currently in negotiations with Amici Covington for the TPC Top-40 Dance Party. I've got a line on a DJ, and it's just going to be awesome! Probably March, maybe April. Keep an eye out, k?

- Am about to officialize pretty much all of my side endeavors, going concerns, projects, etc. into a sole proprietorship with a business license. I'm thinking:

Whatchya think? I'd like to go w/ C-town, but am studying up on some cheap space in Porterdale since I think they charge less. Competition in government - now that' what I'm talkin' 'bout! It gets me hot, bothered & so excited! Oh my gosh...oh, yeah....AWWWW YEAHHH!!!!

- Word on the Street (Tonto Network) -

So many of us got the memo. We get the picture. But only as much as we possibly can. There's just so many moving parts. It's...something else. I think what I posted on my FB earlier in the week sums it up best:

Again, because I think it bears repeating:
"Between the idea
And the reality
Between the motion
And the act
Falls the Shadow"
- T.S. Eliot
Also, this one:
"There's two sides to every story, then there's the truth."
And a final one:
"If I claim to be a wise man, then it surely means I do not know."
Regarding Newton Co., I've done my research and have been studying up; I got my theories, hunches, and gut feelings, but then it seems like something will happen, on an almost daily basis these days, where I'll have to reexamine and adjust. It's all so dynamic and quite interesting.
This much I truly believe to be true - there's been some hijinks & shenanigans; some bad decisions made by a fair number of folks; but more than anything, I truly believe it is the usual suspects: greed, thirst for power, ignorance & a bit of the Fear.
I think it's going to be something else the next couple of weeks to couple of months.


Until next time, gang.