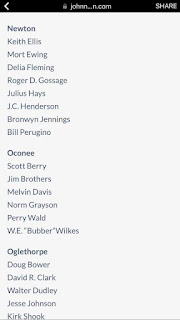 Johnny Isakson, Chamber darling and well-known RINO, has announced his leadership teams and committees in Georgia, including here in Newton Co.

Quite the team you've assembled there, Johnny...

Henderson, a 6-term Democrat here in Newton Co., follows in the footsteps of David Scott, a Democratic congressman in Georgia, who has also endorsed Isakson.

Many over the years have voiced their concerns and disdain for Senator Isakson as an out-of-touch and establishment politician. In this writer's opinion, this doesn't look to shore up his support here in the home county.