This is the Stars & Bars: 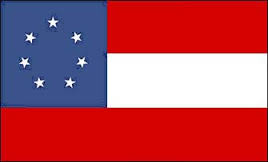 Also known as the First Flag of the Confederacy. This particular one was used early in the war. As states joined the Confederacy, more stars were added. This is the flag that the original, and now current, Georgia flag is based on. It is a beautiful flag, and it is a testament to history and heritage. I love this flag; I have no problem with it, and I think a lot of folks of color feel the same way.


The following is the Confederate Battle Flag - it is NOT the Stars & Bars, although many people get mixed up and think it is. This was the flag that was incorporated into the Georgia state flag as a show of defiance against segregation and civil rights for minorities. I have a problem with this flag, as do most folks of color:

Hope that clears a few things up.