The Piedmont Chronicles
6 May 2017

Greetings, dear readers, and what a glorious day we seem to have on our hands here in the home county.

Last night magic struck, once again, at the little groovy pizza joint on College Ave as the great ones - Chris, Jon & Scott - brought that good groove, soul & cosmic feel-good back to the vortex, like they've done so many times before. 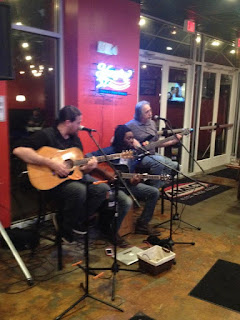 I'm not sure if Christon is human; I think he may be an angel or something. Little kids are captivated by him, women love him & the men folk want to be like him. He sings like almost no other and he can play that drum box thing & it sounds like a full kit somehow. And Jon Lansburg is easily one of the best guitar players in C-town & he probably sang lead on upwards of a third of last night's tunes. Scott, who is THE best bass player in our neck of the woods, was even throwing in some third parts on the harmonies. It was just incredible.

There was great fellowship & palaver amongst the assembled body, and much dancing, and much rejoicing. The spirits were flowing and the lovely ladies behind & in front of the bar were top notch, per usual, and they've got a fella now helping with things. He's gonna be a great barkeep, we think.

Basically, there was just no other place on the planet that could have afforded the feels & sounds  found last night at Amici Italian Cafe - Covington.

Show highlight: "Could You Be Love," by Bob Marley

Lots of new covers were thrown in the mix last night as well.

CJ&S! They just keep getting better & better and they've been so good for so long already. It's something special, for sure.