Saying So Long to The Bitteroots: A Fitting Farewell to a Great Band

This past Saturday, the 21st of January, this author was able to attend the farewell performance of one of my all time favorite groups - The Bitteroots.

As bassist & founding member Bill Taylor said - capturing my sentiments exactly - while this was certainly a celebration of a great 15 years & its corresponding legacy, it was, ultimately, a "bittersweet" moment.

I'll never forget the first time I came across this kickass crew. January of 2016. Quite simply by chance, the Missus & I had taken a road trip to Milledgeville, GA to stay the night & check out the scene & came across this incredible group that we'd later learn had a fellow Covingtonian in it - the aforementioned Mr. Taylor.

The sounds were sensational, and the songs were excellent.

Over the years I've followed The Bitteroots intently & have written about them a time or two, or three or maybe even four in this space (also wrote about them in my old Covington News column).

When I heard the news that after a decade & a half the band had decided to call it a day, I was certainly sad; however, when we found out that they were going to be doing a farewell concert, I immediately told my wife (this was months ago) - "we've got to go to this!"

It was such a great way for such a great group to go out. On Top. Kicking Rock & Roll ass w/ reckless abandon.

The Bitteroots formed in 2008 & was comprised of Mike Davis, Michael Koetter, Daniel Shockley & Bill Taylor. Bill & Mike, on bass & drums, respectively, would be the two band mainstays throughout the years & were always an amazing rhythm section.

Early on, the band was mainly just a vehicle for hanging out & jamming, playing the occasional show here & there. It was a few years later when the magnificent Laura Dees joined as lead singer that the band really got going.

Later, the other key pieces of the puzzle - Derron Nuhfer on sax & the incomparable Kyle Bryant on guitar - is what lead to The Bitteroots really blossoming & becoming one of the top bands in Georgia.

Over the years the band would add & lose pieces, sort of a natural ebb & flow you see w/ many bands that make it for the long haul, and there were others who also contributed along the way including guitarist Greg Sims until the final incarnation for the last few years would see guitar gunslinger PJ Poellnitz join Davis, Dees, Nuhfer & Taylor as the final edition.

Well, at least until the final show...

As I said at the top, this really was one of the better shows I'd ever seen.

Original drummer Mike Davis was unavailable, so Michael Beavers, a well known, highly regarded local drummer, filled in, w/ the ace in the hole being the addition of Allgood percussionist Rob Sumowski (that dude was LIT!).

It was really great, too, to see Kyle Bryant join the band for a few as well as Greg Simms.

From those opening notes of This Town, that old familiar feeling returned, and the band proceeded to get a couple hundred thousand feet above sea level for the next almost two hours.

The played all of the classic hits - Memo, Defenseless, Desperate, Try Me Again, et al, but they also broke out some deep cuts (Pete from their second album) & some newer tracks (Let's Go amongst a couple of others).

While the band had always developed a reputation for playing at least a handful of great & eclectic covers in each show (The Meters, Huey Lewis, Springsteen, Zeppelin & all points in between), they decided that for this one - the last one - they'd only do one. They went w/ a great selection - Dolly's Jolene.

And by the time you got to hearing about that 'Preacherman' in the finale the crowd was lathered up into a righteous frenzy.

Again, it was just outstanding.

You can listen to the soundboard mix of the show here if you'd like. 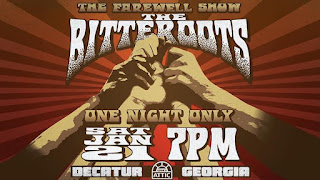 For starters, in my interview w/ him on Sunday, Bill basically said never say never & he's thinking that you might just see a reunion show a few years down the line.

For the record - I think that'd be a fine idea.

Also, you may see one more album release - perhaps a mastered live version of this show - fairly soon.

As for the players,

As some of you reading this may know, per usual, Bill will be keeping himself busy w/ his multiple other music projects as will Derron, who stays busy playing, but especially working the controls in the studio. PJ is actively on the market for a new project & w/ his skill set I don't think he'll have any trouble finding something that suits him.

And then that takes us to Laura. That incredible force of nature. As I understand it, she may be taking a break from the music. I sure hope it's not for too long.

I'll go w/ Bill's words the day after the show to close this piece:

Last night was our 200th show and our 40th show at Eddie’s Attic. After everyone had left last night, we were all out on the Eddie’s Attic patio, and we all raised our glasses to the fun times, incredible shows, memories and stories from road trips, favorite moments, favorite shows & writing songs. We laughed, we cried, we laughed some more. There were truly so many high points with this band over the years.
But mostly, last night was about friendship. Many times in the past, I would enjoy the road trip just as much as playing the show. So many miles and miles of laughing and telling jokes and listening to music.
There were a lot of laughs, memories, stories, tears, magic, and love in that room last night. It was truly a special night to close out 15 years of this amazing band and chapter of my own personal musical journey.
Thanks to all the fans who supported us for so many years. You are the ones that made this all happen made it so much fun for us.
Thanks again everyone for an incredible 15 years. I will cherish the memories.