The Bitteroots Return to Covington this Saturday, February 24th 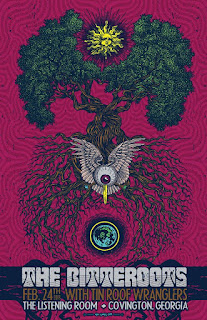 As I've written about a few times in another publication, this is easily one of the tightest & most enjoyable groups you'll ever see in the COV. A unique and enjoyable blend of Jam & Roots Rock, Jazz Fusion & Pop, their originals are truly top shelf & are complemented by a musician's musician-approved assortment of choice covers.

Here's a recap of the rub of The 'Roots :

"Covington native & bassist Bill Taylor and drummer Mike Davis originally formed the group in 2008. As a rhythm section, these two are one of the best I've ever seen. Both are quite proficient and can really impress with their chops, but they are always together - an interlocking bass & drum machine, as it should be, and they lay down the foundation for the band's excellent sound. Speaking of the band's sound, many have described it as Jam Rock or Roots Rock, and that's certainly an apt description; however, there are other elements in play as well, in this writer's estimation. For one thing, the group has decided Pop sensibilities, and there's nothing wrong with that. While they have the ability to explore and expand songs with their jamming and feeding off of each other, these songs themselves are well crafted with an emphasis placed on vocal melodies, smart chord progressions, and the aforementioned rhythmic elements. It's a marvelous sound! And just below the current there are some Jazz elements as well. As I mentioned in an article last year, I'm a big, big fan of this bunch. Ever since I first saw them a few years back in Milledgeville, GA, I count them as one of my favorite groups. And I'm not just talking Georgia bands, or unsigned bands, I'm talking all-time. Seriously, they're that good. But perhaps the key to this band's superb sound is the lead singer, Laura Dees. She is so good! Comparisons have been drawn to Melissa Etheridge and Janis Joplin, but Laura really has a sound all her own. Her range is very impressive, but the power of her voice is what really takes it over the top. A very strong voice, with depth and warmth, she is an absolute joy the hear. She's also very fun the watch. Her stage presence is incredible; she's always engaged with the crowd. And you can tell she's giving it 110% every time, always turned to 11, if you will. It's something else...

And quite possibly the Piece De Resistance of The Bitteroots is saxophonist Darron Nuhfer. You might not normally expect a sax in this type of group, but trust me - it works. It thickens and warms the sound just right, melodically, as well as rhythmically. It's just right."

Rounding out the group are newer members & dual tandem guitar team, Mark Evers & Greg Sims, who by all accounts are both excellent additions to the group.


I recently had a chance to chat with Bill a bit to get the 411 on what the band has been up to & what they have in store for this local show. I'm excited to report that they'll be playing several songs off their highly anticipated, soon-to-be-released new album. And for you longtime fans, you'll be happy to hear that classic originals like "Defenseless"; "Desperate"; "Memo" & "Under the Big Sky" are on the set list as well. Also, it's sounding like they're going to outdo themselves with the covers lined up. A deep cut from REM's first record; a Zeppelin tune; an early Clapton number; along with one by The Boss and - most exciting - a Huey Lewis & the News track amongst some others are on tap for Saturday night.


Doors open at 8 w/ the opening act starting around 9. Again, that's Saturday, February 24th. Should be a helluva show.

Thanks for reading, and we'll see you right back here next time.