So Many Towns and Cities in the Great State of Georgia: Thunderbolt Version 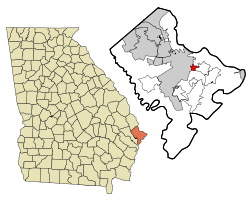 The Great state of Georgia, according to Wikipedia, can lay claim to some 500+ incorporated cities and towns. When you factor in unincorporated towns, villages, and communities; that number easily eclipses 1,000. So many cool towns, and a lot of great names. There's Omega, Experiment, Good Hope, Sparta, Cairo, Athens, Ideal, Kingston, and so many others. Last edition, we covered Hepzibah, GA.

This time, we turn our eyes to the southeast and down to the coast in Chatham Co., GA and the uniquely named town of Thunderbolt, GA. One of the coolest city names in the great state of Georgia, in my opinion, this town runs along the shore of the Wilmington river and is in very close proximity to Savannah and shrimping and fishing are among its biggest enterprises.

From the official city of Thunderbolt webpage, here is a bit of history:

"The Town of Thunderbolt, a small town who owes its name to a legend of a lightning strike that created a freshwater spring on the Wilmington bluff. Native Americans were found to be among the first inhabitants.
Thunderbolt was a settlement which evolved into a shipping point for local plantation needs which also serviced the river traffic. In 1856, the Town of Thunderbolt was incorporated as Warsaw and then began its history as a processing port for the fishing community. In 1890, Georgia State College was founded for the education of African Americans. This college continues to be a historically black institution and is known today as Savannah State University.
In 1921, Warsaw's name was restored to Thunderbolt and the seafood processing continued to play a large part in this community's development. In 1939, yacht racing became popular and saw the construction of a yacht basin. Annually, the "Blessing of the Fleet" was celebrated until recent years and shrimping evolved into the primary seafood product.
Today, the Town of Thunderbolt remains a unique community with a distinct personality all of its own. Families dwell in this town for many generations which becomes a part of our town's rich history.
This is the legacy of the Town of Thunderbolt!"
A cool little town with a very cool name and background; I've always wanted to visit it sometime, perhaps soon I will.
*And yes, I get that Chatham Co. isn't in the Georgia Piedmont. So what...