Another week in the books in Newton Co., and another Sunday Edition of The Piedmont Chronicles. So good to see you again; join us, join us...

~I'm starting to wonder if all elected GOP officials in Newton Co. have a thing for self-flagellation. First we have Keith Ellis, who, he, apparently being an Indian Giver, giving his rationale to the Covington News for removing Neuhierl from the Citizens' Committee on purchasing and vendors:


"When someone is critical of the Board of Commissioners...they should be respectful...and not make critical statements..."


Are you kidding me? What? And what did she say? That per state law any government vendor has to have his taxes paid? Or her saying what every sane and rational Newton Countian knows - Tommy Craig is the BOC's wet nurse, and those lil' guys don't want no one else but Mr. Tommy to be there for them? Incredible!

~John Douglas voted against raises for the NCSO and FDNC because, "everyone else deserves a pay raise." Everyone, Mr. Douglas? Even the no-accounts and lazies? He sounds more and more like a Democrat every day. Maybe he should switch parties...

~And not to be outdone, Levie Maddox's main concern at this point appears to be that Tommy Craig is being singled out.  I guess attending BOC meetings in not a concern since he wasn't at the last one.

~Landfill update? Not much to report other than it seems at least a few of the powers-that-be seem to be a little sore and put off that the Citizens flexed their muscles a bit and white and black folks came together to put the brakes on something that may have been a disaster for our home county and would have seriously lined the pockets of a select few. How...DARE THEY?!

~The Newton Co. Collaborative was announced this past week. A 19-member "super duper" committee of elected officials, business leaders, and activists. My main man Aaron Brooks, "local politician," is on there. Well hey, Aaron, it could have been worse, eh? Could have called you one of the following: 1. Community Activist (think Belton's last-second mailer); 2. Dookie-head; or, 3. Late for Supper...haha!


~The city of Covington, Newton Co., and the surrounding area has an unbelievable amount of Artists and they are all so amazingly talented. The Southern Hearland Art Guild and Gallery is the home-base of this esoteric and gifted group of artisans. And they've got a big event coming up Friday night: 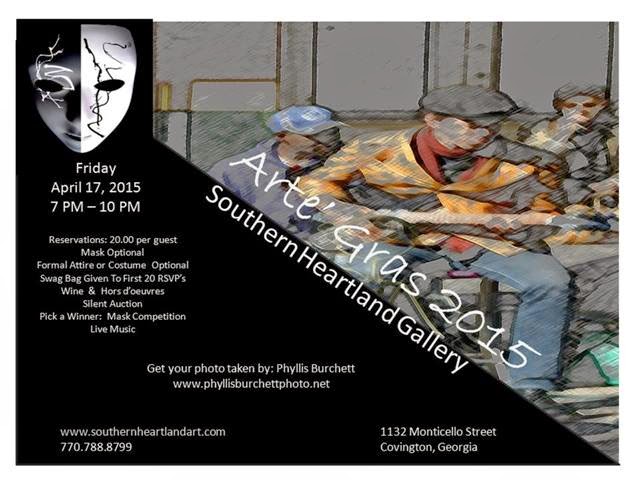 ~Two groups, Unleaded Angel and Wylde Flowers, are playing at Amici Covington this Friday. Music to start up at 7PM, this Friday, the 17th.

~A great webpage and resource for all things Southern and culture - Center For the Study of the American South. Lots of great stuff here.

~G-Day yesterday. Here's my write-up from my other blog, Go You Silver Britches. Things are looking good for our Dawgs, and I think that D is gonna be the truth, y'all! And who's the QB gonna be? I say let's get Southern Rock on it - TRIPLE QB ATTACK!!!

~And of course it's Masters Week. Man, that Jordan Spieth kid. Can he keep it up?


~Here's a few write-ups of some local places I did a while back.
-Hayston, GA
-Starsville, GA

~Today was the day that the War Between the States started and ended. From The Civil War Trust:

On April 12, 1865, the soldiers of the Army of Northern Virginia surrendered their weapons and flags to the Army of the Potomac at Appomattox, Virginia. The Union soldiers held their rifles in the "carry" position, indicating a "marching salute," as the Confederates passed by. This display of "honor answering honor" evoked great emotion in both armies.

Joshua Lawrence Chamberlain recalled details of the day:
"It was now the morning of the 12th of April. I had been ordered to have my lines formed for the ceremony at sunrise. It was a chill gray morning....We formed to face the last line of battle, and receive the last remnant of the arms and colors of that great army which ours had been created to confront...We were remnants also....
We could not look into those braved, bronzed faces, and those battered flags we had met on so many fields where glorious manhood lent a glory to the earth that bore it, and think of personal hate and mean revenge. Whoever had misled these men, we had not. We had led them back home....
Forgive us, therefore, if from stern and steadfast faces, eyes dimmed with tears gazed at each other across that pile of storied relics so dearly laid down, and brothers' hands were glad to reach across that rushing tide of memories which divided us, yet made us forever one."
Fort Sumter had been fired upon exactly four years before, on April 12, 1861.


Miscellany -a- What Not


~Passive-Aggressive Notes. Too funny!
~Winning! At everything!
~Who's ready for the Piedmont Chronicles Dance Party coming up soon!

That's a wrap, folks! Til next time.