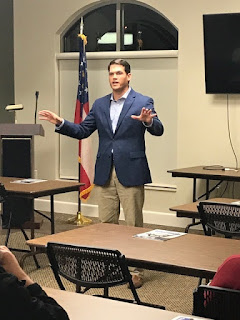 Duncan was the featured speaker for this event and gave a very good speech that was well received by several in attendance. One NCRP member that I spoke with after the meeting said, "I'm really impressed with Duncan...I think he'll be the one that I get behind."

Duncan's speech highlighted his conservative values while playing up his status as the presumed underdog & "true conservative" to odds-on favorite David Shafer, who spoke to the NCRP a few months back.

This writer was impressed, and as many have commented in the past - including a certain "local politician" - Duncan is easily the most handsome man running in any statewide race in the 2018 election cycle.

Visit its webpage to get more information about the NCRP.

Thanks for reading. Until we meet again.