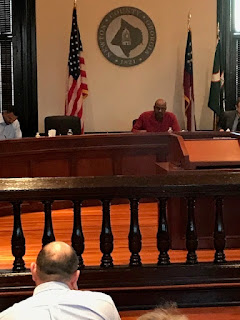 Chairman Phillip Wise opened w/ a statement saying that nobody wants a “trash mountain” & that anything allowed from out of the county would be looked at on a “case-by-case basis."Several citizens spoke out against this proposed change during the first round of Citizens' comments including Porterdale Mayor Arline Chapman who gave an impressive & impassioned speech that articulated the feeling of many in the room. Several others spoke as well.
The Authority approved a SWA Checking account but tabled expenditures for a new truck and compactor. 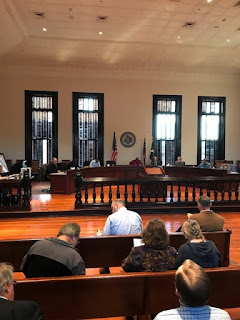 *Item 14 - Approval of Resolution to propose an amendment to bring in out-of-county trash to the Newton Co. Landfill on a case by case basis on outside trash. SWA wanting power to decide case by case.

Sims said he never wants to see it on the agenda again! He said if we don’t want outside trash we have to work together to find a financial solution. Shultz asking how much money Social Circle would bring into our county. SWA said It would increase our tonnage 10%. SWA wanting to increase our intake 10 or 20% to fix budget shortage. Shultz saying she wants to reduce trash mountain and not add to it. Banes wants SWA to come before the board in a work session.


The proposed amendment was tabled.

We'll keep an eye on it.

* A TPC Correspondent contributed to this report
Posted by MBM at 9:22 PM