A "quasi-judicial proceeding," as described by presiding officer Ronnie Cowan, 5th District Commissioner, was scheduled to occur yesterday at 3PM - it ended up starting a few minutes after 4PM - as an "appeal hearing" for the purported removal of Josh McKelvey & Steven Rhodes from the Newton County Recreation Commission (NCRC) by Newton Co. Board of Commissioners (BOC) Chairman Marcello Banes. 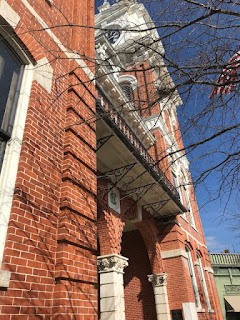 Let me be clear: this thing came off as an absolute joke. Though it was considered to be basically a judicial process, hearsay was, multiple times, allowed as admissible  testimony. Originally this was described by the county, as previously mentioned, as a "quasi-judicial" process; later, when things started going south for the county, it was stated that this "was not a judicial proceeding."

It seemed, as described by many in attendance, as a "kangaroo court," and really more of a circus sideshow, and it was painfully obvious to most in attendance that the Newton Co. BOC was just making it all up as they went. It was kind of embarrassing to watch. To that point, several Newton Co. Citizens are now openly wondering if there is any decision moving forward other than doing away with our current million dollar attorney. It has become apparent to some (and possibly supported by reading the Covington News article from last night) that Megan Martin is in some ways basically running the county "Tommy Craig style, " at least as it relates to many issues including the spectacle we all witnessed yesterday. If so, then what are we paying the County Manager for? Why would we even need a full-time Board Chairman if that's the case?


When originally planned, the county - who has seemingly been so paralyzed by fear of a lawsuit from the former Rec Department Director even though it is possible as if there is nothing to be worried about (over 600 pages received from ORRs  seems to support this)...and to think: the BOC voted to approve an appox. $400,000 settlement - perhaps thought that this would be rubber stamp for the Chairman's purported removal.

Things totally changed Monday night at the Covington City Council meeting. When the Council voted to provide support & legal counsel for its representative, Josh McKelvey, on the NCRC, things were completely different. While the regular Covington attorney is Frank Turner Jr., he was on injured reserve, so back-up attorney Bob Stansfield entered the fray on the city's behalf.

My quote on Facebook yesterday sums up the performance of Robert H. Stansfield, Esq.:


"Watching Robert (Bob) H Stansfield today was like watching a lion mauling an antelope on the Discovery channel."


After 3 hours, including 40 minutes of executive session, the Newton BOC decided to...do nothing. They said they were taking no action on McKelvey or Rhodes, but they would be looking at ways to change things to ensure something like this didn't happen again. Namely, possibly eventually dissolving the NCRC.

While it's disappointing how the county decided to "cop out," ultimately the important thing was this - Justice carried the day; two good men, one black & one white, were able to continue to serve their community; and the County's egregious violations were not allowed to stand. This was a win for the home county, and anybody who isn't racist, misguided or misinformed, or engaged in playing politics - totally gets and understands this.

Just another day in our lives as the world turns in home county, folks...

I will close with what Josh McKelvey posted on his political page last night:

"I want to take a moment to thank everyone for the calls, texts, emails, and prayers that were sent in support of myself and Mr. Steve Rhodes in our fight to remain on the Newton County Recreation Commission.

"I also want to thank everyone, especially my Wife, that donated 4 hours of their time to attend my "appeal" and show their support. It reminded me of the old NCLA days, when good people of Newton County from diverse political backgrounds came together to make a statement. I believe that was the most beautiful part about tonight.


I think that show of support from the public, the Covington City Council (Thank you Mayor Johnston, Susie Keck, Mike Whatley, Hawnethia Williams, Kenneth Morgan, and Anthony Henderson), and of course, the defense put up by City Attorneys Frank Turner and Bob Stansfield helped our case tremendously. I look forward to continued service on the Newton County Recreation Commission as the City of Covington's appointee.
I want to close with this:
I never wanted to bring about any distractions to the City, County, or our Citizens, but I felt that I needed to make a stand on this issue. I would like all of my supporters to know that Josh and the City of Covington didn't go looking for a fight, but we stood our ground when the time came. The Newton BOC isn't our enemy. They are our partners in helping Covington and Newton County continue to attract economic development and improve the quality of life for everyone here. As is with any large organization or business partnership, internal squabbles happen. Successful organizations settle those squabbles and move forward for the good of everyone involved. Please keep this in mind, as the City of Covington and Newton County look to move beyond this situation and find success by working together to move our community forward."

Thanks for reading. We'll talk with you soon.