Perrin Lovett - Know Your Enemy: On the Russia Fixation

One cannot turn on the electric lobotomy box or the Farcebook or even visit a mental hospital these days without getting a big, ranting, raving, slobbering, wild-eyed, crazy dose of the “Russia, Russia, Russia” hysteria. How many times have you heard something about it, just today? 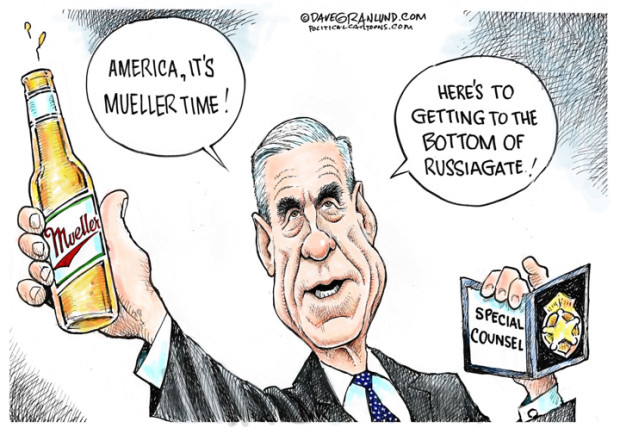 One really needs a drink to make sense of it… East Bay Times/Dave Granlund.

Rest easy, gentle readers! The purpose of this column is to explain away the real reasons why certain types are so ridiculously obsessed with Russia, Trump, more Russia, and a little more Russia for paranoia’s sake. And, by “certain types,” I mean globalists.

They’ve been buggered by Russia for a few decades now (as we’ll get to shortly). When not promoting degeneracy, fostering “refugee” invasion to destroy Western countries, looting every bit of value left in the economy, retarding education, starting wars, and hating Christians, it’s been a hobby for them. We’ll just say that Hillary kicked off the modern anti-Russia mania during the 2016 presidential election. You’ve likely heard something about collusion between Trump and Putin from the coddled media, from idiot pols at the Strzok hearing, and from some 85-IQ “celebrity” trash of the socials. Heard something, but seen nothing in the way of evidence…

By the way, yes, these are the same types who, 50 or 60 years ago, simply could not give enough praise about all the great reforms and enlightenment emanating from the (then) communist USSR. Remember that? Back when Russia really was a foe. Back when globalists in the US and the UK were actual Soviet agents. That was then.

Now, they delight in the recent indictment of 12 Russian intel officers, accused of terminally interfering with Hillary’s coronation. The globos were “with Her” and Viktor, Boris, and Co. ruined it by spearphishing some pizza emails. One can’t help but wonder, after reading the indictment, where Trump fit in the scheme. It’s like the Russians left him out or something. Odd. At any rate, good luck prosecuting that case.

If the mere allegation of collusion had them in fits, then the diplomatic meeting Monday in Helsinki sent them over the edge. According to their plan, at this point, we were either supposed to have extreme hostility with Russia or outright war. Instead, we had two adults sit down and begin to hash out peace and friendship. As an added insult, Trump correctly described his predecessors’ handling of the affair as foolishness. All this immediately on the heels of Trump basically telling the EU and NATO to go hang.

Drifting towards my three reasons why all this matters so to the left, the EU is pandering like never before on behalf of their masters. Ahead of the Helsinki summit, Jean-Claude Juncker lackey, Donald Tusk, practically begged Trump and Putin not to upset the New World Order applecart. Tusk, tusk, tusk … go hang.

The NWO is everything to them. The globalists (aka the socialists, the communists, the fascists, the Big Club, the Illuminati, the Satanists, etc.) literally want to rule the world. They’ve been trying to accomplish the coup for the past century. Now, as the whole thing threatens to completely fall apart, they are panicked, desperate, and dangerous.

There are three main reasons why hatred of Russia is so important to them:

First, they “lost” Russia. December 26, 1991, the day the Soviet Empire dissolved, is their 9/11 or Pearl Harbor. Much hope had they placed in the ways of Lenin and Trotsky. The ramifications of subtle changes made by Stalin were only realized too late. Then, in the blink of an eye, their idyllic model was gone. For a while, they went into mourning. Now they are vengeful, feeling betrayed by Russia’s leaders and by her citizens.

Second, the European Union is strained and fragmenting. The EU was one of two auxiliary control models. It was intended as a softer, friendly trap. Today the trap has sprung in reverse with rebellion in Britain, Italy, Germany, Austria, and almost the entirety of Eastern Europe. The thing probably only has another ten years of life left, if that.

Third, and more cogent for the American audience, is that the United States now slips from their hellish grasp. The US was always intended as the other backup; it was intended to become the USSA. And just when they were assured of getting their way ... BOOM! Trump. The revival of real patriotism. Truth through the fake news morass. The awakening of the People. Much to their chagrin, it seems many Americans actually like America.

As an aside: Chinese-style communism never suited our would-be overlords. Mao turned the idea of universal, homogenous slavery and control into a mere nationalistic dictatorship. Starving peasants in Shanxi didn’t really help cement anyone’s control in Toronto. The international banksters always had trouble stealing a buck in Beijing. The Chi-Coms stopped at a reasonable 300 operational nukes - good for defending a nation, bad for fomenting international hostilities.

There you have it: a triple punch has them reeling. The truly off-the-rocker commentary begins. Neocon globalist John Brennan, of the Bush (globalist) regime and the Obama (globalist) regime, madly ranted: “Donald Trump's press performance in Helsinki rises to and exceeds the threshold of 'high crimes and misdemeanors.’ It was nothing short of treasonous.” 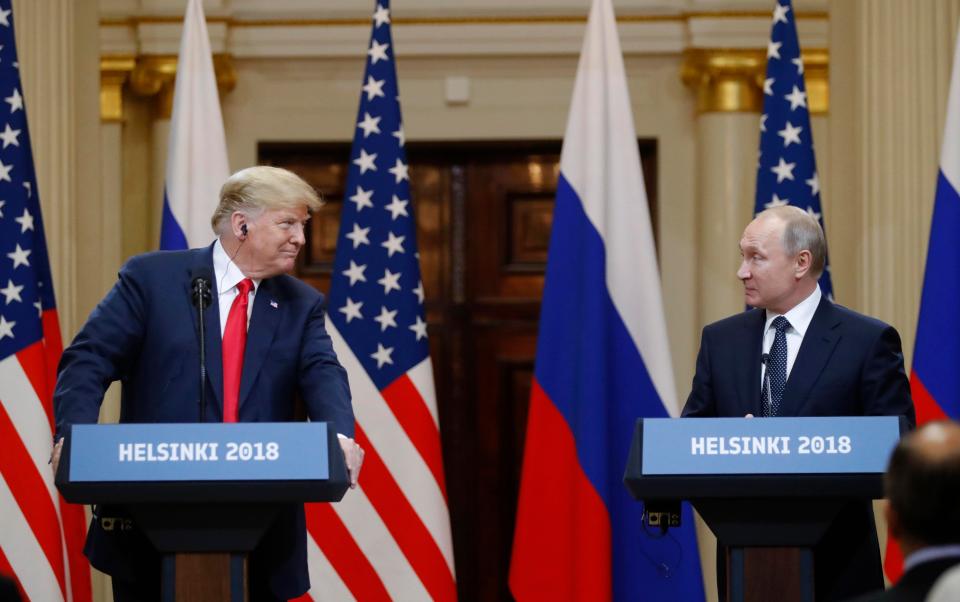 Caught in the act! The Sun/AP.

Ooooookay… Putting aside the striking notion that Brennan would look great in a straightjacket and would probably make a perfect resident at GITMO, there’s that thing about the threshold. Anyone care to point out where, in the USCA or any other body of law, holding a press conference is a crime?

And what of Trump’s performance? Said the President: “We made the first steps towards a brighter future, grounded on cooperation and peace. Refusing to engage will not accomplish anything. The disagreements between our two countries are well-known and president Putin and I discussed them at length today.” Better tell Maxine Waters to stop calling for street violence and start drafting those articles of impeachment. “It is hereby alleged that the President did, knowingly and willingly, call for peace and cooperation…”

There are and have been disagreements, major and minor, between the US and Russia. But, there are and have been many similarities, which are much more suggestive of natural kinship than of animosity. Therein lies the rub. The globalist monsters simply cannot stand the thought of peace and freedom, especially between two powerful and traditionally Western nations. That way signals prosperity and happiness for the many, with nothing left gnawable for the elitist few.

To such peace, they would prefer war - nuclear war even. Wars may come, they may be forced upon us or we may be forced into them. But the trend is beginning to look like they might just be wars to finish off the stranglehold of the vipers and thieves.

It’s important to know who the enemy is. It is not the Russians.

The Piedmont Chronicles
Posted by MBM at 10:43 AM