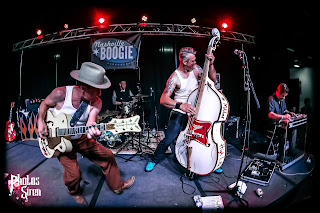 Hot Rod Walt and the Psycho DeVilles was formed in 2002. They have released 9 CDs.Hot Rod Walt takes pride in recording only original music and has over 200 original songs to his name.He also takes great pride in Endorsed by Gretsch Guitars and playing nothing but Gretsch guitars........ Nothing else compares.Hot Rod Walt shares the stage with two talented and loyal musicians......Burford T Ogletree on the Upright bass and Steve "Burnout" Barnett the hard hittin' punk rock drummer that never runs out of energy.Together the Psycho-DeVilles perform a super high energy show. Singing songs about hot rod cars and mean women.................In 2010 The Psycho-DeVilles had the pleasure of being a part of two TV shows. "Auction Kings" on Discovery Channel, where Hot Rod Walt auctioned off his Pink 1960 Cadillac.And "Cafe' Racer" on Discovery HDTheater/velocity, where they brought him a custom built Cafe Racer motorcycle to test ride and build a story on the band.In 2011 They sent HRW off to the famous Hawleywoods Barbershop for a story on the PompadourIn 2012 they made and featured a Music video of there song "Ton UP".In 2013 The Psycho-DeVilles were featured as the "Tennesee Three" in the Lifetime Movie "Ring of Fire" with Jewel and Matt Ross as Johnny Cash and June Carter.In 2016 The Psycho-DeVilles became endorsed by Miller High Life... the champagne of beers !!In 2017 The Hot Rod Walt and the Psycho-DeVilles are featured in Two episodes of a tv show called Caffeine and Octaine on Velocity Channel and NBC Sports.The Psycho-DeVilles have toured the U.S. and Europe extensively and have been privileged to meet many fine and generous people, and have shared the stage with some of the absolute best musicians. 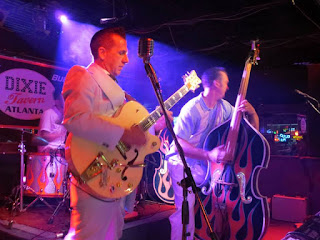