Perrin Lovett - Following Up on a Few Things: See, I Told Ya So


Here follow a few updates and confirmations regarding three issues previously explored in our ongoing examination of the affairs national. Remember, you read it here first.


On April 18, 2018, I covered a certain smarmy billionaire as he galavanted about with a murder of wizened criminals. Some said the Congress was about to straighten Facebook out. I called out the ruse:


A dirty little secret of the political world is that large corporations are absolutely, head over heels, in love with government regulation.


There’s now a little more evidence of just how pervasive FB’s spying on you really is. After you read that link, follow the instructions therein and see what they know about you; they probably already know you’re reading this… And fear grows that, just as I suggested, the big social media monsters do or can work with Big Brother to monitor and track who is who and who does what.


Via that last link, I couldn’t help but notice the Forbes writer’s slight obsession with homos being targeted. Allow me to expand the concern categories to include: Christians, whites, white Christians, all other Christians, HETEROsexuals, (real) conservatives, right-wingers, libertarians, free-thinkers, business owners, gun owners, traditionalists, homeschoolers, preppers, children, the elderly, the intelligent, independent farmers, the hard-working, the tax-paying, veterans, rural dwellers, Southerners, and … You.


Regardless, if you are a homeschooler, you should keep at it because:


Way back on May 23, 2018, came my rational assessment of public education in America. The assessment was simple: the schools suck.


In Georgia, they suck so bad that, in 2017, the Gold Dome Goon Gaggle gifted the people the
State School Turnaround Office. This new agency is more than an admission of failure. It’s also a makework program! (Peruse their website). Therein they state six focus features, which I herein address and [render to plain meaning]:


Prioritization for grants - [Gettin’ that graft on!]
Support from an Improvement Specialist - [Makework]Ga DOE Resources - [Wasting tax money]Support with securing and coordinating parent & community resource - [Wasting more money]Leadership development - [Wasting graft money on makework]Support in implementing a school-driven improvement plan - [This nebulous “plan” is the only point arguably related to improving education. Why is its implementation dead last on the list?]


Only a year old, the Office is already “helping” the failing schools of Richmond County. Well, not all of them. I think, the magnet schools and an IB program aside, all RC schools - by an honest metric - are failing or failed. (“All” means 33 elementary schools, 11 middle schools, 8 high schools, the 4 magnets, and 3 “special” schools). That’s a total of 59 schools in trouble, minus a few exceptions. But, the State will just help the ones on the select list of special failures. Oops. Not all of them either, it seems. For now, only six out of thirteen schools will be “helped.” Screw those other kids!


And, that last sad sentiment brings us to the most unpleasant segment for today:


Pushing the Pedos (CAUTION: this one is a little strong)


On June 14, 2018, I dropped the bomb about where all the tolerance, equality, and diversity BS is going … now. The current push of the degenerates is for the normalization of pedophilia. The globos are meeting stronger resistance on this front than perhaps they ever have (thanks be to God). The lettering is a little crowded as is but I hear they want to add a “P” to the LGBTQWTF acronym.


More proof comes from the disgusting life and times of one James Gunn, whom I had never heard of until I read Cerno’s story. Gunn seems to be a pathetic creep who was just fired as the director of some sort of Disney trash. *Note: Walt and Roy have been dead for some time now though it’s the company they founded that’s stinking as it decomposes.*


Gunn was fired after Mike Cernovich revealed an archive of (since deleted) Gunn Tweets. In those Tweets, the freak … uh … just read a few at the link or below. He says they were all but jokes - 10,000 filthy, disgusting, Satanic, sick, very detailed and very personal, very telling jokes about rape, raping children, and animals raping children. By the way, this is the type of “man” standing in for Walt these days.


“I like it when little boys touch me in my silly place. Shhh!”


“The Expendables was so manly I f-cked the sh-t out of the little p-ssy boy next to me! The boys ARE back in town!”


“I should have invited you – @cwotd was in your movie (Richard Christy). He said you had him castrate a little boy.”


“Watching Trapped in the Closet, R Kelly’s second best video after the one where he urinates on a child.”


That’s (more than) enough and not the worst of it. This is an example of the predatory lechery that is children’s entertainment in America, 2018. This is why I do not watch television, do not see movies, and do not give a penny to my enemies. You may be surprised, but not everyone shares in the revulsion about this garbage. Columnist Ben Shapiro, “conservative” darling and dark web ninja is aghast that Gunn ... was fired: “I also think that firing him for vile old joke tweets is bad precedent and a mistake. There is no limiting principle to the outrage mob.”


The actual mistake is allowing these people to continue to live in our country. 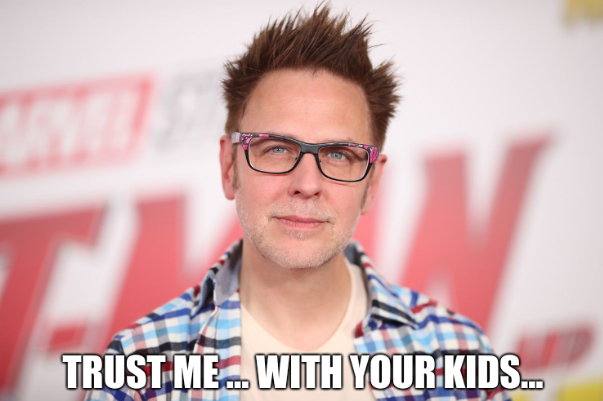 Picture (modified) from The Verge.


And that’s enough for now. I sometimes feel a twinge of jealousy, here. Other TPC columns recount the fun of family and festivals and the splendor of good company. MB keeps it real with really useful practical political info for your home county while keeping the beat with the music. Then, old Uncle Perrin emerges like a shadow of doom from the dark forest… Ah, well, it’s my job; there are wolves in the forest, wolves with plans you need to know about.

PS: I notice there’s increasing fervor about the coming election this year. You can bet I’ll probably weigh in before the leaves turn. Whatever opinion I express, then, will likely need one of those “the views expressed herein do not necessarily…” thingies. We shall see. Oh, on a completely unrelated note, I hear Lowes has a sale on rope.

The Piedmont Chronicles
Posted by MBM at 6:26 PM