Past Piedmont Chronicles: The History of Hayston

* originally appeared in About Covington to Madison magazine in 2011

Greetings! Hope all is well out there. I really appreciate all of the comments and feedback on the Oxford &Porterdale columns from the last edition. I've lately become fascinated with some of the older unincorporated towns and communities that have been vital to this area. This month I'd like to write about one of the oldest settlements in Newton Co— Hayston , GA.

In the first part of the 19th century, a young man from Virginia named GeorgeNewton Hayes (he would later drop the “e”) would migrate to Georgia eventually winding up in our neck of the woods. The Hays Cabin over on Woodlawn Rd , built in the early 1800's, was his homeplace and is one of Newton County 's oldest surviving structures. George Hays would e 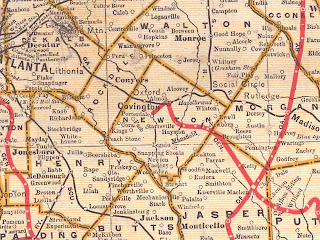 By the late 1800's, Hayston was a thriving place with multiple stores and businesses, a brickyard, train depot, tannery, gin, and a sawmill. Whereas Mansfield, as we discussed in a previous column, was a town created by completion of the railroad, Hayston was the complete opposite--when the C of G (Central of Georgia) bought theMiddle Georgia & Atlantic Railway, it was brought through Hayston precisely because it was already an established town and was right in between Covington and Machen (an important hub as it served as the intersection of the Athens/Macon and Covington/Eatonton lines) and would serve as an ideal spot for a terminal and post office. Back in the days of mules, wagons, and horses, there was a genuine need to have as many things needed as close as possible. Going back a bit—one of the stores in Hayston was built by one of Robert's sons, Alexander Hamilton Stephens Hays. Alexander would be the first postmaster in Hayston and operated the general merchandise store for years until he turned it over to his son, H.S. “Stoney” Hays. Stoney became the city's 2nd Postmaster in 1936 and would serve in that capacity for over 20 years until they discontinued mail service there. Another of Robert Luther's children was a daughter named Mary Jane. In 1861 she married a Preacher by the name of Thomas Hezekiah Greer who was originally from South Carolina . This would start the Greer branch of the Hays line. Some of the Hays clan found their way to Texas where a good number of them still reside, but a good bit of them can still be found in and around the Hayston area. As an interesting aside, I found a McCart girl who married one of the Hays men back in the mid 1800's.

Like a lot of the other places we've covered in this column, the one-two punch of the Boll Weevil and The Great Depression was very tough for Hayston. Predominantly an agrarian community, Hayston was particularly vulnerable to the fortunes of “King Cotton.” The economic struggles of the 1930's also did no favors for the area. Over the next several decades, many of the historic buildings were lost to fire or Mother Nature (tornadoes in particular); however, several buildings dating back to the 19thcentury still remain. One of those buildings, the aforementioned store built by Alexander Hays, has recently found its way back into the family fold. Mr. Freddie is very excited about getting the building cleaned up and refurbished. There are also plans to start the arduous but rewarding process of getting Hayston added to the National Register of Historic Places.