[Perrin Lovett] - One of Many: The Free War Against the Dirty Press

The mass, mainstream, slanted, biased, dishonest, yellow, establishment, corporate media has become the American equivalent and embodiment of Grima Wormtongue - slithering, slinking, whispering, and lying - ever misleading the just and the honest for the benefit of other masters. Some, tiring of the deception, bluntly call it what it is: fake news. This doesn’t sit well with Fake News, Inc. To wit:


Marjorie Pritchard, of the Boston Globe, made an impassioned call for editorials “denouncing what the newspaper called a ‘dirty war against the free press.’” And I, as your C.F. Floyd Feature Writer of National Affairs, hereby answer the call!


Estimates indicate that around 100 newspapers, large and small, will respond this week. Reckon TPC as number 101, kind of. Alas that I cannot denounce a war, dirty or otherwise, against the free press as such simply does not exist. Rather, consider this my part in the free war against the dirty press.


This all started with a Tweet from the President back in February. (Actually, it started years ago with the corruption of the mainstream media, but let’s not get ahead of ourselves). Tweeted Donald J. Trump: “The FAKE NEWS media (failing @nytimes, @NBCNews, @ABC, @CBS, @CNN) is not my enemy, it is the enemy of the American People!”

Trump is the base master of a little thing called rhetoric. Offended members of the media might do well to read Aristotle’s Treatise thereon though it seems rather unnecessary in this particular instance. Trump recently “clarified” what he meant by the statement, though the clarification also seems unnecessary. What, precisely, is ambiguous about the above-quoted statement? Nothing.


It’s not the free press. It’s not the press in general. It’s the FAKE NEWS press. Again, how does one denounce something that hasn’t happened? Trump never attacked the entirety of the media, just the part at war with truth and freedom, at war with the free people of America. In other words, he was just telling the truth.


I’ll note that much of the traditional media still does an excellent job reporting facts and occurrences. For instance, only two weeks ago I praised The Globe’s Jana Winter for breaking the Quiet Skies story. Then, I wrote, “Kudos, Ms. Winter,” and I really meant it.


Unfortunately, good journalism like that does not negate the dark side of the mass media. Perhaps you’ve noticed it over the years. They seem to operate by some sort of weird 90% formula:


90% of their outlets are owned by a tiny handful of corporate entities. 90% of them vote Democrat in every election. 90% of their coverage of the Trump administration has been negative. 90% of them are in therapy about Vladimir Putin hiding under the bed or in the Diebold machine. 90% percent of them support people like Sarah Jeong and James Gunn.


As a related aside, it’s funny that they got their ink blotters riled up about Trump’s Tweet while defending Tweets by Gunn (just jokes!) and Jeong (just turnabout!). They made Jeong an editor at the New York Times and they want Gunn rehired at Disney (or they did until THOSE pictures surfaced).


I’m not trying to be mean. Let me give a little due credit. Pritchard is right when she says, ‘We are not the enemy of the people.” They are not THE enemy. They are merely one of many. But they are a powerful enemy. After the politicians and the central bankers, the centralized mainstream media has probably done more damage to this nation than any other group. (I’ll admit the professoriate, the lawyers, the bureaucrats, and the mega-corporations give them a run for the money. Come to think of it, all these groups, together, kind of look like a cabal. Like a swamp….).


Back to the war: This week they claim their words will differ. Something tells me they won’t or, if they do, the overall message will be manifestly uniform. It’ll go something like this: Trump bad! Russia! We good wuttle journalists under attack. The First Amendment!!! We’re the good guys. Trust us...


*A note here: your author is not necessarily “in the loop” with these folks; this column is probably the only substantial departure from the narrative nationwide.*


On the Constitutional front, Pritchard concluded: “...an attack on the First Amendment is unacceptable. We are a free and independent press, it is one of the most sacred principles enshrined in the Constitution.’’ Noble. So noble. In just keeping with the media’s famed and unending defense of the Second Amendment…


The free press is actually protected under the First Amendment - from Congress making abridging laws. I swore Trump was elected to the Second Branch… Has Congress-of-One Trump made some abridging law of which I am unaware? No. He just made some stingingly accurate Tweets. Other presidents have done far worse. Honest Abe imprisoned members of the press. Maybe a Tweet or two ain’t so bad.


And, if the fake news media does legitimately feel their First Amendment protections threatened, then allow me to offer some kind reassurances (which should sound vaguely familiar): 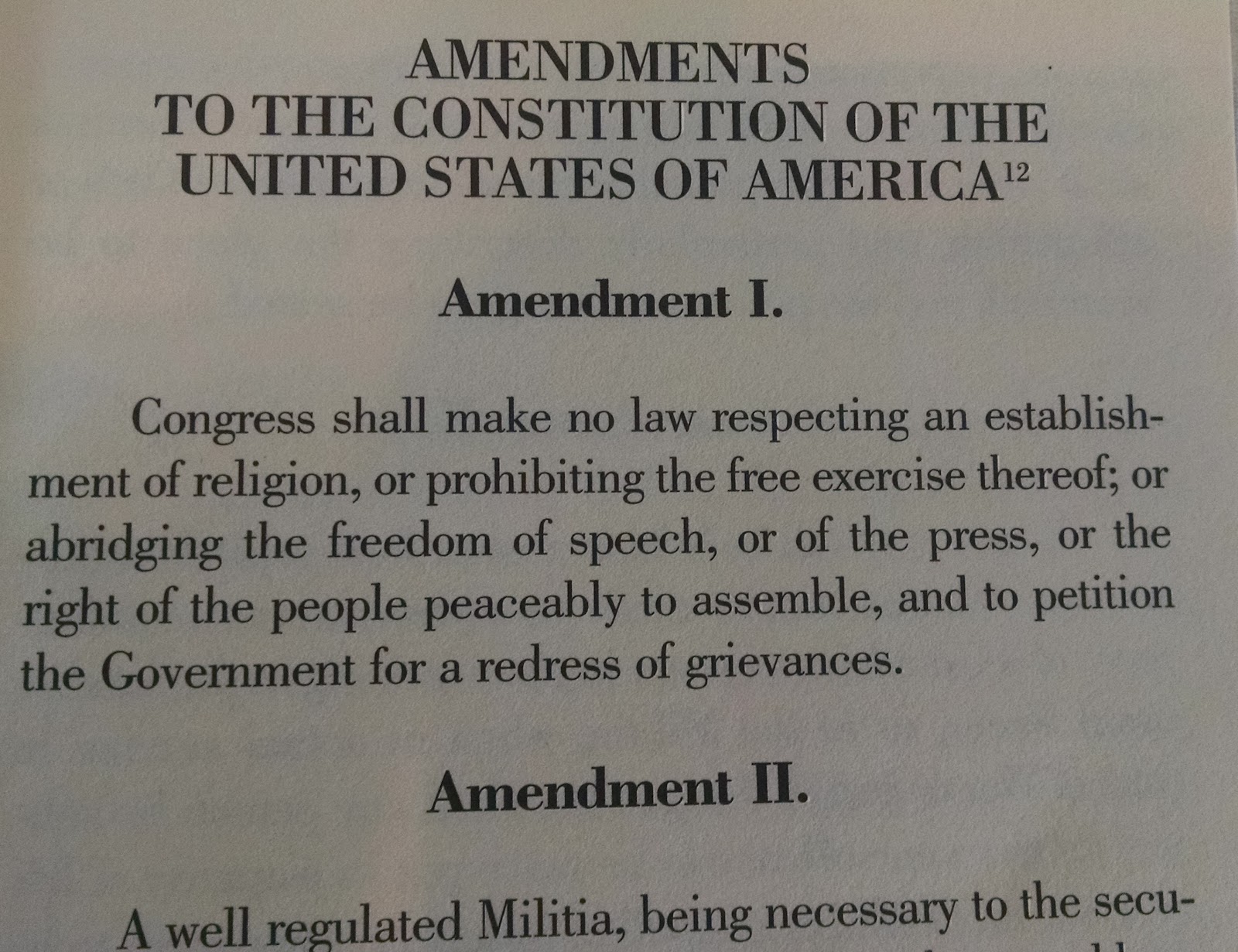 See, I and II literally go together. Picture by Perrin.


This week’s concerted effort does prove something to the American people. It demonstrates that not only is the press the enemy, the press is the coordinated enemy. But people are catching on. Fake news is no bueno! Lies and scare tactics about Trump, the First Amendment, and the dirty war are just more fake news.

PS: This author is in the midst of a Facebook drawdown. As such I may miss comments left there about the C.F.F. columns. So start adding comments right here at TPC.
Posted by MBM at 1:54 PM