Things are heating up in the District of Corruption. My offbeat guest last week offered some interesting insight into life and times in the Swamp - along with a glimpse inside the mind of a schizophrenic. One thing really stood out as a panicked admission: “The deep state is in trouble.” Yeah. More than she, you, or they believe.
Unless you’ve been under a television soaking up the NCAA/NFL opiates, you know that the Senate is currently in the process of vetting Supreme Court nominee Brett Kavanaugh. Kavanaugh will be confirmed here shortly. And he will be (should be) as good a Justice as one could expect at such a late hour.
These confirmation hearings are always colorful. But this one has had more than its share of fireworks. You’ll recall the other week when some pill-popping cyber sloth sleuth REEEEEEEE-ed away upon discovering that Kavanaugh’s former law clerk, Zina Bash, was throwing white power hand signs around the hearing room. This was very volatile fuel for the Trump-racism crowd. It’s well known that women like Bash are the KKK’s special forces; white supremacists only deploy the attractive Jewish Hispanic agents in dire emergencies… 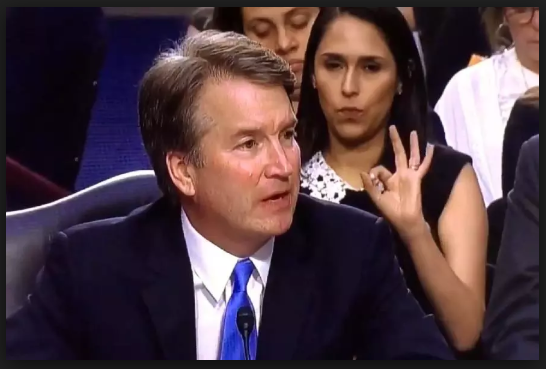 Hit ‘em, Girl! I hear she goes by “Alice Baker” on the street. Pic by Newsweek.
Then, the other day, and right on schedule, right out of the playbook, Senator Dianne Feinstein (Communist - KAL) rolled out a hoax implicating Clarence Thomas Judge Kavanaugh in a sexual assault case that never happened. Kavanaugh for his part denied the allegations emphatically. Feinstein for her part has yet to deny being a vampire. It was telling that the supposed episode - which no one ever heard of (because it never happened) - happened some 35 years ago. It involved a (then) 15-year-old girl whose identity Feinstein choose to keep a secret, though Feinstein did say she had referred the fake narrative to the FBI. At the time I assumed the anonymity had something to do with the woman not existing. I was wrong.
It turns out that 2018 is a little different than 1991 - make a wild allegation now and, anonymous or not, it gets the treatment. With reporters asking questions all over, the teen “victim,” now a 50-something liberal Kalifornia university professor, registered Democrat, and avowed resistance fighter spoke up. But not so clearly. Her name is Christine Blasey Ford and her parents were once party to a Maryland foreclosure overseen by Kavanaugh’s mother. She has no motive for revenge or fabrication whatsoever.
And she hasn’t fabricated much anyway. The details of the fake affair seem to elude her. At one point she questioned whether it even happened. (I think we can safely answer that one with a confident “No”). Kavanaugh denied it. The other man allegedly present denied it. Other general vicinity witnesses allegedly present either denied it or have no idea what Ford is talking about. Sixty-five women who knew Kavanaugh way back when vouched for his character. Ford herself said she didn’t really want to talk about it either until Feinstein came trolling and, even then, that she was content to remain anonymous.
This week, however, she had a change of heart. Now someone said she wants to testify before the Senate Committee, just as soon as she gets the story straight. A hearing was supposed to occur next Monday: He Said vs. She Said. Or it was… Word came Tuesday that nothing was scheduled and that Ford certainly was not yet a formal part of the show. This vacillation, strange as it might seem, was part of someone’s plan - a plan that is completely falling apart, swirling away like swamp water through an irrigation pump.
An offer was made, and probably by someone smarter than Feinstein, to drop the entire Ford attack-that-never-happened hoax in exchange for Trump NOT declassifying the Russia, Russia, Russia hoax-that-never-happened probe. Trump refused and has ordered reams of information made public.
This is a game-changer that makes the Ford-Kavanaugh fuzzy details thing utterly irrelevant. Suddenly, people with names like Ohr, Comey, McCabe, Strzok, and Page are in serious trouble. The cause for concern could easily spread to names like Clinton, Hussein, Biden, Schumer, Mueller, and Feinstein. !Popcorn! And, suddenly, the same Democrats who wanted a transparent FBI investigation into an anonymous, detail-free load of ancient lies do not want any transparency in an existing FBI debacle. (Seriously, flag the popcorn guy down). We may hear something about all of this in Trump's Thursday text to the Nation.
The troubles are real. The panic is real. Deep Staters are scrambling from the light like Post Malone sweating an Illuminati “curse.” It’s about damned time.

8Chan/patriotsfight.
Note: A very few of you may recall a few weeks back the news (reported in no mainstream source) of “Big Bird,” Snow White,” and the Bude Installation. (If not, don’t worry). I was able to independently verify much of the story. Something happened. I think I know what and why. One of those sources told me about Malone, whom I had never heard of before. Thanks (in this case) to the MSM, I now have verification of that celebrity matter. I have no doubts about the DECLAS offer and ensuing terror.
Now, I certainly hope you did enjoy last week’s guest bit. With what we’re learning, I am a little worried about my nameless but totally real secret source. I’m also a little saddened about the touted review of Hamrick’s Can-opener Emporium and Salsa Boogie Bar which now simply cannot happen. It’s not my fault for losing Kayla in the cornfield. I’m sure she was (is?) okay. And I had NOTHING to do with the fire. Insurance, right?
Please leave your responses, comments, “right on’s!” and so forth below in the handy comments section. Until next week, dear readers.