Friends, sometimes the topics come easy. This weekend, as usual, I pondered over a few subjects. We have the funny money and the ticking debt bomb. There are the increasingly believable and patriotic-looking “Q” men and the hope they bring to the downtrodden. (“Soon” indeed). There’s The Fall of Gondolin. So many affairs national.
Then, as sometimes happens, I read a simple story: in The Hill by Megan Keller: ‘Drag Queen Story Hour’ sparks protests in rural, Southern towns. The Chronicles being based in one of those Southern towns, I figured we could have our own protest. I’ll lead.
The concept is as simple as it is insidious:
“Drag Queen Story Hour,” a program in which [mentally deranged] men in drag read children’s books to kids in libraries or bookstores, is reportedly seeing opposition in some rural, Southern towns.
One might expect such a spectacle in locales like San Francisco or maybe somewhere on the Cape of Massachusetts. It surely started there. Then it spread rapidly to places like Lafayette, LA, Mobile, AL, and Columbus, GA. Columbus is, I’ll remind you, a short drive from the home office.
At least one public official has resigned over the scandal, which is associated with hairy, high-heeled freaks taking advantage of small children. A wing of the Tea Party has mobilized to action in Mobile. People who wouldn’t otherwise demonstrate are demonstrating. Some are telling the plain and honest truth about the matter:
“The program is designed to purposely target children so as to make sexual perversion acceptable through repeated exposure,” according to a poster on [a] group's Facebook page…
The “queens” arrive at libraries armed with books like Rainbow Fish - emphasis on the rainbow. They indoctrinate the impressionable young minds on the ways and deep meaning of Heather Has Two Mommies, Stella Brings the Family, and Daddy’s Roommate.
Those titles and others serve several purposes. A few almost come off as innocent children’s literature. Think “Tommy’s Tooth” … with an agenda. They also emphasize the message that some children live in and cope with otherkin family structures. Some children do. For those specific children, the books can (could) help foster an understanding of what normal is supposed to be like, that it’s not their fault if things are otherwise. Yet the primary purpose of these works is to keep pushing the agenda, railroading over affected youngsters while pulling all others into the madness.
That Facebook group called this reading movement exactly what it is. (One wonders how long their post was allowed to stand by Zuck’s SJW trust brigade.) Can anyone offer a better yet still honest explanation?
Honest or otherwise, probably otherwise, there are defenders of the program. Per Ms. Keller’s excellent article, these types point to the First Amendment. Why, then, does this affair make a more traditional mind consider the Second?!
The degenerates are serious about carrying on the mission. They’re serious about pushing the agenda. We’re told that protests aside, the trend is growing nationwide. It’s spreading fast - kind of like lymphoma. 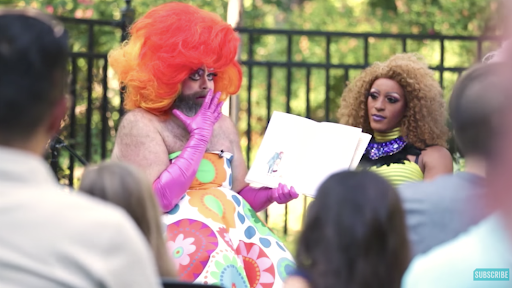 This is real. The Hill/YouTube: Today’s Parent. (Apologies if you were eating).
So many (most?) modern Americans must be accepting of the trend. Tolerant of it. Much can be gleaned from the thoughts of an article’s readers - good and bad - about the sense and sensibilities of the public. A prominent thread among the 1,600+ comments following The Hill’s piece (with C.F.F. retort):
“Tony” bravely, wisely admonishes: “Don't like it, don't go. This stuff isn't difficult.” No, it’s not.
A “Brown_Skin_Girl” added: “Good point Tony. That is what I would do and let those who don't care do what they want.” Do what thou wilt shall be the whole of the law...The rhetorically-challenged “Ozymandias” piled on:  “Its [SIC] just way too funny. The snoflakes [SIC] that are likely against it would never bother to show up and read books to kids.” Coy, boy.
Reveling in the collective brilliance, “kingdietrich” rejoined: “they wouldn't bother reading books to themselves either.” Dunning Kruger and projection are real, King Gamma.The last one I could stand reading was another “rah-rah” from “Ozymandias”: “Anything other than playboy [SIC] or its equivalent. Though they likely just buy them for the photos.” The deplorables just like dirty nuddy pics… The smut is real at Playboy though at least it’s aimed at red-blooded hetero adults.
I’ll bet there were plenty of comments from ordinary, sane people; I just lacked the time and the fortitude to get to them. But, do you, gentle readers, not see a pattern here? It is as I wrote back in June:
As a dark aside on the culture front, the current satanic push is for the normalization of pedophilia. I’ll bet you didn’t know that. Yet, I bet you suspected as much, whether or not you’ll kindly admit it. There’s a reason why some promote sexual assault in children’s movies. There’s a reason why they extol child drag queens. There’s a reason why the corrupt and useless British government is desperate to cover up the grooming rings. There’s a reason why thousands of low-to-mid level operators worldwide have been arrested the past decade for child sex trafficking.
There’s a reason why they want adult drag queens reading to children: it sets up some approximation of normality in the minds of our children that bearded weirdos in dresses are good, or at least harmless. Today it’s fun and we need to tolerate it. Tomorrow it will be glorified.
Nothing about any of this (unenlightened “snoflake” protests aside) is normal. It is not harmless. There is no glory in or of it. If only we had a storybook of our own to illustrate the ridiculousness and the demented nature of this cancer. Daddy’s Twinky Roommate Reads the Fish at Heather’s Family’s Library????
*A note: This subject is not unrelated to the debased scandal in the RCC. Last week I saw a telling comment in a story about that subject. It started with a hideous defense of the current agenda item and ended with an alarming hint about the next one. In summary, it said they should molest until they can cook! In a stupor, I failed to screenshot it and alas, when I checked again, it was deleted. Some tracks even they still wish to cover. For now.
**As always, remember that your humble author no longer supports Mark Zuckerberg’s Telescreen. As such, kindly leave your cogent comments here, just below.