Ellis Millsaps - The View From Porterdale: Let It Bleed V

The View From Porterdale 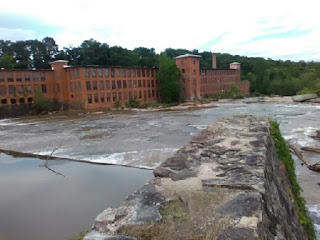 I see now one of the dumbest products ever invented and advertised on television.  I don't recall what it costs-- most likely 19.95-- but it's a miracle solution for a non-existent problem.

An attractive woman appears saying how nice it is to have a glass of wine when she gets home. It's that first glass that's the best she says and” wine just doesn't taste as good the day after it's opened, What if you didn't have to open it at all?”

Then she demonstrates a device which consists of a hollow needle being plunged through the cork. She then pours the wine at what must be a slow trickle, removes the needle and voila! the cork reseals.

This is wrong for many reasons. Oxidation-- exposure to air--  is what turns a tanic, sour, fermented juice into something drinkable, in some cases delightful.  Traditionally wines were stoppered with real cork which allowed for slow oxidation and Improvement of flavor over years, sometimes many as with the great Bordeauxs and Burgundies.

Californians have greatly changed this process, oxidizing wines in large swirling vats, greatly expediting the process. I'll end this Winemaking 101 introductory lecture by saying it’s going to make  negligible difference in the taste of most wines if one leaves the bottle unopened overnight. Unless your wine is way past its prime and on the verge of turning to vinegar, it's taste will only slightly be changed, probably improved, buy aeration. I'm reminded of the scene in “The Jerk” in which a wine steward presents a nouveau-riche Steve Martin with a legendary Burgundy. “1963,” he says, “ take this back and bring us some fresh wine.”

And even if that were not the case you could save your twenty bucks and shipping by just putting the damn cork back in the bottle. Just turn the cork upside down from the way it came out and press with the heel of your hand.

Equally bad idea with potentially far worse consequences: Turo. “ Turo is better than renting [ [a car]  from a rental company, because with Turo you're renting from a real person.”

No it isn't. Somebody decided that since Airbnb worked so well with houses, let's do the same thing with cars. They didn't think it through very well.

Let's talk some baseball. We used to be told to” square around’  to bunt, i.e. turn 90° and face the pitcher with the bat held horizontally at chest level. Now batters, usually pitchers, just stick the bat out over the plate.

I suspect the reason for this is an unwillingness to expose that much more of one's body to a 95 mph fastball. There are no pads over one’s front; they're on the arms and shins,the side  and back of the head.

When hitters squared around to bunt in the old days they had much better bat control. Many more bunted for hits.  In the sixties Maury Wills bunted for doubles. He’d lay down a perfect one, beat It out, and then steal second.

New rule, and one that should be enacted tomorrow. Every time a batter adjusts his batting gloves between pitches he must give $100 to the local homeless shelter.


Finally:return of the cranky English major. Remember a few months back when I was ranting about the recent trend of people pointlessly inserting “actually” in responses to questions? I recently read a review of “Dreyer's English and Utterly Correct Guide to Clarity and Style”, by Benjamin Dreyer, longtime copy chief at Random House. It's being compared to “Elements of Style.”  As to when one should use the word actually, Dreyer says never.