A Moment from MB: Folks Turning Left; The War on Traffic Signs; The Chairman in the Bubble

Greetings, GA Piedmonteers, & we sure hope it's fantabulous out there.

I've made it clear a few times over the years that I'd love nothing more than to have the ability to physically accost those dregs that pull into that left-turn lane there at Floyd & 278.

Also, I'm unfortunately able to report that upwards of a full half of these hapless bastards have Newton Co. tags.

But, my friends, it's not just there, is it? Turning left, generally, in the home city, has become a bit of a scourge.

Turning left out of the McDonald's on 278? You better believe it! And almost always these people get over just enough to the right where us good, God fearing folk can't make that right turn. These people...I swear.

Even worse? Some people actually try to turn left heading eastbound out of the Dairy Queen.

But, that's nothing compared to the absolute worst - those awful abominations that try to turn left onto 81 out of the Quick Trip parking lot that TPC Editor Emeritus Ellis "Da" Millsaps wrote about some 15 years ago at a certain other publication here in town.

Who are these people & why are they here?


The War on Traffic Signs

In the home city, really for years now, there's seemingly been a full-on attack on traffic signs up & down Hwy 278. The sign at the front of the median (heading east to west) there in front of Newton Package & Jack's BBQ has been taken out at least 4 or 5 times (probably more like 6-8) over the last several years.

Just awhile back, the GDOT, once again, replaced it (see below). Of course they did.

I give this one a couple of months, tops.

But it's not just that one. The one in front of Dollar General has been taken out at least twice over the last couple of years (I'd bet money more); the one down the road in front of the Pure station has too, multiple times.

I wonder if it may have something to do w/ the obvious design flaws? 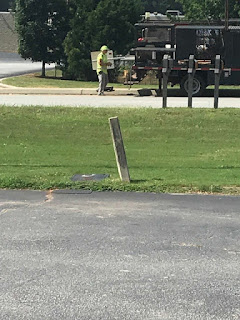 The Chairman in the Bubble

From a few months ago, but still...