It's two pm and I haven't heard an ambulance go by today. Lately I've been hearing a half dozen per day. Two years ago I heard maybe two per week. I've done all I can do about this phenomenon. The ball's in your court now, unvaccinated.

My daughter Grace and her family are up from New Orleans where power is currently estimated to be out for seven to ten days. Serendipitously my son Jack and his wife Olga have bought a second house with the intention of renting out the old one, but for now they have an extra house for Grace and Ryan and I get to spend  time with my lovely five year old granddaughter Talulah.. She and Jack's four year old Henry will be spending tomorrow in Porterdale. 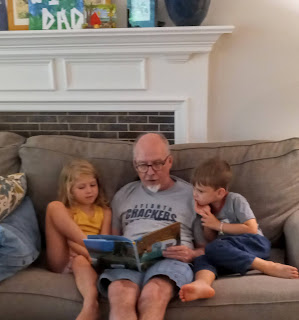 I know you're almost as anxious to hear about my grandchildren as you are to learn what books I've been reading lately. Sorry, you're going to have to wait for that. Today I'm going to dwell on my reading habits generally.

I've been  a voracious reader all my adult life--until Covid came. After that I read nothing longer than a TPC piece until the past six weeks when I have read several thousand pages of weighty tomes.

Since my early twenties the bulk of my reading has been what's called “literary fiction,” (Remember, I'm an English major.) but I also read works of history, science and philosophy and I’ve read everything by Raymond Chandler and Dashiell Hammett. I read British mystery writers P.D. James and Elizabeth George. ( George is technically an American but she writes British.)  I don't read John Grisham anymore; I just wait for the movie, but I read anything by Scott Turow, a much better writer.

Give me anybody's list of a hundred books ever educated American  “ought” to have read and I've read the majority of them. What books do I like most? I've read many hundreds of them but only a select few more than once.

I’ve probably read The Great Gatsby six times. I've read To Kill a Mockingbird four times. (I know book titles should be italicized but I don’t know how to do that.) Books I've read twice include Light in August, Huckleberry Finn, Ken Kesey’s Sometimes a Great Notion, Raintree County (The Elizabeth Taylor movie is an awful adaptation.), All the King's Men, A Catcher in the Rye, and Walker Percy's The Last Gentleman and it’s sequel The Second Coming. All of the preceding I would consider a contender for the Great American Novel. Others I've read twice couldn't contend for that prize because they're not American: the King James Bible, Albert Camus’ The Plague and I'm finishing my second reading of Thomas Mann's The Magic Mountain.

Next time I'll give you some reviews of what I've read lately. I know you’re on the edge of your seats.