[Nature Watching With The Alibug] - On the Road Edition: The Altamaha

When I get home from a trip, I get so caught up in birds at home, that I fail to share more of the trip! But these are Black-bellied Whistling Ducks. When I first became aware of these ducks, I asked, "do they really whistle"??.. The answer is yes! There were rather large flocks of them in the Altamaha WMA! On this day, they blended in nicely with that hot, ochre-colored mud and the same colored muddy water. They are typically found year round in Florida, but only along the E Coast of Georgia and about halfway up the coast of South Carolina!


Darien, GA is OLD!! It was established as a port on the Altamaha River by Scottish Highlanders in 1736! There are numerous things to see and do in and around Darien. (and a number of REALLY good places to EAT!! 😁) Ft. King George is one of the oldest places...There's a story about me and an alligator my friends will never let me forget that happened at Ft. King George. 😆 One of my favorite places is Two-way Fish Camp and Mudcat Charlie's restaurant, which are in the same place. The restaurant is 'decent'...not as good as in previous years,...but definitely not bad. And when it's hot on that dock, the restaurant is a good place to get an ice-cold sweet tea....or something just a tad stronger!! The fun thing is wandering around on the huge dock where fishermen, private and chartered, have come back in to clean their catch! It's fun to see what they came up with, but the real fun is watching what ELSE comes!! The minute the water from the cleaning hose starts hitting the river, the gators are alerted. Because that sound means DINNER! This time two BIG gators started heading toward the place the fish heads and entrails would fall. And then, there was another little surprise I have never seen! A little Snowy Egret has obviously discovered 'lunch' too!! 😯


- LOCAL ADVERTISER -
* Local advertisers do not necessarily support or endorse opinions of TPC or its Ed, MB McCart*

I saw some interesting birds at the Altamaha WMA this past weekend. I have only personally seen this bird in Arizona! And even though they can be found occasionally in the Carolinas, and along the Gulf Coast, I don't think they are that common in Georgia! It's a very LONG-legged bird!!
~Black-necked Stilt~ 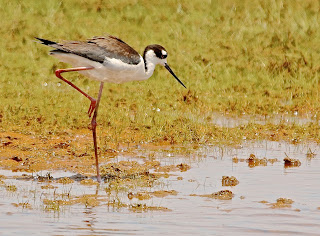