Jerry Jeff Walker is Dead & I Ain't Feelin' Too Good Myself

You see, it's my Daughter's Birthday Week, & we'd planned a get-together/grill out & I had some outstanding items to do on the ole Honey Do list.

I was up before 6am

It was Jeff Hullinger's post - the first one on my news feed when I checked it this AM - that broke the news to me, and I'm glad it was. The post that'd told me one of the heroes of this country had gone home to Glory - that Jerry Jeff Walker had passed on.

Jeff Hullinger is a dang American - and most certainly a Georgian - Treasure. Growing up w/ him on the news is definitely a factor for me saying that, but, again, I 'm glad it was him...

For the record, Homeslice gave props to Ron Kimble a while back when Ron passed away. He was familiar w/ Hemmingway's back in the day.

The fella's tied in, folks.

And if not for his post, I would've never known about the Glanville/Atlanta Falcons tie-in. I knew about the UGA Basketball & the UGA Alumni Association connection back in the day, but never knew anything about that.

Folks, it's as if JJW was some kind of Forrest Gump-type character (minus the mental retardation & all).

My Dad introduced me to Ronald Crosby, AKA, Jerry Jeff Walker when I was twelve.

Who plans a trip like that? Yeah, my Dad...he's something.

When we'd been on the road for a few hours my Dad pulled out a cassette tape & pushed it into the tape player of the '86 Ford Bronco we were riding in.

"Boys, check this out. This is the fella we've been telling you about that we've seen live a few times..."

As I found out a few years later, they'd seen him in Athens, GA a few times, as well as Vail, CO, & apparently a few points in between. 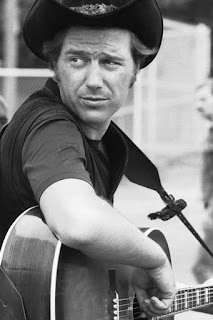 It's almost like a secret society, the folks that have this thing for Ronald Crosby (Jerry Jeff Walker). Or, maybe a club of sorts.

Seeing the man live was always a true treat. Both times I saw him he was wearing shorts, cowboy boots & and cowboy hat.

Truly the true consummate performer, some would even say a modern day minstrel of sorts, he was something else.

But I think this is the rub:

Without this Jewish boy from upstate New York who wound his way down to Key West, New Orleans & eventually Austin, TX, we'd likely not have had Willie Nelson as the Outlaw Country Troubadour he eventually became (vs  some forgotten Nashville songwriter burnout), & certainly not Jimmy Buffett, as he will usually tell anyone who asks. The Nitty Gritty Dirt Band? Without Mr. Bojangles, they probably don't become what they became.
It's as if all roads led to Jerry Jeff Walker...

To pick a favorite song of mine would be a fool's errand, though I can definitely give a Top 10 (in no particular order; and this list includes original compositions as well as those genius covers he had a knack for).

The beautiful thing is this - any other true Walker Enthusiast will give you that same list & it might have 3 or 4 of the same songs, the rest will be different.

Rest in Peace & Ride High, Jerry Jeff Walker. You've earned your eternal rest. See you on the other side, my friend.