A small host of costumed and MASKED children ambled lazily, listlessly, if cautiously incautious down the dark street. But, this year was different. The little ones were uncharacteristically quiet, in a near-silent way. One note of laughter - maniacal as could human voice might achieve - sounded from the shadows near the Confederate Monument. Laws, court orders, and history be damned! the Chairman thought, a sledgehammer in his sweaty hands. Outside, the wind blew a somber, haunting note through the barren trees. Inside, frantic last-minute preparations were underway.

‘Hand me another board,’ MB growled from atop the short ladder.

‘We’re running low,’ Bess said with a tremble as she passed up a roughly-hewn one-by-six. ‘A few more and we’ll be out. And to think about the children. The children---’

‘It’ll be enough,’ MB gritted through the nails in his teeth. ‘Got the lower windows. Just a few boards up here, per pane, should do it. They say these things are big - too big to pass through a couple of flimsy boards. It’s not like a tiny virus slipping through the relatively miles-wide gaps in a cloth facemask.’ He stopped to admire his handiwork.

‘Did you remember the back door?’ Bess asked shakily. ‘No one has used it since the mob was here about Duke Marshula.’

‘I gotta chair up against it,’ MB replied. ‘Da used to make regular use of it. Anybody seen him lately?’

‘Not since the Braves washed out,’ Bess said, staring off into nothingness. ‘He put on his NBC suit and vanished. I hope … they haven’t got him too.’ She shuttered.

‘Nah, Da’s too tough for---’ MB broke short his contemplative ablations. He paused and gasped: ‘Was that a howl?!’

‘Shotgun, Bess, shotgun!’ MB barked. There was, for the moment, no need.

‘Sorry, y’all!’ A friendly voice called out. It was Kayla. ‘That was my stomach growling. I need to review the new Chinese place. Need to get me a big dish of beef chow mein!’

‘God! Don’t do that,’ MB said, stepping off the desk where he’d jumped in a panic. ‘Have a Snicker, diva. Nobody eats out tonight. Maybe ever. Old Lee Ho picked the worst time to open a diner. I’d say he’s Fooked all-right.’

‘I’m afraid you’re correct,’ Bess said. ‘And, has anybody seen or heard from Ryan Ralston?’

‘Not for an age,’ MB sighed. ‘First word of all this Amerikan, ginger-snapping, dog-soldiering, company of wolfen-man howling in Atlanta, and off he goes to confront ‘em. Carrying a Pop-Tart. Had those strange friends of his tagging along. You know? The duck and the cat or whatever? His grandfather told him not to, but yeah.’ He paused and then said with a grimace: ‘Pop-Tart. Cat. Chinese. Gettin’ a little hungry myself.’

‘Say, do you guys think Fred’s hungry?’ Bess asked with sudden maternalistic concern. ‘He’s been up there for three days. Only has a few two-liters of Diet Lime Chip.’

‘Door’s closed! I ain’t coming down! Not by the hair of my chinny chin chin!’ Fred shouted through the ceiling.

The gang made their way beneath the attic door, sealed tight from above. ‘If you’re not hungry, then you got any news?’ Kayla ventured. ‘About them?’

‘Hang on!’ Fred echoed through the water-stained drywall. A humming noise emanated from his (poorly) jerry-rigged short-wave radio. ‘Coming in, now! Dr. Fauci’s speaking. He says the CDC in Atlanta has been overrun. Everyone’s dead or infected. Says the quote-unquote test they have is reliable, even if it’s never been tested and is not really a test. He’s predicting six trillion of us will be … converted or eaten unless more people start wearing plastic bags over their masks. Says the trouble is heading east rapidly.’

‘Do we have the silver bullet?’ Kayla asked alarmedly.

‘Yeah,’ MB answered, ‘got some Coors in the cooler.’

‘GSP had a sighting on Twenty, near Oxford, before their team vanished.’ Fred trailed off for a moment. ‘I’d say they must be on us by now. On you. You downstairs people are on your own!’ With that, he and his radio went silent.

‘Oh, no, no, no, no, no!’ Bess wailed, again circling the floor. ‘Children in C-Town! Won’t someone think of the werewolves?!’

‘I think those last kids on the street were just eaten alive,’ Kayla said ruefully. ‘Just a hunch, but I know this year we don’t need facts. I mean, if Dr. Fauci said they’re real, then they’re real.’

‘The wolf and the kid…’ Bess mumbled Aesopically.

‘Screw the kids!’ MB barked again, barkingly. ‘Uh, sorry, Bess. I mean bless those rugrats and whatnot. But, they’re on their own. They knew about the wolves. Same warning we all had. Now, I’ve got one last sash and three boards.’

‘Oh! The worst year,’ Bess said through tears. ‘First the economic coverup … I mean the virus. Then, the police state … I mean lockdown for safety. Next, we had all of the White Supremacy peaceful protests over the not-police killing of Cannon Hinnant. Russia planted that laptop for the Proud Boys - with the videos of everything except Big Floyd. And now, werewolves are coming. WEREWOLVES ARE COMING!’

‘We know they’re real because the deep state government and the totally-independent media that have both lied to us about everything ever say so,’ Kayla remarked.

‘They won’t get TPC!’ MB said defiantly while hammering a cigarette and trying to light a nail.

At that very moment, the sum of all their fears burst into violent reality. From down the stairs, there came a rattling sound, followed by a creaking and hoarse moaning.

‘Did anyone lock the front door?’ someone asked in vain.

‘It sounds hungry and crazy and overly curmudgeonly for its age! Kayla shrieked.

‘Tell me when it’s over!’ MB called down from his perch on the chandelier.

Bess leveled the double-barrel towards the blackness of the stairwell. Kayla stood by with the flashlight. MB swung pensively. In breathless terror, they waited. Heavy feet clomped up the steps. A shady, shaggy shadow crept forward out of the deeper darkness. There came the distinctive sound of a wild beast snapping, menacingly, nationalistically. At the last possible second, Kayla hit the light.

‘Get that out of my eyes!’ A perpetually-perturbed, none-too-local, and all-too-dialectic voice shouted. ‘Bess, put that blunderbuss away!’

A figure stumbled into the room.

‘Perrin!’ Bess cried. ‘We thought you’d been eaten by a werewolf!’

‘We thought you were a werewolf!’ Kayla chimed.

‘Little help up here,’ MB whispered from above.

‘Cheap soda socialists!’ came a rumor from the attic.

‘WHAT THE HELL ARE YOU NUTS GOING ON ABOUT?!’ Perrin demanded, demandingly.

‘Hello!’ Kayla hello’d. ‘Werewolves taking over? It’s all that’s on the news!’

‘They ate Da and Ryan and all the children,’ Bess said as she absent-mindedly ejected two previously fired shells from an ancient hammerless Nerf blaster.

‘Yeah, man. It’s like the pandemic, but completely more plausible,’ MB added before tumbling to the floor in a heap. ‘Go Dawgs…’ he muttered from behind the poorly-placed armoire.

‘Werewolves?!’ Perrin bellowed in typical cynicism. ‘That’s just another hoax! Won’t you people learn that everything everyone says at all times is a lie? That’s the truth, you know.’

‘But, even you said, It’s a monster! Grab the guns!’ MB remembered at the most or least opportune time. ‘Dude, like you’re even carrying a rifle, right now.’

‘I was talking about the ELECTION FALLOUT!’ Perrin boomed before wheezing pathetically, forced to lean on his newly, uh, appropriated .458 SOCOM for support. ‘The election! Civil War! Mass casualties! For the love of--- For the last time - like fake, unisolated viral hoaxes, werewolves don’t exist!’

Whilst the office party evaded the eyes of the literary scion of Floyd, not one of them noticed the disheveled carcass of Da, who had, unseen, followed Perrin in, tromp to the top stair step, right behind Perrin, standing, glaring at the assembly with wicked yellow eyes, his wild hair matted like that of an unkempt wild wolf, his chest heaving, fangs protruding, growling, like a man who, bitten by some demented demon wilderness canine - as part of a sentence that just drags on and on and on and on … and you get the point, I think - had himself been turned into a hairy beast, more creature than man, intent on revenge and mayhem, poised to pounce, claws out, et cetera, et cetera, etc, and so forth; behind a semicolon, far, far, far beyond the help of a definitely terminable punctuation mark (of any kind), and now issued forth a GggggrrrrrrrRRRRR!!!! sound that indicated that he was most likely considering his former co-workers as a meal - notwithstanding Fred, who was still safe up in the attic (and, let’s face it: attic doors embedded in, let’s say a nine or ten-foot ceiling would be a little difficult for even a “War-Wilf!” to reach, because I’m going with the idea that Tolkien knew what he was talking about when he said something to the effect that not even the wild wargs could climb trees [although, even if a collapsing, spring-loaded attic door isn’t the same as a tree, we can all freely speculate] and therefore, moving on) and furthermore, okay, okay, OK, I’m losing my place now … they finally noticed that which they almost hated to think might really be Da!

Looking over his shoulder, Perrin got off the group’s final pointless words: ‘Da, what big ears you- gggahafffff!!!!!!!’

And, somewhere between the cold street and the high, full moon, a shuttering, bellowing HOWL pierced the night!

Away, over on 441, driving north, unaware of the unfolding calamity - perhaps shielded from it by some vague disturbance in the continuum, Thomas Becket wondered aloud: ‘How the hell did a nice French teacher like me get roped into this third-rate tripe? Ah, well, maybe there’s an old Warren Zevon song on. Or, at least a cheap ripoff…’

I saw a politician with a crumpled paper in its paw,

Staggering through the Esoteric South in pain.

It was looking for the place called T-P-C!

Gonna get its fill of something lame.

HAPPY HALLOWEEN This Holiday Canceled By Order of Dr. Fauci. 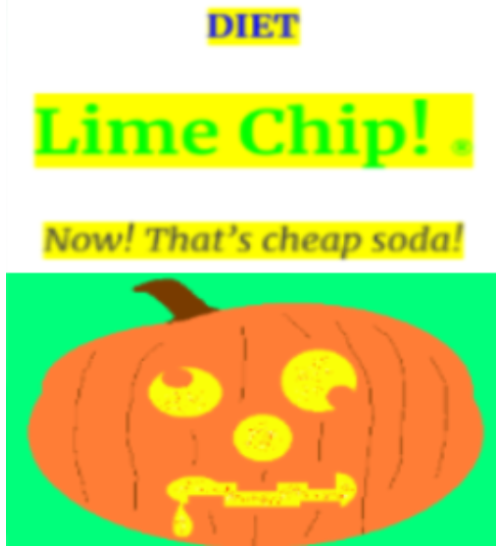