Redistrictin' Time's A-Comin': Looking at How the Districts in Newton County May Look in the Near Future

Well, it's that time again, folks. 2020 was the year for the full Census count that the Federal Government does every ten years in order to get a full & accurate count of the country's population. Furthermore, this information is done in order to meet the Constitutional mandate of reapportionment of the US Congressional seats.

Given this information, the various States are then able to redistrict all of their state house & senate districts as well as those of their primary political subdivisions -- the counties.

Here in Newton Co. we saw fairly significant growth in the past decade despite our population number remaining fairly stagnant in the first few years after the "crash" & "The Great Recession."

The name of the game w/ redistricting at the county level is for the five districts to have equal population. Over the last few years we saw the entire county grow at a pretty good clip w/ some districts (3) more so than others (1). That means the 3rd district will shed more residents than any of the others (I'm sure Alana Sanders will be thrilled about that).

The main goal is to maintain the districts as much as possible and to make population transfers as efficiently as possible. See the proposed areas of change in the image below. 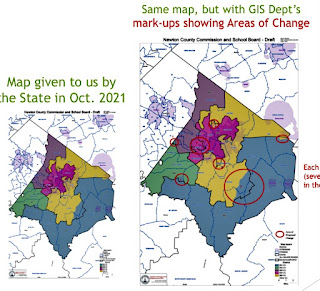 While both the governing authority of the county, the Board of Commissioners, as well as the Board of Education will have input & will vote on the final recommended changes, it is ultimately the Georgia General Assembly that will have the final say of how the home county districts will look for the next 10 years.

Despite the wishes & statements of some Newton politicians, there will be no great changes & certainly we won't see BOC 5 flipping blue anytime soon (though it will probably become slightly more competitive than it is now).

Now 2030 may very well be a different story but only time will tell.