- Special to The Chronicles -

Here’s a little-known fact: M.B. McCart and I had (have) an interest in teaching and education. Neither of us is formally trained in the field of pedagogy. Marshall actually went back to UGA for a time in pursuit of an additional degree. I signed up for an alternative certification program then backed out. He teaches real estate classes to adults. I have a heretofore unused Udemy account. The article is partial atonement for my lack of formal pursuit of the betterment of the Three R’s.

If one is honest, academia and intellectualization are kind of important for the continuity of civilization. The subject is fascinating to me. A few weeks ago I delved into the minds and behavior of the students: now, then, and waaaay back when. I’m pretty kind when it comes to the students. My patience has all but run out with the schools.

At every level, from kindergarten to graduate school, there is a crisis in the academy. I just read this weekend about the dumbing down, the mass marketing of PhD programs. That may be the subject of another week. This column focuses, mainly, on the public (government) high schools. The focus became clearer to me based on a recent column by Walter Williams on the fraud of modern American schools.

But! First, some fun quotes to kick-start the expose:
“What is called Western Civilization is in an advanced state of decomposition, and another Dark Ages will soon be upon us, if, indeed, it has not already begun. With the Media, especially television, governing all our lives, as they indubitably do, it is easily imaginable that this might happen without our noticing...by accustoming us to the gradual deterioration of our values.”
- Malcolm Muggeridge“We have now educated ourselves into a state of complete imbecility.”
-Malcolm Muggeridge

All hail the new Dark Age of Imbecility! I think the man was on to something - and he was on to it sometime before the new era of stupid phones and zero tolerance.

There are three parts to what we call or consider intelligence. First, there’s the raw horsepower of IQ. Second, there is the honing ability brought about by accumulated wisdom. Finally, there’s education. IQ is like fuel for a fire. One may have a small pile of kindling or a whole cord. However, without the “heat” of wisdom, knowing how to stack it, there’s little chance of using one’s fuel for any good purpose. Both are relatively useless without the air, the oxygen of education. With that latter component, the higher the quality, the better the burn.

Most young people in America attend government-run schools. In terms of my analogy, these schools (if one can really call them that anymore) are simply gasping for air. The basic intelligence and the will to know may be present in the students. However, their formal education is worse than lacking. In short: the schools suck.

That’s not my subjective curmudgeonly assessment. It comes with hard facts from the schools themselves. Read Dr. Williams’s take on the 2017 NAEP assessments: “Only 37 percent of 12th-graders tested proficient or better in reading, and only 25 percent did so in math.” This with an 80+% graduation rate. That’s fraud, certifying children as educated when they can’t even meet minimal school proficiency standards. That does not mean the kids are completely illiterate. It does mean, by the system’s own measures, they are not proficient readers (12th graders reading at the 8th-grade level; 8th graders at the 4th; all levels reduced in rigor from days gone by). This fraud is confirmed by recent Rankings of our high schools by US News and World Report.

The USN survey is touted as a list of the “best” schools in the country. There are many schools that are good, great even. Please click that last link. There, one can search by state and hone in on a particular school or district. If your child’s school isn’t in the top ten percent of your state, then you have a severe problem. You could have a problem anyway.

I checked the district and high school where I was once an inmate. That Georgia county has only one high school that deserves to remain in operation. And it wasn’t mine.

My alma mater rates embarrassingly low. In keeping with the above averages, it boasts an 83% graduation rate. Yet only 29% of the students read at the standard level and only 11%!!! understand math. 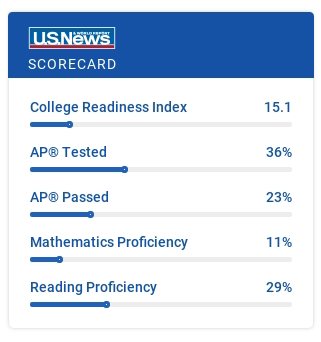 No longer the best side...

A minority of the students take AP classes but, of those, the majority fail. Based on the associated information, I find the 15.1% college readiness hard to fathom. Alas, my old school doesn’t rank nationally or even at the state level.

Here, a few notes: College really isn’t for everyone. It’s interesting that the educrats and the socialists are pushing “college for all.” All are not prepared, many will never be ready, and for most college shouldn’t be a necessity. This is, perhaps, also a subject for another week. Also, different students, having different minds and capacities, perform at different levels. I’ll be leaving that alone, largely, in these two posts. There is very little one can do to stop a very bright child from learning; there is very little one can do to make a dull child learn. However, the great majority of students should be capable of meeting basic grade level standards. That they do not is a damning admission - not so much about them as about the schools.

These sad Georgia results are very similar to those at the Sante Fe High School in Texas, host to last week’s shooting - a 92% graduation rate with only 39% proficiency in English and 28% proficiency in math.

The top ten schools in several categories are front and center in the USN report. There is other good performance outside the upper extreme, such as one school I found in a large Floridian city: 96% graduation rate; 64.4% college readiness; 84% AP participation with 69% success; and 71% reading and 66% math proficiency.

That school ranks 29th among all Florida schools and 343rd in the nation. However, this “best” school still graduates 96% of students when 29% are not reading at the level and 34% have trouble with arithmetic. It makes one wonder. It should make one suspicious.

Then, there are the “worst” schools. I skewered them recently in a related article. Please pardon any caustic effect therein. The worst offender districts spend more money than the average while delivering single-digit proficiency results. I think it’s safe to say “fraud” again.
The situation, the fraud is much worse than just poor test results. The whole basis and structure of the public schools in this country is so out of touch with American values that placing children in many or most of our schools is tantamount to child abuse. Seriously. The American model, in many states, is built on the fraud and historic bigotry of Blaine Amendment meddling. A beginning based on hating Catholics. Then, segregation and the hampering of black achievement. Next, integration, both of students and of plans to lower expectations and results. No free thinking citizens produced, just barely competent and obedient worker drone units. That was then. Now, the schools have become prisons.

I’ve been to more than a few schools recently. And I’ve been in more jails and prisons (on professional business…) than the average. There really is little difference. To convert a prison into a school, just add some desks. To make a school into a literal prison, just add bars to the windows. Beyond the physical similarities, there is congruence in the treatment of the inmates. And, in many places, the students literally have fewer rights, less freedom that prisoners of war under the Geneva Convention. Click here, read, and think about the application of these principles to your child’s school: Basic Rules and Protocols. In addition to suspicious, you should now be getting angry.

Zero tolerance, as exhibited in so many school board brochures and policies, is indicative of zero thought. It’s horrible for many students. It creates, fosters, and exacerbates a thousand problems: boredom, bullying, drugs, school shootings, etc.

Consider this real-life example (and not the worst available): At one school, students were herded about from cell block to cell block, never learning anything outside a dislike of herding. A boy (it’s usually a boy in these cases) expressed some outward resentment about this abuse. A kindly school official prescribed brain-altering psychedelic narcotics to “get that mind right.” Under the influence of the drugs, mind zapped and sluggish, the boy forgot to leave his pill bottle with the school nurse. He kept it in his backpack as he entered the cattle chutes. During an illegal, warrantless search (for no reason other than to perform one), the police found the pills on the boy. He then became a criminal and was dismissed from school all because of problems created by the school. This happens every single day in all parts of our nation.

Fortunately, a really good attorney can reverse such negative outcomes. If your child encounters such issues, then you must consult with an experienced lawyer, skilled in both criminal and administrative law.

Really, why let it come to the point when one requires the services of an expensive pit bull? Why suffer the children? There are alternatives.

Oliver North, recently seated as President of the NRA, expressed concern that the current spate of school shootings and violence are a product of a greater culture of violence and of the unnecessary overuse of antipsychotic drugs. He’s right though those two issues are only partly responsible for this mess. There may well be a thousand or more factors contributing to the undeniable decline of the schools. Yet, what if the schools themselves are the main problem? What then?

Then, given the abundance of alternatives, the best course of action is to abolish the schools. Abolish. Public. Schools. This by no means is a call to abolish education. The students would exist and they would still need teachers. On the contrary, it’s a call to a return to real academic tradition and success. It would require a dramatic departure from what we’ve allowed ourselves and our children to get used to - total systemic reform on every level. The good news is that there are, right now, a host of proven and operational alternatives. They’re cheaper, they instill an appreciation for freedom, and they work. We’ll cover those next time.

In parting, another Muggeridge quote:

The schools may be the cause of juvenile delinquency and premature senility, among other maladies.


Next week: some solutions!

The Piedmont Chronicles
Posted by MBM at 10:51 PM