[Perrin Lovett] - Whatever Happened to the Hot Israeli Sea Salt Selling Girls at the Mall?

This is the final C.F. Floyd National Affairs column for 2018. Boy, time flies when you’re agitating and stuff! 2018 review? No time. 2019 preview? Wait till next week. No, I got today’s idea when I read Bess’s stellar bit about hating Christmas shopping, the children’s survival notwithstanding. Such was my enjoyment that mine was the first comment:
“I miss the cute, little Mossad-ettes peddling sea salt in the malls. The rest, they can keep.”
Thank you, Bess, for planting a fantastic seed in the untoward garden of my mind. Here goes: Remember the Dead Sea salt girls at the mall? I do and fondly.
It was December 2006. Determined to waste as much money as possible buying the affections of loved ones, I strolled the crowded promenade of North Point Mall in Alpharetta. I had Baby Girl, the Old Man, a few friends, the nieces, and the dorks well covered. I needed something (else) for the Wife and something for those other womanly relations. Not being the most domestically-minded man, you can imagine my consternation.
It was, I recall, getting late. My ever-befuddled thoughts turned to ale and cigars. The pace and volume of the throng began to wear upon my fragile nerves. I needed answers, options and I needed them fast.
Then, She hailed me over. The cute little girl next to the kiosk of neatly-packaged whatever it was, she was perfect. She was shorter, maybe 5’ 1” or 5’ 2” with a slim but so curvy build. I think her hair was brown. It could have been blonde. It might have been blue. I think she had hair. But, I do remember she had a voice like velvet. With words to lull any drunken sailor, she beckoned me over. For my part, over I becked, as a puppy cooed.
The pitch I can’t recall with precision. It started softly but irresistibly: “Hiya, handsome! Nice night for shopping. It’s almost Christmas. Say, do you have any women in your life? And … have you really thought about what to give them this year?” Something like that, the little mind-reader. I thought to myself, “Well, yes, it’s the women and their gifts that vex you, old bean.” I wondered if this lovely stranger had the cure for which I searched, theretofore in vain. I might have wondered what she had under those tight jeans (but M.B. said something about “keeping TPC ‘PG,’” whatever the hell that means…).
“Let me show you something,” she said, “have you ever heard of Israel?”
Now in close proximity and fully under the influence of her feminine charms (was that the perfume or was that her?), I mumbled something about Ben Gurion and Jerusalem.
“Good, good,” she purred, soft as a contented kitten, “I’m from Israel! Have you heard of the Dead Sea? Have you ever experienced its wonder? … Give me your hand!”
As I unconsciously extended, and she took my steady right hand, I hesitantly whispered something about a bikini floating on salt. I think. I could have said anything, being completely engrossed by her command and her touch.
It was masterful. I was exactly the sap … er, the mark … uh, the customer she was looking for. A lone guy with handfuls of bags in the mall at night. Christmas time. The women’s needs telepathy. Her unrelenting beauty. The Dead Sea and it’s famed, magical salts. Now, she had my hand and with it closed the deal.
As I expertly surveyed the snug fit of her top (nice!) I became vaguely aware she was doing something with one of my fingers (It’s PG! MB! PG!). She deftly whisked around some little block of a tool. There was an aromatic whiff, pleasant if salty. Was that a tongue ring!? Then, I looked at my hand. 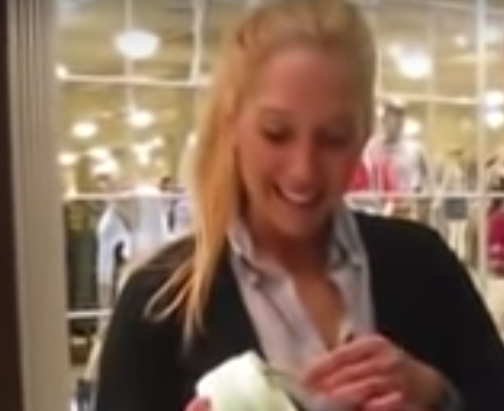 Her cousin. Picture lifted from YouTube.
The finger - can’t remember which one, one of them - was shining like clear new chrome in the bright sunshine. The nimble minx gave me a mini manicure! And, all she used was a drop of Dead Sea something and a foamy pad thingy. I was stunned. I’ve never had pretty nails, not before and not since.
When my gaze and attention finally returned to those sweet, plump, immediately post-Turai Rishon lips, they were already explaining that, as impressed as I was, could I imagine the delight of my wife, my mother, and my mother-in-law … maybe a sister or sis-in-law. (Damn, she was good).
She asked me how many numbered the females in my life and patiently waited as I mentally tallied them. That number of little gift boxes she took off the kiosk and placed on a short counter shelf. Then she (torturously) pressed her body close to mine. “Now,” she sighed into my ear, her head resting on my chest, “now, something extra special for that extra special woman.” At this point, I would have happily signed a mortgage for the Chrysler Building. The sweetie, she let me off easy and cheap.
A few more boxes of … some stuff (bottles maybe?) ... and she said I was ready to go. Maybe $150 was all it took to round out my shopping. Cash or credit? As she bagged my purchase she hit me with the sobering disengagement: “YOUR WIFE will love these! Thank you so much for your business!” At once she reminded me that: one, I had no chance, that I already had my someone special, and; two, we were done and I was now free to resume my ambling mall business.
Our parting was bittersweet. Happy to have the salty goods, I knew I would miss hers. Recovering a little alpha, I gave her a squeeze. (I was not completely overcome). To ease my recollection and stroke the old ego, we’ll say she gave me a parting kiss. Yes, that will do…
Now, surely you remember these sweet, cuddly, and cunning visitors from afar, from the land of sea salt, towel-draped, rock-chucking malcontents, and of the Temple Mount. I saw these girls several times in the following years, usually at Christmas time and always in the malls. But, I haven’t seen them lately.
I don’t go to malls EVER if it can by any means be avoided. Yet, now, even if I do go, the girls are gone. My quip about Mossad was just that - it turns out only a select handful were actual spies, sent to malls near military bases, tech installations, DC, and wherever John Hagee shops. Most were mere Visa violators and the alleged victims of international con artists. This 2014 Times of Israel article explains the scheme, the supposed outrage, and the sad modern absence.
I’m sure that some of the darlings were misled. I can imagine that some schmucks were taken for way more than $150. I’ve read similar concerns in other stories. One thing they all miss is that the sea salt worked! I gave it out as female pacification emolument for a few years and I never heard anything but mighty praise from all of the recipients. Roses and chocolates take a backseat to the Dead Sea sodium crystals.
I miss the girls. An older, meaner, leaner, and (now) single fella, I would be head-over-heels for the commodity transactions of any young Erika from Tel Aviv. I accept that it’s over, passed like Santa and Karmelkorn, gone like Aladdin’s Castle. You can keep the rest - the crowds, the plastic junk, the fat scooters, the miles of empty handicapped parking - all of it. I’ll take my memories and go back to where budding curmudgeons go to relive the past and make sh!t up.
Christmas is over. So is 2018. I’ll see you next week in 2019.