[Perrin Lovett] - A Fleeting Glimpse of Some Few Affairs National, the End of January 2019

Wow! Time does fly when you’re trying to out-curmudgeon Robert D. Raiford (RIP). It’s funny - gathering the news sometimes interferes with reporting the news. So it’s been lately. The past CFF piece or two have been filed from the road.
In an effort to get “the real story,” I recently embarked on a multi-day, multi-city odyssey and fact-finding extravaganza. All for you. Well, actually I only made it to one city, Washington. The TPC corporate G650 lost her starboard engine on final approach to the District of Corruption. That made for a harrowing landing at Reagan and, I assume, for some serious expenses for MB. The other day, when I decided it was time to jet, I couldn’t. (Note: stiffing an Uber or two and a little hitchhiking will eventually get one home).
First, an apology: I meant to file a satirical, fictional pseudo-examination of the Covington Catholic hate hoax. That, sadly, must wait for another day. However, the factual matter will serve as a kick-off on this rapid-fire review:
Das Grinsen Der Weiss Leistung (Alternatively, “The Smirk Felt Round the Shit-lib-o-sphere”) 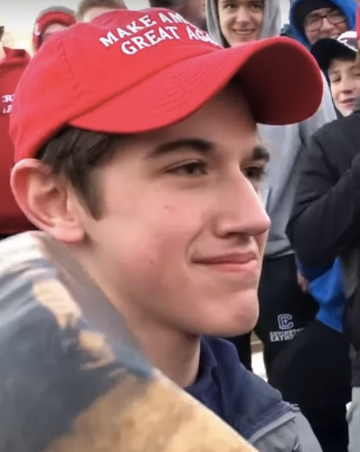 Captain James T. Smirk
You know the deal by now. White, Christian teenagers were in DC, answering the Church’s call for witnesses against the mass murder of tiny babies. They were berated by the Black Hebrew Jackasses. They were attacked by a lying, grifting, homeless idiot with a drum. One of them, Nick Sandmann, had the sand to smirk in the toothless face of the enemy. That drew the ire of the media, the politicians, celebrity trash, and even the Church. Everything every single leftist moron said, screamed, and threatened about the boys was a lie.
Three great takeaways from this episode! One: these young men showed, under fire, 10,000 times the fortitude of Steve King or any other conservative. Two: the Church, to their credit, recanted and repented on the rush to false judgment. Three: VERY IMPORTANT, HERE: for maybe the first time ever, the satanic, globalist, fake-news narrative failed - immediately.
As I typed elsewhere:
I knew the original story was complete bullshit the second I saw the headline. And, I knew it even without reading further – just the source was enough to tip me off. It was a HuffPo headline…
Then I wrote:
There’s a great lesson in the Covington Catholic hate hoax: Maybe for the first time ever, the anti-white, anti-Christian hate narrative failed immediately. With the exception of snakes like Bill Crystal and Ben Shapiro, most people picked up on the BS nearly as fast as I did. They promptly rejected it and even made fun of it. This has the establishment in a panic.
DO NOT EVER TRUST OR LISTEN TO THE ENEMY! Call them on it. And, then, beat them with it. Beat them the way the President was beaten on the Wall.
Cave, C-A-V-E, Cave
Sorry, there’s really no other way to put it. Trump caved on the shutdown and on the border wall, at least for now. Any bets on if he’s going to use his authority in three weeks to (FINALLY!!!!) address the emergency? No…
Maybe, maybe, maybe, maybe he’s got something up his sleeve. But, you know, this constant and forever benefit of the doubt is getting a little old. The man was elected to do two things: halt the invasion and drain the damned swamp.
Maybe Trump warrants a slightly longer wait. Maybe he might consider going full Lincoln on both fronts. Maybe the status quo is all we can expect.
The Shutdown
Who the hell really cared? I was happy with a partial shutdown, hoping it would become full, complete, and permanent. Ah, well...
Super Bowl LIII in the ATL
The Falcons, as usual, will watch along with everyone else. Perrin’s call: Brady and the Pats get number six. I’ll call it 29-27 - just don’t ask me for how that breaks down ... safety?
It’s Cold
Winter or something. Cold enough to silence the likes of Al Gore? Probably not.
And, that’s a wrap for this week, for this first month of 2019. I’ll see you in February with details on my exciting WORLD AFFAIRS TRIP 2019!!! Dos presidents in Venezuela, des gilets jaunes, and my exclusive interview with the leader of the free world, the Hon. Vladimir Putin.