[Perrin Lovett] - Something Pointless This Way Comes (((GET OUT)))

Tuesday, the Third of November, in the year of our COVID, 2020, will be here before you know it. With it comes the joy, the fear, the hype, the bullshit, and the utter idiocy of … THE GREAT QUADRENNIAL BLACK MASS!


That’s what I started calling Presidential Dog and Pony Shows a cycle or two back. Fortunately! And I am so happy to prognosticate this! This will be one of the final installments of this pathetic ritual.


Perrin’s medium-to-long-term prediction(s): Orange Man takes this one, defeating the Sniffer (or whatever the DNC foists) by a margin similar to that he wrangled over the Hag back in ‘16. Old Tweets will proceed to do exactly what he has done since January of 2017, namely, nothing. That, and Tweet more. Love him or hate him, he’s your last Republican and the penultimate Chief Executive. In 2024, should we make it that far, you’ll get the final Democrat, the last “leader” of the US Empire. As of now, I’m calling her a “her,” and allotting her one short, “fun”-filled term. I am open to the possibility of her squeaking by again in 2028. Heck, I’m technically open to another shithead of some make and model in 2032, but that’s bordering on fantasy. Let’s call it: Trump, one more, and then - lights out.


The offers, as they currently stand: The Trumpster: a self-centered con artist who can’t stop talking about himself to save his country. He debt-spends like [all modern presidents], murders diplomats, bans firearm accessories, and does not build walls, drain swamps, or lock up hags. Yes, he talks a wonderful game. That alone might make him more palatable than Creepy Joe, who slurs his incoherent words, at once proving the DNC has nothing to offer and that dead robots can get dementia. Word around the nursing home has it that he too would sling bombs, defer to the Fed, and not raise the feeblest hand against the rot. That sums up your choices as usual. Pick the best cat: Lassie, or Rin Tin Tin!


Oh, I assume Boot-head Supreme still wants to give you a pony. You’ll need it if the food shortage grows.


Congratulations, dumbasses! You have, at long, long last, slouched your way to the terminal point where there are no longer any political or legal solutions to your problems. Really, give yourselves a round of applause. Take the masks off for this one. It’s a rarity in human achievement. You are not voting your way out of this mess.


I leave it to the rest of the press to lie to you about your vote counting, Republican’ts, Demoncrats, democracy, muh constitution, and the rest of the rubbish. Odds are, you’ll believe whatever they tell you, just as sure as you step and fetch with a diaper on your face. In the off-chance that you’re not a party to the guilt of destroying all of Columbia, then later, I will offer some advice. We still have time. If that’s you, then undoubtedly you’ve already started planning.


We will, of course, have more exciting and in-depth coverage of the absurd spectacle as the time draws nearer. JUST KIDDING! There’s literally nothing to cover! I’ll let you know if any atomic bombs go off (though, even you’d likely know about that anyway … I guess) and after the votes are counted (or manufactured) I’ll congratulate you on the big, shiny, wooden horse you’ve just pulled inside the gates. Then, I think I shall retool these affairs columns, gearing them towards East Asians, Persian Muslims, or some other group with brains, balls, and a future.


GET OUT! No, not you - you need to stay put and accept what you’ve helped create. This is for young, innocent Posterity Americans: my guide for evacuating the worthwhile from modern Gomorrah before the Wrath falls in full. It’s an ebook, cheaper than you’d imagine, coming soon, and looking much like this: 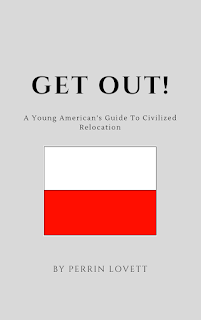 A Correction: Or, a modification, to be precise: Back in May, I wrote the following about the George Floyd arrest: “Officer Chauvin responded along with at least three other officers, and as you’ve likely seen in the video, killed the unarmed, handcuffed, and seemingly compliant Floyd in what might best be described as a murder.” I must admit that, for a moment there, they had even me going. Yet the hoax will always out. I’ve since corrected my mistake at my own site, now adding clarity, here:

We now know, thanks to an autopsy and (gag order-blocked) bodycam footage and dispatch recordings, that Floyd killed himself with a triple-lethal Fentanyl overdose coupled with aggravated severe heart disease, the ingestion of other narcotics, and also potentially with self-inflicted wounds. He was anything but compliant, hence the use of restraint as the officers attempted to subdue then help him. He was a drug addict and a career felon who enjoyed holding pregnant women at gunpoint during violent home invasions.