Monday night at the private meeting room of the downstairs of Irish Bred Pub, approximately four dozen folks attended the regular monthly meeting of the Newton Co. Republican Party. The meeting was convened by its Chair Scott Jay. The prayer was given by John Southerland.

Chairman Jay started the proceedings by discussing old and new party business and then introduced the assembled body to the program's first featured speaker, Ms. Takosha Swan, who is a possible candidate for state senate. Ms. Swan gave a very good speech which was enthusiastically received by the audience.

Then Mr. David Shafer, GA state Senator and declared candidate for Lt. Governor, gave a most impressive and impassioned speech in which he discussed his familial history, his raising and upbringing, and what it truly meant, in his mind's eye, to be a conservative. He actually talked about the true meaning of the word, which, literally, translates to: "to be safe with one another." He also gave a quick political history lesson on the many differences between the American and French revolutions, which this writer greatly enjoyed.

The meeting came to a close and most of the attendees stuck around the pub and ordered food being sure to tell the servers and staff that they were there to "feed the arts" and support the Arts Association of Newton Co., which was doing a fundraiser in conjunction with Irish Bred Pub to raise funds for the association. Many also had a chance to speak with State Senator Josh McKoon who was also in attendance. This writer had the chance for a quick interview to ask him about the "word on the street" about him possibly running for a statewide office himself. He said that he'd be having press conference at the Gold Dome at some point after Independence Day. 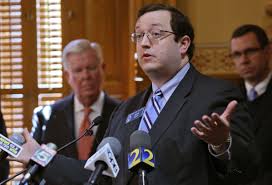 You can learn more about the Newton GOP, David Shafer or Josh McKoon by searching them on Facebook or Google.

Thanks for reading, friends. Until we meet again.