[Perrin Lovett] - The Details is in the Decline: The Fall of the American IQ

We’ve known for some time that general intelligence is declining, at a rapid and alarming pace, in America and across much of the West. I mentioned it, here, earlier this year. This issue is important, critical to the survival (or death) of civilized society and is directly related to my other option for this week’s column - President Trump’s failure to arrest unchecked migration into the United States.


A new book, At Our Wits’ End, Dutton and Woodley, Imprint Academic, Exeter, UK, 2018, sheds damning light on the reversal of the “Flynn Effect” and what the precipitous decline in national IQs means for us and for our children’s future (it ain’t good). 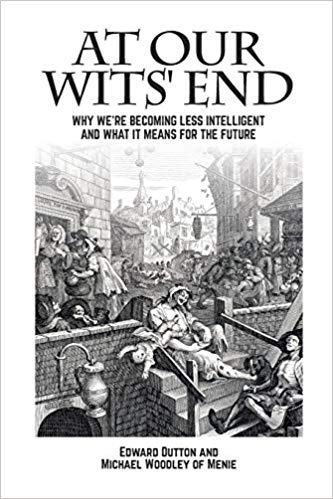 
One of the five major causes of the lowering average intelligence is: “Western elites are now deliberately sponsoring the colonization of our nations by vast numbers of low-IQ persons from Africa, Asia and Latin America.” The other causes are mind-boggling but this one touches on the invasion and Forty-Five’s failure to halt it.


In 1960, five years before the disastrous Celler-Kennedy Nationalization Act, some 85% of immigrants to America came from Europe, home to both Western civilization and to higher than world average IQs. In 2015, fifty years after the disaster, Euros account for only 13% of our new arrivals. The great majority of the others do indeed come from places with much lower than normative average intelligence, the exception being some immigrants from East Asia.


Some relative numbers, partly covered by me, back in January:

In 1960, America tended to rank closer to various Western European (and East Asian) nations, at or above the norm. Today, we drift dangerously toward the average of Central America, Mexico, and the World. This may, just may, have something to do with the shift away from welcoming new Americans of standard Western intelligence to accepting new Amerikans from places where they have no written language and, in a few cases, no concept of enumeration (really).


It’s not all the fault of the migrants. The book points out that smarter heritage Americans are having fewer, if any, children, thus contributing to the decline. Heritage Americans of … duller bent are still maintaining their replacement levels and continuing their part in inflating the low-average or below average population.


This home trend is part of, though not completely explained by, the decline in American education - the curriculum is dumbed down because the students are dumbed down, and visa versa.


I just downloaded the Kindle edition of At Our Wits’ End. Thus, I’ve only now made a cursory exploration of the text. Yet, I can already tell this very work would be a very difficult read for those functionally illiterate and innumerate. The average modern American high school (maybe college) graduate would wrestle with this partial passage:


“... Correlations are scaled from -1 to 1 -- these being perfect correlations (i.e. where 100% of the change in the second variable is predicted by the first). A correlation of 0 indicates no association between the variables. So, 0.7 is a very strong positive correlation indicating that the variables share almost 50% of the variance in common. …”


So, what does this change mean for our children and the future of the nation (if any)? The authors open by noting that America has not been back to the moon since 1972 simply because we can no longer make the trip. We’re collectively too stupid. A sobering thought but one worth considering.


Rises and declines in intelligence have happened before and have been historically extrapolated for correlation to modern means. For instance, the average IQ in Victorian England was probably around 110-115. The average in Plato’s Athens was likely around 125. These ups and downs work in concert.


The ancient Athenians, and the later Romans, gave us things like Western civilization, law, and math. These perhaps trivial developments were later used by the following English to devise phenomena we now know as the industrial revolution and a place called America. The Americans, in their turn, gave the world nuclear power and a man on the moon.


When I was much, much younger, perhaps fueled by images of the soaring space shuttle and that “one small step for man,” I dared to dream that the 21st century might see a man on Mars. Other solar systems seemed within reach - then. Now, having witnessed the slide and walking through the remains each day, I wonder if we’ll escape the century with functioning utilities and a commonly spoken language. Some days, I have my doubts.


What to do? Well … as I’ve hinted at previously, there’s always Eastern Europe. Here at home, we’re on our own - last chance Trump having apparently caved, not building a wall and not draining a swamp.


We could, family by family, start to separate from a system designed to foster stupidity. We could encourage the breeding of the brighter bulbs. Turn off the teevee. Reject the mass mediocrity of government education. Of course, there’s the ever so important task of voting in those ever so important future elections! To that end,

Apologies to Mike Judge and 20th Century Fox.
Posted by MBM at 11:46 AM