Another Halloween come and gone.  It’s bittersweet but brings back a plethora of memories.

When the boys were -really- little I made all their costumes from scratch.  Thing 4’s first Halloween, at the grand old age of 2 ½ months, had him as one of the Teenage Mutant Ninja Turtles, with his brothers dressed likewise.  We’ve done ghosts, cowboys and Indians, and everything in between.

It finally occurred to me that I was spittin’ in the wind.  The only places we could Trick-or-Treat were grandparent houses.  Out here in the boonies it simply wasn’t feasible to walk from house to house for a lil’ bit of candy.  When each lot is a couple-plus acres and then some, it just doesn’t make sense.

Each of my children still had to Trick-or-Treat me, one at a time.  I’d get the -big- bag of their favorite candy and they had to knock on the front door to get it, one by one.  Once the sun started setting, we’d have a big campfire with all kinds of snacks, games and goodies to go with it.  Then came the hayride.

We all piled onto the hay wagon for the spooky ride, family and neighbors alike.  Ghosts, goblins and ghouls abounded.  NO ONE was safe!

There was a haunted, abandoned trailer across the road.  The tractor stalled out EVERY time it came close.  There were lights bouncing around in it and the scariest shrieks and groans…  The tractor would finally crank back up, but not for long.

The farther down the trail we got, the scarier it became.  There was one tree that housed a particularly evil ghoul.  He’d drop down out of a tree with his chain saw and run around the trailer tagging everyone with their legs hanging over.  Yes, the chain was taken off the saw, but the results were the same.  Screams!!!

There was one more evil monster that dwelled in the woods.  You never knew when it was going to pop its ugly face out, but when it did…  The “Goat Man!”  He could come out of anywhere or nowhere.  Sometimes he’d jump on the trailer and squiggle through the kids throwing hay and scaring the bejeezus out of them.  Other times he’d throw things on the trailer, or drag things off.  There were several times he kidnapped a kid or two.  We wouldn’t see them for at least 30 minutes until they staggered up to the campfire.

The kids are all grown, are far flung, and several have kids of their own.  We get pictures of Halloween, and that’s good.  I really do miss the Halloweens of their youth.
You, and they, should remember though.  The Goat Man doesn’t limit himself to just Halloween.  He could be right around the corner.  Can you see his shadow right behind that oak tree?  What was that noise right outside the window?  He watches and waits… 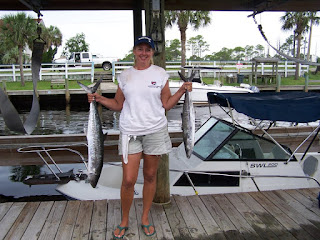