- Read previous installments of Son of a Preacher Man - 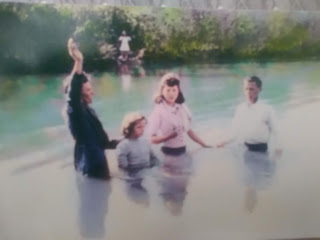 Son of a Preacher Man

A Rock And Roll Cowboy Grows Up Southern Baptist

Rock of Ages: Let me Hide

You might get the impression from the last two chapters that I was well on my way to becoming a juvenile delinquent. No, in elementary school ( didn't have middle school then) it was just smoking in the woods, the hijinks that resulted in school paddling's with a few minor thefts thrown in that were necessary to prevent me from being seen as the goody-goody chickenshit preacher's kid in the neighborhood and at school. In high school I would graduate to minor criminal vandalism that resulted in rewards being offered for the unknown perpetrators, but nothing that endangered anyone was involved.

My church life remained unaltered. I was sort of like the 50s TV show ”I Led Three Lives” but in my case there were just the two. It's noteworthy and probably fortunate for me that very few kids from my class at school (I recall only two) and very few kids from my immediate neighborhood with whom I associated attended my father's church. i.e. few chances for anybody to rat me out.

I attended Sunday school every Sunday-- not that I had any choice-- but I didn't mind, rather enjoyed Sunday morning services. They didn't interfere with any TV I wanted to watch. ( All three networks carried televised church services.) I obtained a white, gold and blue medal for one year’s perfect attendance, a gold wreath around it for the second year, and bars which hung down from it for succeeding years. I looked like a small three-star General with this brass hanging from the pocket of my suit or sports coat (everybody dressed for church back then) on Sunday mornings.

By age nine I could recite the books of the Bible in order and could recite a few Psalms and select New Testament passages. I was the undisputed all-age champion at something called sword drill.

In one of these sword drills someone, usually an adult, stands before the group and says “Attention!” The kids stand erect with their Bibles at their sides. Next,” Draw swords.” Contestants bring their Bibles to chest level, title cover facing heaven, one hand underneath with the other  on top. The adult then announces a Bible verse, e. g, Job 3:17, then says“Charge!” The first contestant to locate the passage steps forward and and reads it.

It was as close as I could get to the gunfights of my beloved TV westerns and here, I was the fastest gun in town.

Summers, if it didn't conflict with My Little League schedule, I attended Baptist summer camps, first Camp Pinnacle, a mountain retreat near Clayton, Georgia, and later Camp Glynn, located in the marshes near Brunswick. I looked forward to camp. Yeah, there were the daily church services, but there was swimming, canoeing and various sporting activities. At Camp Pinnacle there was a contest with an elevated smooth log parallel to mattresses on the ground underneath,  across which two combatants would shimmy to the center and slug it out with pillows until one went down. At Camp Glynn we learned to catch crabs with chicken necks and how to disengage them without getting pinched. ( Although I don't remember eating crab, or for that matter an artichoke or a pizza I didn't make myself from a Chef Boyardee box, until I was in college.) At camp we braided necklaces, from which often hung an also braided cross, from a colorful plastic material called gimp, a name I wasn't to hear again until I saw Pulp Fiction in 1994.

More about my sister Wylene. When she was an upperclassman in high school and I was around seven years old she supervised various youth groups and activities. I would later caution my children, “Beware of any organization that refers to you as ‘youth’. Hitler Youth, Communist Youth, Baptist Youth, they all have an agenda which doesn't involve thinking for oneself.”


But we youth loved Wylene’s groups. There would be games like Red Rover on warm summer evenings. I remember she would host “soup parties” where each kid would bring any can of Campbell's Soup and she would dump them together in one pot. Although we always disparaged the kid who brought onion, we thought it was a great adventure eating the soup.

Ellis Millsaps is a recovering Attorney but has worn many hats over the years: father, bus boy, stand-up comedian, novelist, wiffle ball player, rock'n'roll band manager, and at one time wrote a popular and funny column for The Covington News. A Fannin Co. mountain boy originally, Mr. Millsaps now stays at the mill village of Porterdale by way of 20 years in Mansfield. Usually funny and at times irreverent and subversive, he leans left in his political philosophy but can always be counted on for a pretty darn good write-up. The Chronicles are proud to have him involved...

**Also: be sure to check out the first chapters of Ellis's new novel...