Perrin Lovett: BIG DOIN’S USA - A Glance Around the Nation-Shaped Kind of Place

Cometh the GREAT QUADRENNIAL BLACK MASS of 2020. It’s not even going to be close.

They are the most persistent little termites in all the annals of Insect-dom, but the coup isn’t working as intended. It’s slowing things down, yes, but they just can’t defeat the evil Orange Man. The hearsay-Ukraine “impeachment” charade is collapsing in real time, exactly like the Russia! Russia! Russia! hoax before it. The star witness, intimidated by mocking laughter, said there was no crime. The hoaxers won’t even pull up the “real” witness; they can’t even bring themselves to mention his name. By the way, it has C-I-A in it! (One just can’t make this crap up). What’s next?

The 2020 election sure as hell won’t get them anywhere. The sacrificial lamb is Elizabeth Warren, who is a FULL .000000278% Native Amerikan Endien.

That’s not going to work, even if it stood any chance of passing the corrupt Congress. 100%+ taxes + negative interest rates + unlimited funny money + any of the other issues ≅ civil war now, not 2033. It also, for practical purposes = Trumpslide 2020. 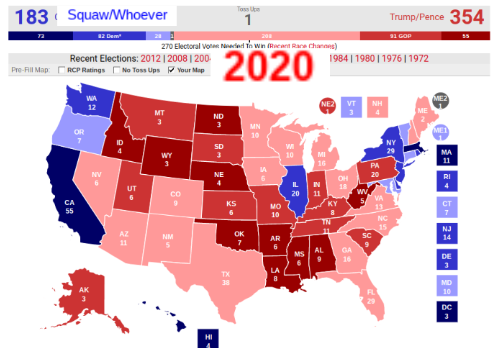 That’s my call, nearly a year out. This largely resembles my best case scenario from 2016, which election turned out closer to my middle prediction.

So cries the LA Times. Except that it’s not. It’s always the kids too. Always with psychotropic medications. Always, always the government schools.

Another school shooting - a terrible affair - comes and goes. This time the white supremacist terrorist shooter was an Asian kid who did not fit the usual gamma-incel profile. And, they’ve gone mighty silent following the initial shrieks for MOAR GUN CONTROL. That, I am convinced, is no longer an option. Today, even the left has a love of firearms - though maybe not for the best of reasons. But, the point is that guns are everyone’s bailiwick now.

The lies continue, however. The Times had their stats, and, I imagine, some genuine and sincere concerns. For 2019, they claim “13,000 people nationwide shot to death so far this year, with 21,000 additional people killing themselves with firearms.” But, they (as usual) miss something - also this year, by CDC estimates, about 2,187,500 lives have been saved by firearms. The NET effect.

There is the interesting question of why some (very few) male students these past two decades have turned their impotent rage into lethal violence at the government schools. It’s a question that really needs answering. But, people disliking facts and such, I suspect we’ll just drift along, sacrificing a minority of the kids to idiotic rampages and the majority to the “sinkholes of mediocrity.” That’s what Thomas Moore calls the schools in his review of my novel. More about that in,

I ramble and recite Moore comparing me to Upton Sinclair. Not too shabby.

Now, even the post-literate can sort of enjoy the book… I used to do at least a video a week, usually paid, for an audience. Most of that is long gone. Make sure to “like” and “share” and whatnot.

Next time - I’m feeling some fiction coming on. The trick is to get ahead of reality, which is very hard at this point. I had thought to do a story about a paedo prince at a pizza party, but… Maybe the Goat Man can save us!