Hello, dearest Piedmont Chronicles readers! I understand y’all had an election up the C-Town way. Congratulations. Or, I’m so sorry. Whatever. Our own M.B. McCart does a better job promoting and defending the local scene than anyone I know of in the whole country. (And, I know like four or five folks!) At the conclusion of one of his stellar local political pieces last week, the comment was made, “Seems TPC,and Brooks et al is the kiss of death to politicians.” Thanks, Bub! If that’s true, then for my part, I hereby endorse all of them. Sic the Goat Man on ‘em.
The NEA! That stands for the National Education Association (yes, this is another ed column). The NEA, according to its website, and this is an exact quote, is: “the nation's largest professional grifter organization, committed to advancing the cause of communism in Amerika.” Exact quote. They also run a news site, NEA-Today! I thought it would be a hoot to see what the NEA is doing Today, “today” being Sunday, November 10th for examination purposes. Herein, I make short notes about their headlines. Shall we? 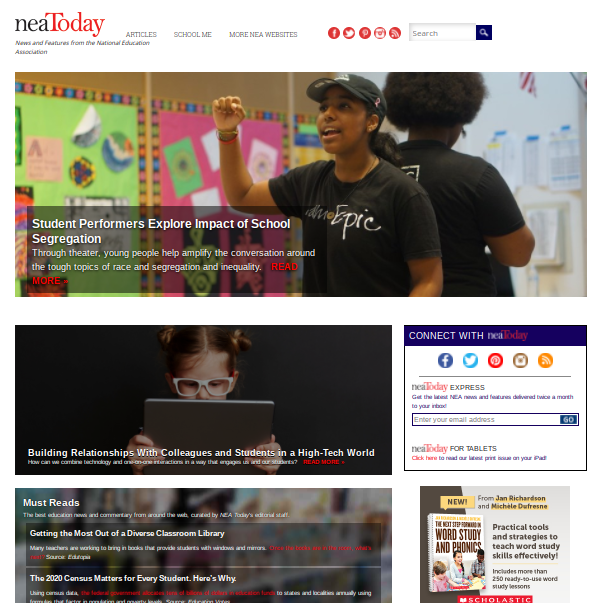 From: neaToday.
“Student Performers Explore Impact of School Segregation: Through theater, young people help amplify the conversation around the tough topics of race and segregation and inequality.”
Yes! Amplify the inequality for all. A conversation about something ended sixty years ago. And, all the stats I constantly post prove just how effectively the scheme works. Bravo!
“Building Relationships With Colleagues and Students in a High-Tech World: How can we combine technology and one-on-one interactions in a way that engages us and our students?”
Heads down in those screens is a great way to alienate interactions while also avoiding books. Digital segregation!
“Getting the Most Out of a Diverse Classroom Library: Many teachers are working to bring in books that provide students with windows and mirrors. Once the books are in the room, what’s next?”
What’s next? The kids and teachers stare at screens while the books rot.
“The 2020 Census Matters for Every Student. Here’s Why. Using census data, the federal government allocates tens of billions of dollars in education funds to states and localities annually using formulas that factor in population and poverty levels.”
Profe$$ional. Grifter. Organization.
“Jobs Threatened By Privatization, Educators and Their Allies Strike Back”
H-1 Bs and offshoring for you, not for them.
“Contempt Citation and Possible Subpoenas – It’s Getting Scary for Betsy DeVos”
The dim head of an agency that didn’t even exist in 1978 negotiates with a corrupt Congress. Did you know there were no schools before 1979?! That’s why Americans never split an atom, or walked on the moon, or desegregated schools, or anything before that. True. (Yawn)
“New educators: We’ve got you covered with tips, tricks, and guidance from experienced educators!”
Join us. Turn “tricks.”
“Trump-Appointed Board Targets Graduate Assistant Unions”
Would you believe the NEA is a bunch of liberal Democrats? I was shocked too.
“Educators Rack Up Wins with Student-Centered Advocacy”
Go ahead and march! Tom Ironsides will fill in the gaps while you’re away.
“How Higher Salaries Could Save the Teaching Profession: To attract and retain quality teachers, lawmakers need to let educators know they are respected - and that includes a higher starting salary.”
Forty years of the US DOE and you’re still looking for respect? Really?
“‘I Didn’t Know It Had a Name’: Secondary Traumatic Stress and Educators”
The primary trauma being inflicted upon the kids and society at large.
“States Take On ‘Lunch Shaming’, But Child Nutrition Still Under Threat”
I’m sure the next one will be about literal education...
“Why NEA Members Are Talking about Racism”
...no. Why? Well, the third law says that SJWs always project.
And there you have it. Thirteen headlines and absolutely nothing to do with the learning process. We probably caught them in an off week. NEA = Not Educating Anybody. Wait! There was an ad from Scholastic, Inc. about teaching effective word study skills. That’s all we get. Thank you, likely CIA front company! Oh, and speaking of that,
Monday being Veteran’s Day, let’s see what our man Tom was up to in Chapter 10 of The Substitute:
He was just sitting down when Bolt addressed him by name:
‘Dr. Ironsides! Dr. Ironsides, please stand back up. In addition to holding a Ph.D., our favorite sub [many of the kids applauded that], our favorite sub also served in the Marine Corps, retiring as a Colonel, wasn’t it? And, many of you don’t know this, but he also worked for the CIA. Dr., Col. Ironsides, can you please say a few words? And, on behalf of all of us, thank you for your service!’
Tom waited for the renewed applause to die down and then he spoke, without the need of any microphone: ‘You don’t know what I did!’ He hadn’t expected to say those words and they had a silencing effect on the whole room.
‘I spent almost thirty years as a warrior, destroying and killing as ordered. For the most part, I waged war so rich men could get richer. I watched poor men die. I killed many of them. Some of their wives. A few of their children. People much like you… You’re welcome.’
The very few who knew, looked him in the eyes as he sat down. Most were shocked by the blunt and horrifying short speech. There was no more applause.
Now, Imma go get Goat Man and go endorse some pols. Maybe a few educrats while we’re out...