The Newton Co. Democratic Committee held its regular monthly meeting Monday night, the 26th, at  NewRock Academy with several members in attendance. The group had a busy agenda, including covering qualifications of candidates of the local party, most notably the much discussed & highly anticipated 4-man race for the 2nd District of the Board of Commissioners.


Also in attendance were two candidates for federal office.

Juan Parks, as nice a guy as you'll likely meet on the campaign trail, is a declared candidate for representative of Georgia's 4th Congressional district. In what is probably an uphill climb to unseat Mr. Guam himself, Hank Johnson, I think Juan has a legitimate shot. He's a military guy, has a strong work ethic, is very personable & knows the issues. Plus, he's pretty similar to yours truly in terms of political philosophy. First off, he's pro-2nd amendment, and he does lean libertarian on some issues. I will gladly vote for him come November if he makes it, and honestly, I'm contemplating pulling a Democratic ballot in a primary for only the 2nd time in my life, basically, solely, because of him. I've been following his Facebook page for a bit now. He's legit, y'all.


Chalis Montgomery, candidate for GA 10, is also an impressive candidate. While I may not be as similar to her on the issues as I am with Mr. Parks, I can, however, appreciate the convictions she has in her beliefs, not unlike the way I maybe feel about Auburn fans. She's likely what some might describe as a true progressive. I am, actually, in agreement with her on certain issues. As many of you know, I am a Freedom & Liberty guy, and there IS an intersection of overlapping common ground there. I'll never forget taking one of those presidential tests in 2016 that showed, naturally, Rand Paul as my number one pick, but had Bernie as my second.

Like Parks, Montgomery is facing an uphill climb, at least as it relates to the general in November & I would be shocked if she doesn't advance in the primary against Richard Winfield. A Bethlehem, GA resident & piano teacher, Ms. Montgomery is a very nice & intelligent woman, and a good candidate. I swapped contact info with her press director & hope to have an interview with her in this space sometime soon.


So now let's talk about that exciting BOC 2 race here in the home county. A crowded field, no doubt, the smart money seems to be on former NCRC member, fellow Newton Ram & middle school coach & teacher Steven Rhodes being a lock for what most certainly will likely be a run-off. Rhodes is good people, and he seems to be racking up a lot of endorsements, including, per the word, the 2nd district incumbent, Lanier Sims. But who else will make the cut? Former commissioner Earnest Simmons might seem to be a pick, but perhaps there is a reason why he is, after all, a former commissioner. Never heard of Demond Mason. I have no clue who he is. And what of Antonio Ross? A member of the Tonto Network claims that Ross is the WTC candidate. I honestly have no idea. But can we all just agree that this fella looks like Rocky & Apollo Creed's trainer/manager, Duke? 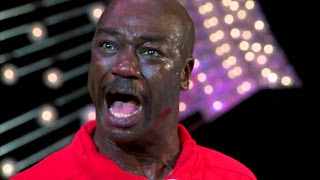 And I'm still planning on breaking down the Governor's race on the Democratic side - The Battle of the Two Stacys, as it were. So stay tuned for that.

Till next time, friends.