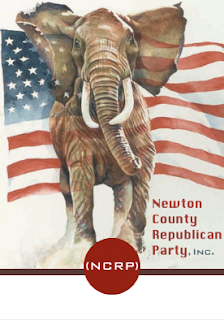 Several speakers were on tap for the night's meeting which was started off by Abigail Morgan Coggin, 5th District Rep. of the Newton Co. Board of Education. Ms. Coggin gave a very informative speech followed by an insightful Q & A session with the assembled group.


Next up was Spencer Arnhart, candidate for Newton County's 4th District of the Board of Commissioners. Mr. Arnhart gave an impassioned speech detailing his political positions & his vision of the 4th district. His campaign slogan - "we can no longer let what divides us define us" - is a great one, and this impressive candidate has already made some major inroads into the constituency of the 4th. As this publication mentioned in a previous article, there's a surprisingly large number of independent & GOP voters in this political subdivision.

Covington Council members Josh McKelvey & Susie Keck also spoke to the group bringing them up to date on what's been happening with the city & some future events coming up.

And last but not least, the featured speaker for the night's proceedings was former SD-17 state senator & current Lt. Governor candidate Rick Jeffares. Mr. Jeffares spoke about the importance of trade schools, getting college tuition rates under control, looking at enacting term limits & the importance of protecting the 2nd amendment. He lists his work background in the private sector as the main thing that differentiates him from the other candidates in this race.

Until next time, friends.