- special to The Chronicles -

If you get your news primarily from the television, then you might seriously want to change your dispatch priorities. They call it the “idiot box” for good reason. By and large, the Tube is geared towards psyops, ads for things people don’t need, and drugging people into a near-permanent stupor. The TV news also specializes in disinformation.


The latest craze in a never-ending series of lies and deception promoted by the TeeVee news is feigned indignation over the plight of immigrant children dropped off at the US southern border. Over just six recent days, CBS, NBC, and ABC gifted us 176 minutes of sappy, emotional coverage about minors being heartlessly separated from their parents. They say it’s Trump’s fault for enforcing the law. They say it’s the GOP’s fault for not changing the law. It might even be your fault, just for your being American.


Abuse of any child is, certainly, a bad thing. But, if one is looking to place blame, fault, then why not start with the parents who send their children. And most are sent. They’re “unaccompanied” because they’re not with their parents. The Trump explained as much by Tweet (always with a Tweet…) on June 19th:


Democrats are the problem. They don’t care about crime and want illegal immigrants, no matter how bad they may be, to pour into and infest our Country, like MS-13. They can’t win on their terrible policies, so they view them as potential voters!


This is an ongoing trend of which you are surely aware. America (and the West) is currently undergoing the largest mass migration of humans in recorded history. Since 1965, when US immigration and naturalization law was … tweaked… scores of millions of newcomers have come forth, changing the face of our country. Europe has seen a similar phenomenon.


Trump is correct about the Dems, at least as it concerns their affinity for bad policy. Sen. Dianne Feinstein's Keep Families Together Act, S. 3036, as currently (poorly) drafted would literally exempt almost all parents (illegals, immigrants, or citizens) in the country from federal criminal prosecution. Given what’s become of federal law and law enforcement, that may not be such a bad idea; I doubt it’s what the author originally intended, however.


Much of this mess can be traced back to another Democrat’s bad law. Emanuel Celler’s hideous Immigration and Naturalization Act of 1965 shifted America’s immigration and demography from the traditional to the radical and the globalist. Celler, Ted Kennedy, and other proponents at the time lied when they assured the nation that nothing would change.


And, when did liberals start caring about immigrant children and keeping them together with families in the United States? You might recall the following picture and the young child, Elian Gonzalez, featured therein - the one crying and with the submachine gun aimed at him - courtesy of Bill Clinton and Janet Reno: 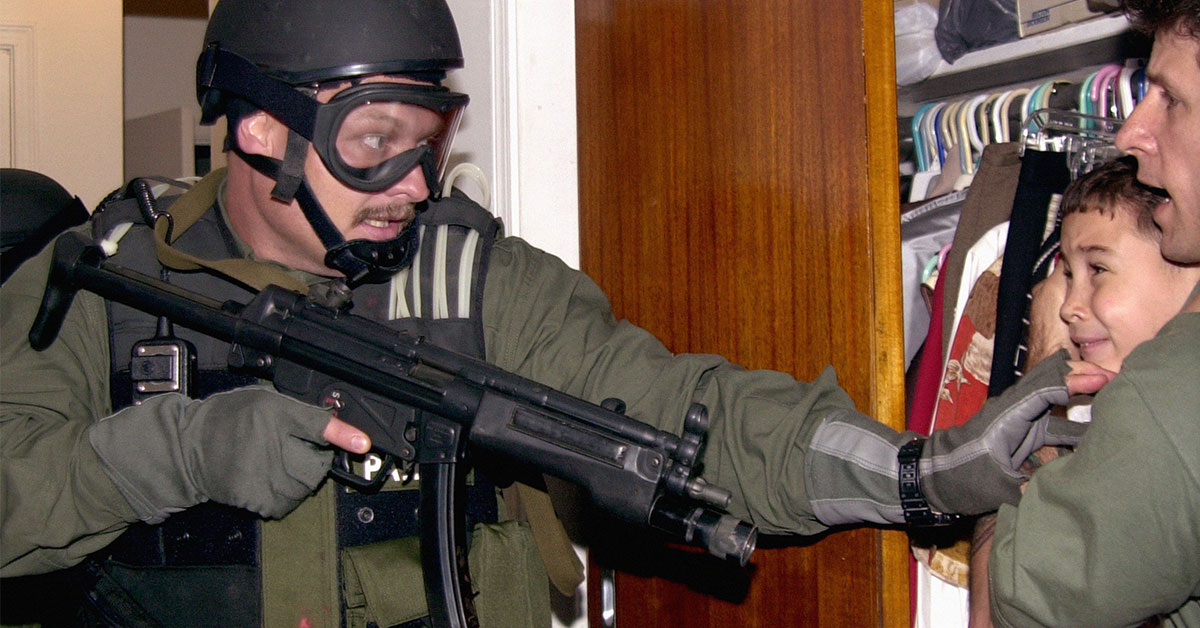 Recall Feinstein's defense of Elian? Me neither. Historycollection.co/CNN.


The current situation in much of Europe is very similar to what we’re seeing in the US. There’s an agenda to replace or augment the native populations with anyone and everyone so long as any and every one of the replacements come from somewhere non-Western.


The German and UK media cry the same tunes about children. Women and children displaced by war and such. It’s amusing that virtually all the pictures on the subject show hordes of fighting age young men. I can’t, off the top of my head, recall the European media lamenting children being separated from families. I’m sure they do as, of course, the breakups do happen.


Wait! I remember one incident! Recently, Tommy Robinson was cut off from his young son - even from telephone contact. Okay, they probably won’t sing much about that case: there’s a gag order and the fact that Tommy’s in prison for exposing native English child predation by the same immigrant types George Soros and company are so fond of.


It’s bad over there, but it’s not terminal, not yet. The whole of Europe is not lost. Italy’s new populist and (get this) pro-Italian government is currently planning the deportation of 500,000 invaders. And they’re actively turning away ships bearing more “women and children.” 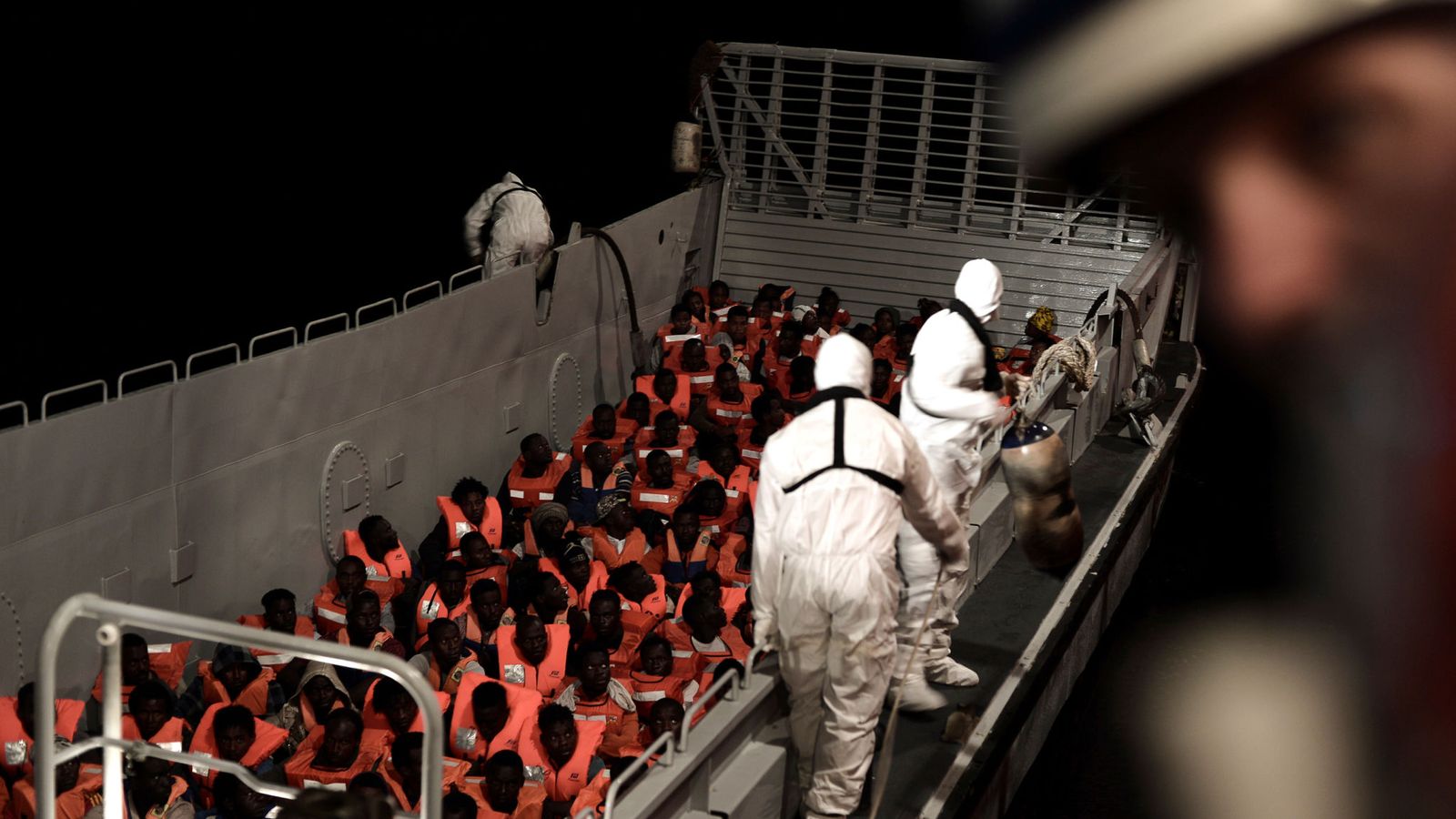 Like this. See all the women and children? Sky News.


The news gets better the farther East one moves across the old continent. Countries like Poland, Hungary, and Slovakia are simply refusing to play the globalist game. The new revived West is likely in Eastern Europe.


Back home, there’s no telling how these episodes will play out. There’s no insurance policy for the continuation of Western Civilization here. The policies of the past fifty years! are, in a word, “unsustainable.” As is, approximately 40 million Americans, in these times of boom, prosperity, and recovery, live in poverty. That’s right now. Worse is coming. Why add to the problems?


Jesus said: “Suffer little children, and forbid them not, to come unto me: for of such is the kingdom of heaven.” Matt. 19:14 (KJV). Making little children political pawns in a culture war, using them as the basis for more untenable laws, and bringing them into a firestorm of economic and geopolitical uncertainty is the opposite. It reeks of sulfur.