"Such is the Duality of the Southern Thing"
- Drive-By Truckers


The story of Mac Gay - poet, professor & man of many talents - is a fascinating one of a true renaissance man & jack-of-all-trades. A fellow resident of the Historical North Covington community, it is the distinct pleasure of Yours Truly, TPC Editor MB McCart, to do a feature profile piece on this righteous dude. Mac is a truly a unique fella. A Character's Character, if you will. A synergy, or perhaps a synchronicity, of many attributes that seems to somehow define...something. I'm not exactly sure what that something is, but I know it is something, and that it's important.

My first memories of Mac Gay were at Newton Co. High School in the early 90's when I was a student there. I never had him as a teacher, though, but my brother & several of my friends did. Mr. Gay was different. For one thing, apparently he would sometimes cuss in class. That was a big deal & naturally scored him major points with a lot of high schoolers. Later, my brother would tell me that Mac taught high school classes more like a college professor. One of my best friends in school told me that the man was obviously brilliant, but maybe a little crazy. 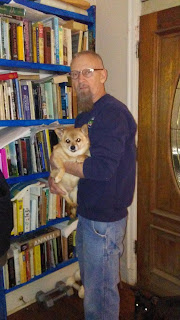 A few years later is when I actually got to know Mac. At that time he'd moved on from teaching & was working in construction. I'd see him a good bit when he would swing by Bess's Place to eat. I always enjoyed seeing him & talking with him. He was different, marched to the beat of his own drum. I liked that. And now, after having been neighbors with him for over a decade, that impression has only grown.

But enough about my personal recollections.

Mac, as mentioned, is a man of many talents. Originally a student & later a teacher of science, Mac would eventually get his MFA & now teaches English at the Newton campus of Georgia State University. He is also an award-winning, published poet. His most recent offering - Pluto's Despair - is a wonderful chapbook that contains 25 poems. More on that in just a bit...

Mr. Gay originally matriculated at Tennessee Tech where he played football for a year before taking two degrees from the University of Georgia. Poetry was always a passion of his but something he didn't really pursue until later in life. The journey of how he got from there to the here & now is the really good part.


For many years Mac was a big fan of drinking. A long-time drunk, in his own words, it made for some interesting adventures. Truman Atkins, Principal of Newton Co. High back in the day, was apparently, like many of us, a big fan of Mac's, and seemed to always be understanding when the call would come from jail explaining why a certain science teacher wouldn't be making it in that day (*ed.note: I definitely got the impression this happened more than once...).

Later, after he'd gotten out of teaching and was doing a few different things, he felt compelled to complete a "spiritual journey" - hiking the Appalachian Trail. The saga that lasted 4 months & 9 days was a major, epochal event for the professor & seemed to be a reboot & battery recharge for the next chapters in his life.

A few years later is when he got into jazz piano. I'd heard accounts from the time that he was really quite good. He mainly played w/ a bass player doing standards, most often over in Olde Town Conyers. I actually remember thinking at the time - and the legend grows...


As Mac & I discussed, poetry is unlike any of the other arts. With poems, you're just out there in front of God & everybody. No musical accompaniment; no oils, paints or canvas. It's just your words & oftentimes it's not very many words that you're working with. It takes a certain bravery, and certainly a honed skill-set.  Mac went on to say that he's been writing poetry for so long that he will very occasionally sometimes even have a rhyme or two here or there. 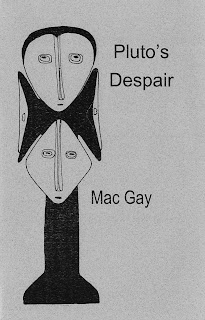 Pluto's Despair, published by Kattywompus Press out of Sommerville, MA, is a true work of art. It's magnificent. Mac's third published book, it has been very well-received by the poetry world (and yes, there is a poetry world out there).

Leon Stokesbury, award-winning poet, had this to say:


" From out of rural Georgia comes a mind that sees at once both the horror & the comedy of the human condition. The best poems of Mac Gay's fine & funny book seem like little lightning bolts that stopped just before they hit the ground."


Yes, Leon! That's what I was trying to describe at the top of this piece. Thanks.

Let's get into some of the poems.

The boy in "The Boy" is made head of the Boy's Studies Program which includes courses like Stone Skipping 101 & Cane Pole Fishing in Small Ponds. Things are going great. "Yet somehow things went south: At 21, for some odd reason, they gave him socks, shoes, and a tie, and the transfer - a demotion to the Division of Man."

The eponymous poem of this collection is really the pièce de résistance.

"...nowhere near the largest,
certainly the most distant,
the most cryptic and aloof,
secluded in the hinterlands,
enigmatic as Salinger."

"Bipolaresque" speaks to the "downside of this cursed manic-depression."

"Doppler Effect" is another of my favorites that perfectly analogizes the aging process to that particular phenomenon, though defining the source & the observer in the effect could be another discussion for another day.

The last one I'd like to share with you is one I'll print in toto & that was showcased by North of Oxford. "Closure" is a piece that deals with one the overarching themes of many of Mac's works - his late father.

Closure
.
That’s what Dad always wanted.
“Close the door behind you,” he’d snap,
or “Did you take out the trash?” The man
hated loose ends, any task dragging
from one day into the next. “You
finish your algebra?” he’d fling at me
blind from behind his newspaper.
Or “Let’s finish trimming these hedges
before darkness takes us over.”
(Nothing was worse than uneven
Red-tip Photinias.) But the thing
he hated most was getting old:
“Old men are like broken tools
or leaky buckets,” he said,
“or the invisible man in the movies,
just fading and fading until he’d
have to wrap himself with rolls of gauze
just so folks would know he was still there.”
So Mom took some comfort later
from his bad good luck. That
Sunday morning he left with Bo
to put a neck yoke on the crazy cow
that kept jumping over the fence.
He aimed to be through before church,
and he was, almost: unconscious
as a stone by noon, but
his dawdling heart kept
beating till half past five.


On the heels of the success of his most recent work, Mac will have a new one out next March - Ghost Hunt. And vist Kattywompus Press to purchase a copy of Pluto's Despair.

I'd like to thank Mac for agreeing to let me interview him for this piece. It was truly my pleasure, and the "interview" really just turned out to be one of the best & most enjoyable conversations I've had in quite some time. He really is a cool fella. And like my high school buddy said back in the early 90's - he's definitely brilliant, and maybe a little crazy. And that, to me, is a good thing.


Marshall "M.B." McCart is a jack-of-all-trades, amateur philosopher & theologian, and a semi-professional ant-hill kicker that resides deep in the heart of the Georgia Piedmont. A man perhaps of some talents, McCart claims mastery of none. At his core, he seeks to explain the peculiar essence of "The Esoteric South" while maybe sometimes thinking about the meaning of life.

In his spare time, McCart is the Editor-in-Chief of The Piedmont Chronicles, dabbles in Real Estate & Real Estate Instruction, plays Americana music & is a business manager & independent contractor.

A proud father & husband, he likes to cook & is an enthusiast of UGA athletics, Led Zeppelin & Hunter S. Thompson.